The Love & Loss Of Norwegian Wood

Singapore -- In ‘Norwegian Wood’, the male protagonist remarks that he doesn’t go all the way out to make friends as they only lead to disappointment. Hmmm… seems pretty pessimistic. Even if this is a high tendency for him, surely, it cannot be so in every single case? How about just being friendly, without expectations of reciprocation? To befriend others is a way of befriending one’s cheerier self too. 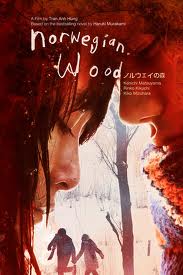 He meets the female protagonist, someone trapped in the past. As she put it, she prefers to relive the time from 18 to 19. Her ex-boyfriend had killed himself, seemingly due to the frustration of not being able to make love to her. Hmmm… sex is obviously overrated here, till it led to the ultimate violence – to his own life. She saw being able to ‘come’ with him to be symbolic of accepting him, and blamed herself for ‘rejecting’ or ‘not wanting’ him.

Yet another tragic case of mixing up love with sex. Love is not sex and sex is not love. The latter might or might not be an expression of the first, and the latter is surely not a must for love to be there. In fact, isn’t love without sex all the more pristine, untainted by lust? The Buddha had great and pure love for all beings – and he never felt urged to consummate with anyone! Then again, we are not Buddhas yet, exactly due to our misplaced values.

The male protagonist waits on indefinitely for her to move on, to heal from her sorrow, and wonders if he himself should move on – due to the indefinite waiting. Time slipped by, as she wallows in her sorrow and he in his sorrow of her being in sorrow… till she finally takes her own life. Greatly grieved, it was as if she had passed her burden of sorrow on to him to bear, a sorrow that came from her deceased boyfriend?

The truth is, her sorrow was clung on to by herself, just as the surviving guy clung to his own sorrow. The titular song ‘Norwegian Wood’ sings, ‘I once had a girl, or should I say she once had me.’ The truth is, we can’t have anyone, when we can’t even cling on to our changing selves, while we cling helplessly to clinging itself, to the idea that the beloved is someone to have and to hold. The Buddhas love all, yet they do not cling. Theirs is true love – that we should emulate in good time!