The Dark Dharma of "Harry Potter & the Order of the Phoenix"

Singapore -- In the publicity blitz of this instalment of the Harry Potter series, it was described to be, once "again", "darker and edgier" - than the previous episode of course... which was also dubbed "darker" than the episode before! Even most of the sets of the movie look literally darker! This is interesting. 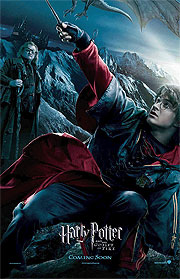 With much speculation on the possible impending death of Harry Potter (played by Daniel Radcliffe) by the end of the series, just how much darker can things become? With darker storylines for films these days, probably "demanded" by audiences who are becoming increasingly numb to the "same old" goriness and violence, it is as intriguing as it is disturbing how much darkness the movie industry can create and take.

Just as the child actors of the series are growing up in real life, so does the fictitious Harry Potter and his readers grow up - to face the reality of life, with its dark side too. With the further loss of innocence with the coming of age, there are stronger yet still subtle hints of "sex and violence" in this episode. Of course, they are still mild in comparison to other films meant for adults only. Harry steals a longer kiss, and wand-waving magic is no longer mere conjuring of harmless fireworks - there is actual inflicting of pain. There are even "hints" of the problems of substance abuse and gun control. Yes, the wands are as good as "guns" - with potential to protect or harm, while casted spells are like incendiary "bullets".

Harry is accused of lying about the return of the "Mara-like" dark lord Voldemort (played by Ralph Fiennes), who wishes to build an army to wreck havoc. This reminds us of the Buddhist scriptural "Evil One", Mara - the personification of death and desire. He already owns "ten armies" - namely, sense pleasures, discontent, "hunger and thirst", craving, "sloth and torpor", fear, doubt, "conceit and ingratitude", "gain, praise, honour and undeserved fame", and "self-exaltation and the disparaging of others". Quite a formidable list of spiritual enemies! In a way, the disbelieving teachers and students in denial of Voldemort's return with a vengeance shows that they have been conquered in part by Mara's armies! Seeing through the delusion and the urgency of the situation, Harry forms an "army" to ward off the impending darkness.

The world is such that whistleblowers of warnings are often seen as fools who do not know any better. Under such conditions, despite being the underdog suffering in indignation, the truly compassionate and wise are compelled to rebel for the cause, even if in secret, as in the case of Harry and company. Bodhisattvas in their right mind do rebellion when necessary too! It is also worth noting that many great truths were first seen as heresy or lies. Take the belief in a flat Earth for instance, or the Earth being in the centre of the universe. With the stubbornness of a closed mind and heart, the most cherished "truths" are often one's greatest delusions.

Harry was charged before the school's board for casting a powerful spell, though it was for defence and to save. This is reminiscent of the Buddhist disciplinary rule which forbids monastics to openly display their psychic powers - for there is the danger of drawing unnecessary attention and inflation of the ego, among many other complications. Supernormal powers by themselves also do not mark one's level of spiritual cultivation anyway. Even Mara and Voldemort has such powers! However, the use of psychic abilities to save or to teach under extreme circumstances is another matter.

The greatest magic is nothing without the direction of a well-mastered mind. In this sense, the greatest magic is a fully mastered mind, with which psychic abilities are natural by-products. This is emphasised by the oft-repeated admonishment for Harry to develop sharper concentration. In this sense, "magic" is only limited by one's will. Harry faced the challenge of training his mind to be so strong that Voldermort (or "Mara") has no way of seizing control of it. Voldermort's mind was his strongest weapon, while Harry's mind was his own best defence.

Harry expresses his fears to Sirius (played by Gary Oldman) on his visions of Voldemort - "This connection between me and Voldemort, what if the reason for it is that I’m becoming more like him? I just feel so angry, all the time. And what if after everything I’ve been through, something’s gone wrong inside me? What if I’m becoming bad?" Sirius skilfully replies, "I want you to listen to me very carefully, Harry. You’re not a bad person. You’re a very good person, who bad things have happened to. You understand? Besides, the world isn't split into good people and death eaters. We have all got both light and dark inside us. What matters is the power we chose to act on. That’s who we really are." Indeed, we are all connected to Mara as long as we are unenlightened. When we give way to our defilements, we become like him. But greater than our "Mara-nature" is our Buddha-nature - our capacity to let the good side of us win our dark side in each moment.

So will Harry Potter die by the end of the series? Maybe... not. However, as another fantasy writer, Neil Gaiman once wrote in "The Sandman" series, "... the real problem with stories - if you keep them going long enough, they always end in death." Even if Harry survives the series, death is still eventual! Too dark a thought for a "children series"? There is hope in Buddhist thought though. There is a way out - Nirvana. Harry, like all of us, will die - unless he becomes enlightened in time, thereby transcending the cycle of life and death! By the end of the movie, it is still unclear as to the significance of the phoenix in the order, but the phoenix is a symbol of rebirth. Thus, my calculated guess is that Harry will die, but not really die!