Serendipities at every turn on this island 'pearl'

Colombo, Sri Lanka -- The sound of Buddhist chanting grew louder as my travel companions and I entered the compound around the "temple," where flickering torches lit the smiling faces of sedately circling monks as the warm tones of their voices carried through the impenetrable darkness on a chilling, flag-fluttering breeze. 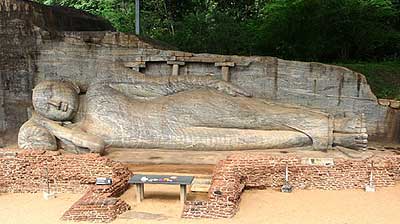 The night's rain had stopped, and we were elated as dawn's light filtered through the clouds and the view gradually opened up around us as the pitch dark gave way first to gray and then to endless shades of green. Soon, a sea of clouds was spread out beneath us, with misty ranks of distant mountains and hills rising through it as we soaked in the wonderful vista.

It was Jan. 4, 2011, and we had risen at the ungodly hour of 2 a.m. I don't normally wake so early, but I made an exception because my travel companions and I were setting off on a pilgrimage to the holy peak of 2,243-meter Sri Pada in the highlands of Sri Lanka. Though not the highest mountain in the land - that is 2,524-meter Pidurutalagala - impressively conical Sri Pada is its most frequently climbed.

The trail was at first gentle and flanked by stalls selling religious trinkets, warm clothes and snacks as it wound steadily up a valley with a stream rushing down it, occasional steps hinting at what was to come. All was dark except for the pool of light from my headlamp and the dim, well-spaced lights beside the trail. The steps became more frequent, then all too soon the path became a staircase climbing up and up ever more steeply as it disappeared into the perfect umbra ahead.

Ever higher we climbed, becoming increasingly tired as it seemed this was an ascent without end. Then suddenly, the "plod, plod, plod ... pause" rhythm of our rigors ceased as we found ourselves among a throng of pilgrims, hikers and chanters on the very top. In my case, that meant it was time to strip out of sweat-soaked clothing and don multiple warm layers.

A short while later, dawn crept in weakly, and soon afterward the pilgrims — long hopeful of a clear sunrise, but disappointed today - departed, and we more-or-less had the mountain to ourselves (along with the colorful birds that make it home).

The imposing peak of Sri Pada is a one-stop shop for rapid religious conversion, since it's possible to change one's faith four times here in as many minutes and still be in the right place. The entire tip of the peak is a walled "temple" (no photographs allowed) devoted to a rock held holy by Buddhists, Hindus, Christians and Muslims alike, for that particular summit rock formation carries an indentation that's recognized by all four faiths as a "sacred footprint." Buddhists are minded to regard it as an imprint of the Buddha's foot; Hindus attribute it to Shiva; undoubting Christians consider it was made by St. Thomas; and Muslims know it is Adam's. Perhaps you have heard of Adam's Peak - well, this is it: Sri Pada!

From Sri Pada's holy summit the view takes in a significant span of Sri Lanka: mountains, forests, lakes, valleys, streams and waterfalls; enough, you'd think, to give the wide-eyed viewer a grasp of the whole country. Yet to the north, invisible in the far distance, stand the ancient capitals, the cultural heart of the country; to the south lie the mountains and the rain forest; to west and east the coasts are not visible through the cloud. To stand atop Sri Pada literally feels like being on top of the world.

Shaped like a teardrop falling off the subcontinent into the Indian Ocean, the South Asian island nation of Sri Lanka makes a big splash these days as a wonderful destination for tourism, and by no means just for mountain hiking.

Yet until just a few years ago, many tourists and their governments considered Sri Lanka off-limits because of its quarter-century-long civil war. From mid-1983 onward, anti-government insurgents, known as the Tamil Tigers, fought for a separate Tamil state in a bloody war that claimed an estimated 80,000 to 100,000 lives and brought widespread hardship to the island before they were finally defeated by the Sri Lankan military in mid 2009.

Once hostilities ceased, reconstruction of lives and infrastructure began apace, with Japan actively involved in funding a number of those efforts. Today Sri Lanka, at peace, holds its arms open to visitors from abroad in a warm welcome.

This is a country of contrasts and variety crammed into a small area. Located between 5° and 10° N of the equator and between longitudes 79°-82°, it has a decidedly warm tropical climate - though as I found out, that doesn't rule out the possibility of feeling cold on the peaks! The climate here is complex, dependent on wind direction, proximity to the mountains or sea and the prevailing winds, which bring monsoon rains to different parts of the island at different times of year. It is hottest (over 30° C) during May and June, before the summer rains; the northeast monsoon winds bring rain from the Bay of Bengal during March and December.

To sum up, though, all this really means is that you would be well advised to carry an umbrella - and be prepared for some serious humidity at times!

Brolly-toting apart, the real challenge in visiting this small country with a big heart lies in deciding where to invest your time. Should it be spent deriving an education from the country's extraordinary and ancient cultural heritage, or in acquiring a suntan while relaxing at one of its many fine beach resorts? Should your stay be a kind of Buddhist pilgrimage, visiting Sri Lanka's innumerable holy sites, or should it take the wilder option of hiking and exploring its mountains and watching its richly diverse tropical wildlife?