Ritigala, Sri Lanka -- Part of the Cultural Triangle, Ritigala is one of the less visited but most legendary ancient sites of Sri Lanka. Situated 188 km north-east of Colombo in the North Central province, it is right between the ancient cities of Anuradhapura and Polonnaruwa midway on the Habarana-Maradankadawala (A11) road. 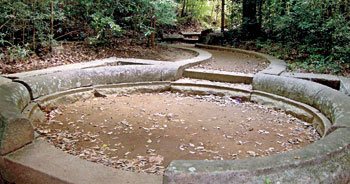 We chose to visit Ritigala as a day trip, from Kandy. Travelling to Matale and Dambulla we then took an off road from Kekirawa town towards Ganewalpola and then on to Ritigala. It was a two and a half hour drive from Kandy.

There were a few other visitors when we reached the foot of the range. The Ritigala mountain range, spreads over a 3776-acre (1582 ha) land, a Strict Nature Reserve managed by the Department of Wildlife of Sri Lanka together with the Forest Department.

One of our group began to tell us the epic story associated with the mountain. Rich in chronicles woven together with history, legend and mythology, the source of the name Ritigala is arbitrary – “Gala” means rock in Sinhala, but “Riti” may have come from the abundance of a variety of tall evergreen tree that can be seen in the forest: Riti (Antiaris toxicaria) with a trunk as straight as a pole. “Riti” is the Sinhala word for pole. On the other hand “Riti” may have originated from the Pali word “arittha”, meaning ‘safety’.
The last and smallest "roundabout" with well preserved curved curbstones

Its proud history goes back to the time of the Ramayana. This legendary mountain is believed to have been the launching pad of Lord Hanuman’s (the monkey lord) gigantic leap from Sri Lanka to India, to tell his master King Rama, where his wife, Queen Sita was being held by King Ravana of Lanka. Folklore claims that the evergreen nature of the Ritigala forest range is due to some medicinal plants dropping off from the chunk of Himalayan forest that Hanuman was carrying back to Rama's brother, Prince Lakshmana who had been wounded in combat between Rama and Ravana .

At the office of the Department of Archaeology by the entrance to Ritigala, a guide accompanies you giving historical details of the site. According to our guide, Ritigala had been used as a place of refuge, from as far back as the 3rd century BC by Prince Pandukhabaya(377-307 BC), King Dutugemunu (161-137 BC) and King Jetthatissa in the seventh century. Ritigala had also been used as an ancient Buddhist monastery by hermit (Pamsukulika) monks who practised extreme austerity. This fact is evidenced by the rock inscriptions discovered in some of the 70 odd natural caves at the site, dating back to the 1st century BC.

The guide informed us that what we see today are the remnants of the monastery that King Sena I, built in the 9th century AD for these Buddhist monks. The Archaeological Department has painstakingly restored many of the ruins.

The site reminded me of the open theatre complex at the University of Peradeniya. There before us were the remnants of a huge construction that looked like a polygonal audience of a huge arena. What resembled the seats was made of huge rectangular stones. Only a part of the construction was restored. The other part consists of scattered stone slabs.

I imagined people sitting on this huge arena but the guide informed us that this is the bund of a large man-made reservoir, with a circumference of 1,200 and not as I imagined an open theatre!

The inside is lined with stone steps to protect it and also to provide access for bathers. The top of the bund is also paved with large stones, he said. The path we strode leading to the ruins ran along the southern bank of the reservoir. And in one of the corners of this polygonal tank we could see a stream pour forth. Today this reservoir is abandoned and wild greenery has filled the base which is without water.

From the site of the tank and stream we started climbing up the mountain on a stone path of about 1.5 metres wide, carefully laid with interlocking four-sided slabs of even stones. The path was edged with proportionate curbstones, and we noticed the inner sides hewed in to accommodate space for the horizontal slabs. I marvelled at the exquisite craftsmanship of the workers who had created this in the 9th century AD. The thick canopy of tall trees reduced the blazing heat of the noonday sun. It is said that this path set through the tranquil surrounding of the jungle was used by monks as a long meditational pathway.

Meandering along this paved path which runs for about 1000 feet we came across three major stops along the way. These must have been some circular construction, of which, only the basement remains today. The first of these “roundabouts”, roughly halfway along the path, is the largest, while the second and third were progressively smaller. They might have been summer huts or resting points along the way. The craftsmanship of the curved stone curbstone was impressive.

The pathway led us to some remnants of the building complex where the monks lived. There were three such extraordinary stone sites, all aligned in the same direction. Each was built in accordance with the unique architecture known as “double-platforms”, the courtyard sunk below the ground level of the surrounding area, characteristic of other forest monasteries as well.

To the right side of the first “double-platforms” structure lie the ruins of the monastery’s hospital wing. We can still see parts of grinding stones which were used to prepare the medicinal herbs, leaves and roots. There were huge stone cut Ayurvedic oil baths where a person would be immersed in medicinal oils. There was even a decorated urinal stone in this hospital wing.

Absent were Buddha statues, stupas/ pagodas, image houses, temples or Bo trees. Our guide put this down to the intense asceticism and detachment of the Ritigala Monastery monks.

By the 10th-12th century AD, following the Chola invasions, the Ritigala monastery was abandoned by the hermit monks. The jungle and bandits took over. Chola invaders destroyed the buildings and it was rediscovered by British surveyors after seven centuries of dereliction, in the 19th century when it was explored and mapped by the first Archaeological Commissioner in Ceylon H. C. P. Bell in 1893.

Ritigala is also a biodiversity hot spot in the dry zone. The steep mountain clad in evergreen foliage is covered with dense jungle and is the watershed of the Malwatu Oya which feeds the Nachauwa tank and Kalueba Ela which in turn feeds Huruluwewa. Beyond where the human trail ends, it is said that the jungle is home to wild elephants, leopards, sloth bears and diverse bird life.