Visiting the birthplace of Japanese Buddhism

Mt. Koya, Japan -- I was struck by a surprising thought as I slid open the paper screen doors: Monks make wonderful gardeners. Below me was a beautifully crafted oasis, nicely pruned pines and maples swaying gently in the summer breeze. I listened to the soothing sound of trickling water as I sipped bitter green tea. It was serene, peaceful, perfect. 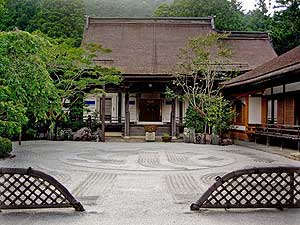 << Rengejoin Temple on Mount Koya, Japan. For centuries, Japan’s Mt. Koya, near Osaka, has been a destination for those seeking peaceful meditation. Visitors today can stay at one of the Buddhist temples that host guests. At Rengejoin, where monks rake the gravel into swirling geometric patterns, you have the chance to eat and meditate with the monks or just take in the quiet beauty of the place. (Kate Graham)

I had arrived at Rengejoin, an ancient Buddhist temple set atop Japan's Mt. Koya. I had crossed the threshold that morning a weary traveler, seeking sanctuary from the punishing heat and breakneck pace of a typical Tokyo summer. For 1,200 years devout Japanese have made this mountain pilgrimage, drawing strength from their visit to one of the country's most sacred spots, the birthplace of Japanese Buddhism.

But lately a new demographic has swelled the ranks. Young professional Japanese women are shunning luxury spas and returning to their cultural roots, choosing temples for a chance to live, eat and pray with the monks.

I set out alone in search of the peace promised by my friend Hiromi, who clapped her hands in delight when she learned of my planned journey. "It is the original detox," she said as we wilted in Tokyo's heat, "a real rest for body and mind."

I thought of Hiromi during that morning's journey. As I switched from futuristic bullet train to subway and then to slow-moving six-car train, I stole a glance at a young, impeccably dressed Japanese woman who took a seat across the aisle.

She too boarded the train at bustling Namba station and at first sat stiffly upright, clutching her designer bag to her chest. Soon, she was so soothed by the view before her that she unwound, bento box open and shoes removed.

Japan's mountain region has views worth savoring. The gentle sway and slower pace of our train meant time to enjoy the landscape. Finally, at Gokurakubashi Station, I transferred to a cable car for a steep 10-minute climb through foliage and fog, arriving 3,280 feet above sea level.

Mt. Koya has 120 temples, and 53 offer rooms to visitors. Some are large and imposing; others tiny and intimate. Bewildered by the choice, I'd pre-booked two where some English was spoken. I was reassured by my choice as I entered Rengejoin. A large gravel garden, raked by the monks into intriguing geometric swirls, lay adjacent to dark wooden buildings with dramatic tiled roofs.

Suddenly a monk appeared in a bright orange robe. His hair was closely cropped and his face split into a smile as he gave a deep bow. Swapping my shoes for slippers, I followed his swiftly gliding footsteps, treading along wooden floorboards that emitted odd noises. "They sound like birds," he explained in deep resonating English. "We call them nightingale floors."

In the reception office we knelt on floor cushions and I learned the rules of temple life. No food could be brought in; monks eat a strict meat- and fish-free diet called shojin ryori, and so must the guests. Times are strictly kept. Breakfast is at 7 a.m., meditation is at 5 p.m., dinner is at 6 p.m. and then bed. My face involuntarily registered my surprise, and he smiled before adding, "Morning prayers begin in the ceremony room at 6 a.m. Guests are most welcome."

My bedroom was small and simple, with pale tatami mat floors and elegantly shabby screen walls depicting simple mountain scenes and calligraphy. The only furniture was a low dark wood table and cushions. I noticed that all walls could be retracted, giving the temple flexibility in the room size offered.

Suddenly a deep gong resonated throughout the temple; meditation class was about to begin.

A smiling monk dressed in a flowing blue-and-white robe welcomed me into the ceremony room, which was filled with flickering candles, lanterns and the strong scent of incense. As my eyes adjusted to the dimness, I took my place on a tiny round floor cushion.

The monk appeared at the altar and issued simple instructions to his five students. Cross your legs, straighten your back and take deep, slow breaths, he told us.

It wasn't easy. As the 30 minutes drew to a close, my legs ached, but my mind felt unusually still and quiet.

I found that dinner, like bathing, is communal in temple life. In the large tatami-matted dining room, 18 guests knelt. Before them were dinners made up of beautifully prepared tempura, soups, pickles and vegetables. Young, smiling monks, whose training included room preparation and cooking, flitted among us pouring bitter green tea.

After dinner, Kiyomi Soeda, the temple owner, appeared. Tucking her tiny figure into a traditional kneeling pose, she spoke for 30 minutes about her extraordinary 87-year life. The postwar poverty, the scorn she had suffered for studying English, the marriage to a priest who brought her to the temple and the battle to save it from ruin. Her joyful optimism and sparkling eyes helped explain the temple's success.

By 8 p.m., bed clearly beckoned, but there was one last temple rite to be completed. Like everything in Japan, bathing is steeped in ritual. Changing into a simple summer kimono (yukata), guests walked to the gender-segregated bathroom, where, naked, they washed thoroughly while perched on the low stools provided. Only when scrupulously clean can you enter the piping hot bath, surrounded by your fellow guests. After 15 minutes, I emerged, lobster red and fighting to keep my eyes open. I collapsed on the freshly laid futon bed and fell asleep quickly.

By 10 the next morning, I was at the door of Shojoshin-in, my second temple, on the other side of town. My body ached slightly from sleeping on an unforgiving surface. The paper-thin walls also meant every shuffle and snore were clearly heard. Nonetheless, I felt fantastic, completely tranquil.

Meditation took a back seat to sightseeing that day. After peeking into my new room (small, yet well designed, opening directly onto a lovely water garden), I visited the centrally located Tourist Assn., rented an English audio guide and set off to wander Mt. Koya's temples and shrines. A few stood out: the towering two-tiered Konpondaito Pagoda and Kongobuji, temple of the Buddhist Shingon sect.

Despite its being peak summer season, the town was surprisingly empty; quiet contemplation was easy when the only others present were a few elderly Japanese women painting by koi ponds and young couples walking beneath towering lacquered gates.

On the advice of the monks, I scheduled one site for the twilight hours. Okunoin temple is set deep in Japan's largest wooded cemetery and is best seen at dawn or dusk. I entered the grounds tentatively but was immediately struck by an atmosphere of peace and tranquillity. The scattered gray stone pagodas and stupas were worn by time and covered in soft moss. A winding path was lighted by lanterns; pines and cedars towered above, all but blocking out the darkening sky. A 20-minute stroll led me over bridges and streams to Okunoin temple, the final resting place of Kobodaishi, the founder of the Shingon Buddhist sect.

The effect of this solitary walk stayed with me late into the evening. Even at 5:50 a.m. the following day, when the gong woke me for prayers, I felt serene. Kneeling in the busy ceremony hall, I was captivated by the 40-minute ceremony. While three senior monks chanted, many guests queued to the altar, making offerings and lighting incense.

Among the group were two young Japanese women, slim and elegant in their designer lounge wear. I walked out behind them as the ceremony ended, morning rain pummeling the roof above us. As they vanished behind another door in the temple compound, I wondered if, like me, they would leave Mt. Koya with a new spiritual skills. At the very least, I had gained the ability to meditate and had a renewed appreciation for going to bed early. Two things that every modern woman should learn.