Time for a closer look at universal human values

Timphu, Bhutan -- In the past 20 years, our small country has been bombarded with modern influences from television to cell phones, the Internet, celebrities, fashions, superhero models, advertising, and news sound-bites. 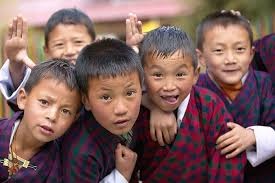 << Is the teaching of "Universal Human Values" harming Bhutan's culture and Buddhist values?

The changes are not all bad - Bhutanese now have electricity, better medical care and less poverty, are living longer, and are more literate. But some changes are less savoury. Modernization has brought pollution, environmental destruction, unprecedented rural-urban migration, and challenges for youth that have led to widespread youth unemployment, drug abuse, crime, gang violence, and even suicide.

No wonder that, in the midst of this rapid change, our political and religious leaders, educators, as well as ordinary Bhutanese, have started worrying about how to preserve our profound, ancient wisdom traditions, and the wholesome values which have been passed down from generation to generation and shaped the Bhutanese Identity. In response, for example, all schools, will now begin their academic year with a week-long course on “values.”

However, hasty implementation of “solutions” to the new challenges we face without proper research and analysis may actually cause more long-term damage to our culture and traditions than the problems they attempt to overcome. The danger is particularly acute when, attracted by skillful “packaging”, we import new ideologies and philosophies from other countries, which we don’t really understand.

One example now sweeping Bhutan - already a required course on several Royal University of Bhutan campuses - is Universal Human Values (UHV) or Jeevan Vidya (JV), propounded by Shree A. Nagraj and now propagated as a textbook by three Indian IT and engineering professors.

Is UHV compatible with Buddhism?

I want to make clear at the outset that I have no wish to disparage the noble intentions and motivations of UHV proponents, nor the value such systems may provide certain individuals. But I do not see sufficient careful analysis to justify the present widespread propagation of UHV in official circles and educational institutions in Bhutan, especially when I hear UHV described as “Buddhist” in its view and approach.

UHV claims not only to be a set of good values, but also a system for dealing with life and death, truth, consciousness, the nature of “self”, liberation, and more - just as the very essence of Buddhist teachings do. If UHV is incompatible with the tried, tested and proved Buddhist view and path, what danger is there in forsaking our own ancient and still highly relevant wisdom traditions?

I have not studied UHV in depth, so I will not attempt a rigorous analysis of its compatibility with Buddhist views. However, I can, at least, suggest the kinds of questions that UHV proponents are bound to explore in depth before they institute this very recent Indian import as a brand new foundation for Bhutanese conduct and understanding.

Does the UHV view of “Self (‘I’)” align with the core Buddhist view that there is no inherently existing self, that self is an illusion, and that this illusion - or delusion - is the root of all suffering?

UHV defines emptiness as the “Space” or “nothingness” between us. Is that compatible with the Buddhist understanding that self and other are both empty of inherent existence?

Where in UHV are there teachings on compassion and karma, so central to Mahayana Buddhism, and what are they? Is the UHV teaching that the “jeevan atom” wants to live, be happy and “evidence its being” congruent with the Buddhist teaching that true happiness comes from putting others before one’s self?

Was the UHV founder’s meditation and samadhi that he says failed to provide answers, meditating with what Buddhists call the “right view”?

“Truth is communicable in words for those who want to understand.” How does this assertion by Shree A. Nagraj match up to the Buddha’s very first teaching that the truth is inexpressible? Or to the Buddhist teachings that state language itself is an artificial, conceptual construct that is entirely incapable of communicating the truth?

Can UHV even conceive of the other realms of existence, beyond the human and animal realms, that are described in the core Buddhist teachings?

The UHV founder claims: “There are no mystical powers or miracles in existence - I have seen this precisely.” Yet the Mahayana sutras and Vajrayana Buddhist teachings are replete with actions beyond the narrow limits of human reason.

The UHV founder says he “concluded that orderliness [a core UHV goal that is “the essence of becoming happy”] doesn’t arise from the paths of devotion and renunciation.” Yet those paths are key to Vajrayana Buddhism.

Does the UHV view that “existence itself is coexistence” match or contradict the Buddhist understanding of dependent arising?

Where in UHV is the rigorous and meticulous understanding of the workings of the human mind that can be found in the Buddhist abhidharma teachings?

The UHV founder claims: “The ‘spiritual’ has remained inexplicable in human history. We can understand spirituality very easily in a few seconds.” How does this statement compare with the experience of seasoned Buddhist practitioners?

He says being happy is “the goal of Jeevan” and claims: “I achieved happiness on the basis of understanding of existence.” How does this fit with Dzongsar Khyentse Rinpoche’s insistence that the Buddhist path is “not for happiness” but is about wisdom and seeking the truth?

The UHV founder says: “The value of human being has remained undiscovered by humankind.” But hasn’t this truth been fully examined and taught for 2,500 years in the Buddha’s teachings on “precious human birth”, which also include detailed descriptions of the requisite freedoms and conditions?

Having asked myself all the above questions, I wonder if perhaps I should first have asked:

“Have those promoting UHV in Bhutan actually read, studied and understood the UHV teachings and the writings of its founder?”

“Are those promoting UHV familiar with the way the Buddhadharma and their own country’s wisdom traditions answer their timeless questions of human existence?”

Take a step back and look!

Shree A. Nagraj, the UHV founder says of his own “realization”:

“What I have found has not come out of any scriptures of past.”

In stark contrast, we Buddhists adhere firmly to the view that lineage is of paramount importance to a spiritual path, and aim always to follow the example of our awakened forebears. Moreover, for Buddhists, lineage is our ultimate guarantee of authenticity and reliability. Because of lineage, we know that teachings we receive and practice have been thoroughly examined, tested and practiced over hundreds of years.

As a result, not only has it been proved that these teachings work, but also that they tell the truth. And it is this great and well-honed tradition - our tradition - that cautions us not to confuse the packaging with the essence, and to be wary of half-baked plagiarism.

As I have only looked at some UHV materials and writings of its founder, I cannot claim to be an expert on UHV. And I am not saying that it has no value whatsoever. But I do urge the Bhutanese authorities and educators to take a closer look at a system that they are now imposing on unsuspecting students and citizens of Bhutan. At a minimum, let them clarify where and how UHV contradicts and diverges from our ancient Buddhist wisdom.

The present embrace and spread of UHV and its imposition on RUB students is particularly strange at a time when only Taktse College of Language and Cultural Studies, among all nine university campuses in Bhutan, offers its students even minimal exposure to Buddhist philosophy. Ironically, in the west, where Buddhism was almost unheard of two generations ago, the Buddhist teachings are so highly valued that some of the most prestigious universities - like Oxford, Harvard and Berkeley - devote entire departments to Buddhist studies where students can study for doctoral degrees. Yet in our own country, which is supposedly so steeped in Buddhist values, the study of Buddhism has been effectively sidelined.

Part of the blame definitely rests with us so-called Buddhist teachers who, closeted in our monasteries and cut off from the modern world, sometimes become so lost in our ancient texts and rituals that we fail to relate to the people’s most pressing needs.

But the challenges we face in Bhutan today are so serious that, if not properly addressed right now and in a very real way, not only will we be led astray as individuals, but our unique Bhutanese values, tradition, heritage and culture - of which we are so proud - will be undermined.

We all bear responsibility. We Buddhist teachers have the responsibility to demonstrate the direct relevance of the Buddha’s teachings to modern life and needs, and those with power and authority in society also have a responsibility to examine closely the ideas they want to impose on our youngsters.

A good place for us all to start is simply to recognize, value and take pride in the treasure we already have right at our fingertips, and then to study and practice diligently in order to achieve what our forefathers and mothers achieved down the ages, all the way back to Guru Rinpoche.
TOP