Gangteng Goenpa  The Gem of Phobjikha

Timphu, Bhutan -- The Phobjikha valley is filled with the sounds of sacred prayers as the reincarnations of Terton Pema Lingpa Peling launch the drubchhen ceremonies for the consecration of the Gangteng Sang Nga Choling on October 1. 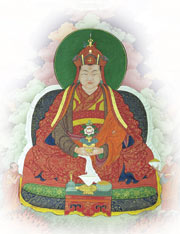 The royal family, dignitaries, and devotees from around the world will attend the auspicious consecration ceremony of the restored 395-year old seat of the Peling lineage on October 10, the 11th day of the eighth Bhutanese month.

About 2,500 years ago, as the Buddha sat in meditation, rays of light emanated from his forehead and beamed towards the north. When his disciples asked him what it meant, the Buddha explained that it was a sign that the remote and untamed lands in that direction, wild with demonic energy, would see the light of the dharma.

The Buddha’s prophecy was realised by a succession of saints, who created a civilisation that took roots deep in the Himalayas. Societies were calmed by the compassion of Chenrezi and the people energised by the power of Guru Rinpoche. The dharma flourished, through the centuries, carried from generation to generation by enlightened masters, who used ingenuously skilful means to preserve and strengthen spirituality.

In Bhutan, Guru Rinpoche introduced the tradition of hidden treasures (terma). The Guru hid sacred images and scriptures in the crevices of nature to tide over degenerate times. It worked. Enlightened tertons – discoverers of the sacred treasures – were to retrieve the Guru’s teachings from the natural environment. They revived important icons of Buddhism from rocks, mountains, and lakes. Bhutan became a bastion of the Vajrayana tradition.

The best known among Bhutan’s “King Tertons” was Pema Lingpa, born in 1450 as a heart emanation of the Guru. In 1476, when he was 26 years old, Terton Pema Lingpa saw Guru Rinpoche in a mystic dream and received instructions on 108 treasure coves. Starting with images and scriptures, that he retrieved from a burning lake, the Mebar Tsho, Pema Lingpa took Bhutanese Buddhism to a new level through a series of sacred treasure teachings.

Believed to be an ancestor of the Wangchuck dynasty, the Terton magnetised generations of people, establishing the Peling tradition, and enriching Bhutan’s Buddhist heritage.

In the centuries that followed the incarnates of Pema Lingpa, an unbroken lineage of predestined sages, established Gangteng Goenpa as a prophesised abode for the Gangteng Trulku, the body emanation of the Terton.

Historical records say that Terton Pema Lingpa once visited the Phobjikha valley, conferring blessings on the local people. He looked up at the strategically beautiful hill that commanded a view of the broad valleys stretching out into the distance. Juniper and pine-covered ridges spiralled up the valley through the green meadows and fields. Dotted by the colours of magnolia and rhododendra, the ridges folded like the petals of a giant lotus flower with the summit forming the heart of the flower.

It was Gyelse Pema Thinley, the first Gangteng Trulku and grandson of Pema Lingpa, who built the first structure in 1613. The lhakhang was expanded by the second Trulku, Tenzin Legpey Dhendup (1645-1726) into the unique and vibrant dzong that exists today.

The construction of the lhakhang was a mix of legend, human artistry, social and communal cohesion, and religious festivity. All the construction material came from the locality. The giant trees, that covered the hill slope around the lhakhang, provided the pillars and beams, door and window frames. It is believed that Delep, the local guardian deity, created a landslide in the mountain opposite the construction site to provide the stones.

The Umze of Lhalung Monastery in Tibet was hired as the zowpon to head a team of Bhutanese artisans from the surrounding communities. The people, devotees of the Gangteng Trulku, provided the labour. Gangteng Goenpa became an important religious, cultural, and historical monument in the evolution of Bhutanese culture, religious history, and the Peling tradition of Buddhism.

In 2000, the ninth Gangteng Trulku, Kunzang Rigzin Pema Namgyal, opened a new chapter in the monastery’s rich history when he began the process of restoring the lhakhang, a massive Nu 700 million project to preserve this remarkable legacy for the future. History has been relived over the past eight years as the 395-year old Gangteng Sang Ngag Choiling monastery was restored and reconstructed in the spirit of its original aura and grandeur.

The old structures, carvings, and paintings were preserved where possible, their originality skillfully protected. The 104 new pillars came from the region, ornately carved and painted by the nation’s most gifted craftsmen. The mural paintings on the lhakhangs are done in dotshoen (mineral paints), the most aesthetic and durable of the traditional mineral paints.

On the command of His Majesty the fourth Druk Gyalpo, the royal government provided technical supervision and necessary technical and architectural support, and raw material for the restoration.

The Gangteng Trulku personally mobilised the funds and inspired the best-known contemporary craftsmen and artisans to strengthen the structures and restore the traditional architecture, painting, carving, and sculptor. The 15 geogs of Wangduephodrang dzongkhag sent three carpenters and two skilled workers each. The people of the Gangteng, Phobjikha, Ada, and Bjena gewogs provided labour.

There has been a minimum of 100 workers every day, slowly strengthening a historic monument of intricate proportions with traditional tools. “For us this is not work, it is merit,” said a carpenter from Phobjikha. “To think that we were a part of this … how much more fortunate can anyone be?”

On September 14, a large gathering at Gangteng Goenpa was blessed by the unfurling of the nation’s first Sampa Lhuendrup Thongdroel, a masterpiece commission by the Trulku for Nu. 2.3 million. This special Guru Thongdroel, adorned with precious stones offered by devotees, will be unfurled every year during the Gangteng tshechu.

The restoration of Gangteng Goenpa became a process that strengthened the community spirit among the people. The Gangtoeps are known to be a happy community, their lifestyle representing a close harmony with each other and with their environment.

The gentle valley slopes around the monastery are covered by Alpine trees and the valley floor by a thick growth of dwarf cane brush. The rich wildlife include colourful pheasants like the nine-coloured Himalayan monal and the gorgeous satyr tragopan, the Himalayan black bear, barking deer, leopards, and the elusive red panda.

In winter Phobjikha is the chosen home of the rare Black-Necked Crane, which migrates from the Tibetan plateau in the north. More than 200 cranes roost in Phobjikha, which is the single largest wetland habitat in Bhutan. Bhutan protects the endangered bird and maintains a close watch over this elegant visitor that glides gracefully over the valley every winter.

Life is demanding in the picturesque valley of Phobjikha. The weather is harsh and the terrain rugged in this 3,000-metre glacial basin where farming is a major challenge. Buckwheat has been the traditional crop and potato was introduced in the 1960s as a cash crop. The farmers close their doors during the cold winter months and move to the warmer valley of Wangduephodrang.

The people of Gangteng respond to these hardships by enjoying life. They have no doubts that their community spirit is drawn from the historic Gangteng Goenpa. They take part in every religious ceremony and festival and the annual Tshechu, a festival of Peling dances, is performed and enjoyed by the entire community. The Gangteng Trulku says that the people light butter lamps on every auspicious day, attend every tshechu and ceremony, and take full part in major projects like today’s restoration. The Trulku himself is a central figure in all the ceremonies.

“We’re living happily in this valley because we have a sacred monastery which takes care of our spiritual well being,” said 50-year old Gyem Lhamo. “If there’s something happening at the Goenpa, we just drop everything we’re doing and go there.”

The Gangtoeps also drop everything to sing and dance when they have the opportunity. Preparing for the consecration ceremony over the past few months, the people will present songs and dance,s that are native to their valley, even reviving some that have not been seen or heard outside Phobjikha.

At the helm of today’s historic initiative, the Gangteng Trulku hopes that the restored monastery will last, not for hundreds but thousands of years. But a far more important resolve, says the Trulku, is his mandate to spread the precious teachings of the dharma. His own focus is education through the establishment of shedras (monastic schools), gomdeys (lay monk institutions), and drubdeys (meditation centers).

Today, the Trulku supervises more than 1,000 monks, nuns, and gomchens studying in 30 institutions around the country. Hundreds of devotees study under his tutelage around the world. A number of yogis are in hermitage under his instruction.

Recognised in 1959, the Trulku received all the initiations and teachings of the Pema Lingpa lineage from Dudjom Rinpoche and Dilgo Khyentse Rinpoche and from most of the known masters of the Buddhist world. Under the tutelage of the dzogchhen master Tenzin Dhendup, the former Je Khenpo, the Trulku spent eight years in retreat.

From his abode in Gangteng Goenpa, the Gangteng Trulku dedicates his life to enriching the legacies of Guru Rinpoche and Pema Lingpa for the future.