New Delhi, India -- No less a person than Mahatma Gandhi once estimated that nearly a quarter of Hindus had converted to Islam over the past on thousand years. How true is this statement ? 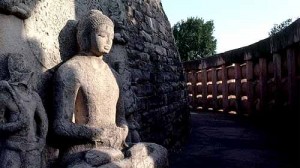 Hinduism has been associated with the Indian subcontinent since time immemorial. The teachings of the sages of the Vedas emanate from the mists of the past with a chain of Gurus and Saints stretching to the modern day. Amongst the myriad of thoughts coming from this ‘land of saints’ range from the pure stream of Vedanta to the mystical experiences of a Mirabai and to the compassion of Guatam Buddha.

By the dawn of the first millennia CE the Hindu world straddled across the same contiguous region as the Buddhist world. Stretching from the islands of the Indonesian archipelago to the wild regions of Central Asia. The Buddhists with an organized priesthood had ranged furthest with missions to the island of the Indian Ocean and across the Himalayas into China and beyond.

A happy coexistence with little conflict to the point where it was common for people of the same region, tribes and even families to be both Hindu and Buddhist. The kings of the nations under Dharma or Dhamma would donate equally to both religious centres and preachers without distinction.

This however all began to change in the seventh century. The Arab tribes erupted from their desert homes armed with the zeal of a new faith Islam burst into the lands of these ancient faiths. The age old faith of Zoarasterism and Eastern Christianity was almost obliterated within a generation up to and including the venerable Persian lands.

After reaching Sindh a decisive repulse from a coalition of Hindu kings in the battle of Rajasthan in 738 AD the Arabs turned their attention to the north. The Chinese empire was defeated in the Battle of Talas in 751 AD and the field of Central Asia with its patchwork of predominantly Buddhist kingdoms was laid open.

What followed was a relentless pressure of Islamisation which lasted for the next two centuries. In this time with the tides of warfare ever changing the Buddhist kingdoms began to fall one by one.

The destruction of the monasteries and murders of their priests led to a leaderless Buddhist community being unable to resist the pressures of the Islamic missionaries and soldiers. A stream of refuges and priests began to head for the spiritual homeland of India lending vigour to the infancy of the much acclaimed bhakti movement. By the end of the millennia the Buddhists had almost been wiped of the map of Central Asia to the borders of India and Tibet and the newly Islamised Turk tribes now eyed the vast Indian subcontinent.

Here meeting sterner resistance after a wave of incursions on an around 1000 AD the Turks eventually broke into the subcontinents around 1200AD leading to a tidal wave of bloodletting that has scarce comparison in human history. The Buddhist regions of Afghanistan and Western Punjab fell rapidly to the Islamic crusaders as did the far flung regions of predominantly Buddhist East Bengal. The same story of Central Asia was repeated with the destruction of the great Buddhist centres like at Nalanda and the slaying of their organised priesthood leaving a confused and leaderless populace.

The Hindus however reacted differently. The existence of numerous tribes and clans and religious groupings led to a deficiency in common action. However each region and tribe despite the destruction of many temples and slaughter of holy men managed to maintain its viability. The absence of an organized priesthood and single doctrine foiled the Turk and Afghan attempted to obliterate the Hindu religion. The defeat of a single Hindu clan in a particular region was quickly replaced by another Hindu tribe/warrior community to fill the vacuum almost instantly. After overwhelming the mainly Buddhist regions the Turks found themselves holding certain urban centres in a sea of Hindu resistance.

The burgeoning bhakti movement helped by the headlong demise of Buddhism, though no Buddhist ideas expanded to cover the entire subcontinent in a challenge to the nascent Islamistation in many regions.

The bloodletting continued. The Muslims historian Firishta in his book Tarikh i Farishta talks of tens and thousands of Muslim solders having to immigrate to India each year to cover the losses in the endless wars with the Hindus. The Hindu kings being pushed back by the heavy Turk Cavalry which had defeated the Crusaders of Western Europe adopted tactics to harry and punish Muslim warriors at each and every opportunity. A bloody stalemate was reached in which it began to dawn on the Muslim armies that the Hindus could not be wiped out in the same manner as the Jews, Zoroastrians, Pharsees, and the erstwhile Buddhists of west and South Asia.

What happened was a regeneration of Hindu thought. A reaction based on dogged resistance backed by religious inspiration. The inspiration allowed the Hindus to stop the Arabic Jihad in its tracks after overwhelming all resistance from the border of India to Spain. It foiled the Turks for three hundred years whilst they beat back the combined might of the Europe in the Crusades. The waves of attacks emanating from central Asia were beaten back on numerous occasions and eve after the plundering and penetrative raids of Mahmud Ghaznnavi and two centuries later of Mohammed Ghori the fighting did not end. Indeed whilst the hapless Buddhists of South Asia were almost wiped from the face of the subcontinent with a large number falling under the flag of the ummah the Hindus crucially proved the ability to regenerate.

The open system of worship without a central authority and a defined priest hood or single place of pilgrimage allowed Hinduism to resist, adapt, regenerate and eventually thrive in the face of genocidal attack. The Muslim historians whilst lauding the achievements of their kings in entering and establishing rule in India lamented their failure to convert the land into the land of Islam. Eventually realising the futility of their operations we have the sight of the Mughal emperor , Akbar renouncing traditional Islam and establishing his own Din i Ilahi in line with the syncretic traditions of the people. When his successor broke this tenuous compromise the Empire was broken into pieces with predominantly Hindu warrior lands rising over its ruins and obliterating the Islamic rule. Indeed by the time of the advent of the British the surviving Muslims kings either had folded to the new Hindu revival or ran into the waiting arms of the British Empire for protection.

Buddhism is happily making a return to India, the land of its origin. Pilgrims from East Asia and the Americas now make pious journeys to the land of Buddha’s Birth. It is however a sober reminder to humanity of the need to preserve an ethos of toleration and acceptance and resistance in the face of genocidal terror. It is the lesson of the history of Hinduism.

The truths of conversion are far more complicated than envisaged by modern day self proclaimed scholars. The idea of a mono religious India prior to the Islamic invasions defies historical truth. A multi cultural, multi religious India was assailed by the determined forces of monotheistic jihad. The end of a millennia of attack saw nearly a quarter of the subcontinent embrace the middle eastern faith but the concept that a uniformly Hindu nation became in part Muslim is a falsehood. The very word for ‘idol breaker’ is but shikan – (lit- breaker of the Buddha) a tragic reference to the obliteration of the once widespread Buddhist faith from the lands of its birth and beyond. In contrast – though suffering terrible pain the Hindus resisted, regenerated and in parts expanded showing clearly that the values of Dharma are essential not only for survival but for the very future of mankind