In the shade of enlightenment

In Bodhgaya, Anusha Parthasarathy tries to pluck a leaf from the Bodhi tree as a souvenir

Bodhgaya, India -- The moment our car turned into a narrow, rocky path off NH 2 and I began to hang on to dear life, I knew we had arrived in Bodhgaya, a Buddhist town in Bihar. 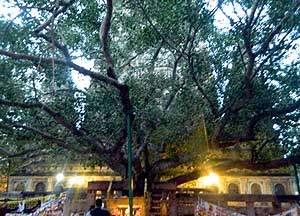 Here, Presidential Suites are affordable to the common man and barring the occasional ATM there are only small neighbourhood shops. There is sparse vehicle traffic but the large numbers of cows, horse carts and cycle rickshaws that stalk you till you take a ride make up for it.

Bodhgaya is ironically small since it is home to colossal statues, picturesque monasteries, a rich religious past and an ancient tree. But the most important thing to take note is to look where you walk. Pavements are few and you need trekking gear to tackle the generous globs of dung and garbage, and potholes. But Bodhgaya still charms with its friendly people and cows that walk up and eat vada out of your hand.

It doesn't take much time to look around the entire town, since there are only four or five streets that you can walk into. You could complete an entire tour in less than three hours. Accommodation is only average but the smallest of restaurants boast of ‘Amrican Chopsew' and ‘American breakfast' and ‘multi-cuisine'. I pick two of the most popular religious places in Bodhgaya to visit first; the 80-feet Buddha statue and the Mahabodhi Temple.

The former looks blissful, surrounded by his disciples, and as you walk right up and strain your eyes against the sun you are humbled by the size of the statue. Little boys speaking flawless Tamil try to palm off Buddha figurines for Rs. 30 but if you haggle hard, they give in for half the price and say “Take, take” with a dismissive wave.

The Mahabodhi Temple is the most popular tourist and religious attraction in Bodhgaya, where the Bodhi tree under which Buddha attained enlightenment is protected and preserved. The temple's architecture is intricate and shows Buddha in different poses, while on the inside is a large gold figurine wrapped in sacred orange.

The temple comes alive at dusk with the cacophony of birds that occupy the surrounding banyan trees, loud voices from the souvenir markets outside the temple and the constant chanting of the monks in prayer. But behind the temple is the tree that brings millions of Buddhists and tourists to this part of Bihar.

The Bodhi tree, under which Buddha gained enlightenment in 623 B.C, stands protected by stone slabs and strong metal gates, behind which you can see a glimpse of the Vajrasana, the diamond throne that Emperor Ashoka had set up as the Seat of Enlightenment. Buddhists from all over the world sit beside the tree and offer prayers to the Enlightened one. I try to walk to the lowest hanging branch to pluck out a leaf as souvenir but realise that they are erected at a height by pillars, possibly to stop visitors from doing exactly what I'm trying.

There are also monasteries of most Buddhist nations that are sprinkled across the town; Japanese, Bhutanese, Chinese, Thai and Sri Lankan temples to name a few. Each structure is unique, designed specially to match the traditional architecture of that country. The Buddha statues too differ, from gold plastered, to wearing traditional Bhutanese attire.

All temples have one rule in common; that you are not allowed to sleep within its premises no matter how calming your prayers are.

There is also the Bodhgaya museum, multimedia centre and the Muchlind Sarovar, an important religious place near the temple, where Buddha once meditated. According to Buddhist belief, there were sudden winds and rain and a serpent coiled itself under Buddha like a seat and opened its hood over him. But apart from that, what you can take back is a perennial calm that surrounds this ancient town.

The next day, after a breakfast of sandwiches, we are back on the national highway when all of a sudden we pass by three of the four sights that Buddha saw before he left home to become an ascetic; an old man, a hit and run accident on the highway, and monks passing in maroon robes.