New Delhi, India -- Supreme spiritual leaders representing most nations with a sizeable Buddhist population are close to deciding on the formation of a new international body based in India that aims to give a united voice to Buddhism in international forums like the United Nations (UN). 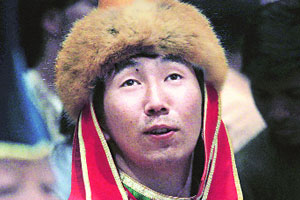 << A Siberian delegate at the Delhi Global Buddhist Congregation. AP

The first ever congregation of Buddhist spiritual leaders, “supreme patriarchs” and representatives of Buddhist sects that began in New Delhi today also saw most leaders condemning Beijing for mixing religion with politics. The four-day meet began in the shadow of the cancellation of Sino-Indian border talks following New Delhi’s refusal to interfere with the conference.

However, Indian leaders like New Delhi Chief Minister Sheila Dikshit and Leader of the Opposition Sushma Swaraj who were scheduled to speak stayed away from the conference, as did government officials and diplomats expected to attend. A sizeable delegation of 35 representatives from China also didn’t make it despite confirming their attendance.

Lama Lobzang, the President of Asoka Mission that is organising the event, said it was the first time that spiritual leaders belonging to all Buddhist traditions were meeting at a common platform.

Beijing had demanded that the Buddhist congregation, where the Dalai Lama was scheduled to deliver the valedictory address, be deferred. Indian Council of Cultural Relations Chairman and Rajya Sabha MP Karan Singh, among the few political dignitaries present, inaugurated the conference.

The first day saw a closed door meeting of top spiritual leaders - from Vietnam, Sri Lanka, Myanmar, Thailand as well as from Taiwan, Malaysia, Mongolia and Bhutan - on the formation of an International Buddhist Confederation based in India that would act as an umbrella body for Buddhism. Sources said that China’s demand to India that the conference be deferred was condemned by all quarters.

“There was an almost unanimous condemnation of China’s stance on the conference. Leaders did not appreciate the mixing of politics with religion,” sources said.

A top aide of the Dalai Lama also said that the event was purely religious. “It should not be used by any nation or individual for a political purpose,” Tempa Tshering, a representative of the Tibetan spiritual leader in New Delhi, said. He added that the only motivation for Dalai Lama’s scheduled attendance at the event was to meet religious leaders.

However, the conference has the tacit support of the Indian government and the plan reportedly was to turn it into a major symbolic event that would for the first time bring together the three strands of Buddhism — Theravada, Bodhisattvayana and Vajrayan — and announce the creation of a unified Buddhist body.

In his message to the congregation, the Dalai Lama too lend his tacit support to the unified body by saying that there is a need to improve communication in the Buddhist world. “There have not been many opportunities for Buddhists to come together and discuss issues of common concern. Now and in the future we need to encourage and foster an exchange of knowledge and experience among our different traditions and improve communications amongst us,” he said.

The event will conclude on Wednesday with an address by the Dalai Lama and the expected announcement of a new world body to represent Buddhists from across the world.