Gangtok, Sikkim (India) -- Hundreds of monks from Buddhist monasteries in the Himalayan state of Sikkim voted on Saturday to choose a Lama as their representative in the state assembly. 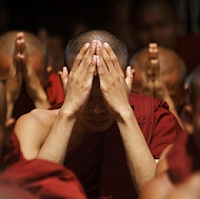 The 'Sangha' seat is the only one of its kind in India which was created under Article 371 (F) of the Constitution to give monks representation in governance as was done during the rule of the Chogyals.

The Himalayan kingdom had merged with India in 1975.

Dressed in their traditional flowing maroon robes, monks came out in large numbers in polling booths to stand in queue like other voters, election commission sources said.

"This is very unique to Sikkim as in other places you will not find a monk coming out to vote for another monk. They are very active, but very peaceful," Sikkim's Joint Chief Electoral Officer Urvashi Poudyal said.

Only monks could vote and contest in the reserved 'Sangha' seat.

There were 2904 monk voters registered for the 'Sangha' seat. Out of them only 45 were women.

Three Lamas were contesting for the seat - Palden Lachungpa for the ruling Sikkim Democratic Front (SDF), Sonam Lama for Sikkim Krantikari Morcha (SKM) and Tshering Lama for the Congress.