New Delhi, India -- With eight Indians and 44 foreigners on board, the Buddhist Circuit Special Train, operated by Indian Railway Catering and Tourism Corporation (IRCTC), embarked on its first journey of the season on Saturday. 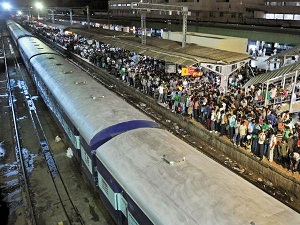 The train steamed out from Safdarjung station here and it would take the travellers on a spiritual trail of some of the most famous landmarks associated with Lord Buddha.

The eight-day itinerary would cover places like Bodh Gaya, Rajgir, Nalanda, Sarnath, Kushinagar, Lumbini and Shravasti. Agra has also been included in the final leg of the journey to facilitate a visit to the Taj Mahal.

"The package allows the travellers from abroad to explore, experience and rekindle their civilisational linkages with India. The itinerary has been hammered out in a way that makes it all-inclusive and extremely convenient for our patrons," said A.K. Manocha, chairman and managing director, IRCTC.

"The travellers can visit most of the landmarks associated with Lord Buddha in a single journey," he added. The other departure dates of the train are December 26, 2015 and January 9, February 13 and March 12 next year.

"The Buddhist Circuit Train has been gaining popularity in international markets and it attracts clientele from China, Taiwan, Japan, Thailand, Malaysia, Indonesia and Sri Lanka, among others.
The train fits into the scheme of those who are looking to undertake a Buddhist pilgrimage in India," said Manocha. IRCTC had launched the Buddhist Circuit Special Train in 2007.