Assam, India -- A plantation drive was carried out on Tuesday at Bodoland Buddhist Park along Gaurang River bank involving villager and social activists. 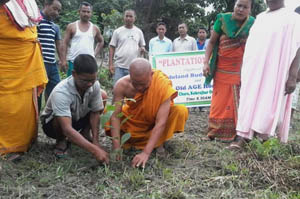 BTC Secretary Rahila Brahma kick off to start the plantation programme with planting a sapling on the river bank,which was organised by Bodoland Buddhist Park management committee to make green and beautification of Kokrajhar.

Around 300 plants were planted on the day along River bank side to protect as well beautification of Gaurang River side in Kokrajhar.

Brahma said that it was an initiative to make green nature and beautification in the region.

Anjali Bodosa,organiser of the programme told that the plantation programme was carried out to plant saplings through which natural beautification would be restored.
TOP