Jammu, India -- The Tibetan Buddhist spiritual leader, Dalai Lama, who arrived on the first ever two-day visit to Kishtwar on Saturday, prayed for peace and prosperity of Jammu and Kashmir. 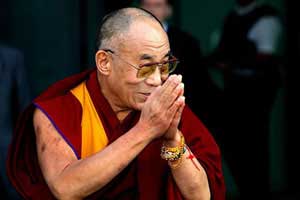 Thereafter, Dalai Lama visited a local Gumpa, where he was received by the devotees with traditional fervor and gaiety.  He offered special prayers and prayed for half an hour and afterwards addressed 5000 people, who had gathered there to hear him.

In his address, the Buddhist spiritual leader wished well being to the entire humanity and prayed for peace and prosperity of Kashmir.

“I propagate the message of peace everywhere I go. I had wished to visit this place before too, but it came through only now. Today, I have come to Jammu and Kashmir with this message of peace and communal harmony. People of all faiths and religion are living in freedom and harmony,” he said and urged people to uphold the ethos of peace and communal harmony.

“India is a civilized country so is Jammu and Kashmir.  People should maintain communal harmony and avoid violence,” the Dalai Lama said.

He lauded Chief Minister Omar Abdullah’s endeavours for equitable development of all areas and all sections of the society. He also referred to his association with late Sheikh Mohammad Abdullah and Farooq Abdullah and appreciated their role in strengthening Jammu and Kashmir’s high values of communal amity.

Earlier, while welcoming the Buddhist spiritual leader, chief minister Omar Abdullah described him as messenger of peace. “Peace and détente are the subjects of global significance in present day world scenario and every human being is equally important stake holder in global peace and tranquility,” he said adding the tolerance, co-existence and mutual understanding of each other’s views are imperative to create a peaceful order in the society and live in an atmosphere of brotherhood and harmony.

He said people of Paddar were eagerly waiting for the Dalai Lama’s visit to the area and their desire has been fulfilled today. “I congratulate you for this occasion”, Omar said and wished well being and prosperity to them and the people of the State as a whole.