Dalai Lama says there is no gender bias in Buddhism

Lahaul, India -- Tibetan spiritual leader Dalai Lama said in Himachal Pradesh's Lahaul district on Friday, there is no gender bias in Buddhism and nothing prevents a woman from becoming his successor. 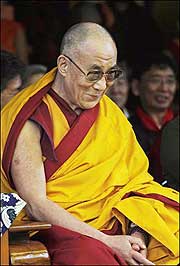 "So the purpose of the incarnation is to serve people about dharma (faith). If the circumstances are such, female form is more useful, then why not," said Dalai Lama.

He also added that that the female Dalai Lama should be attractive.

"And I also mentioned in case Dalai Lama's incarnation one female comes then must be very attractive female. So the very reason, you see more influence to others, an ugly female then may not much effective," added Dalai Lama.

Dalai Lama is on a four-day-long visit to the region, to give discourses on Buddhism.