Colombo, Sri Lanka -- The Sinhala term Mihintale is derived from Pali Mahindathala, the place of Thera Mahinda. It is well known that the first meeting of Thera Mahinda with King Devanampiya Tissa took place at Mihintale on Poson Full Moon Poya day. 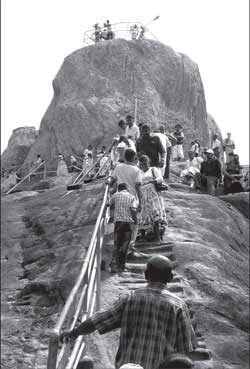 This meeting is described in chronicles and Buddhist literature overlaid with legends and miraculous events. But there is no doubt about the historicity of the event because an early Brahmi inscription at Mihintale refers to the Stupas of the Buddhist missionaries Mahinda and Itthiya.

Acceptance of Buddhism by Devanampiya Tissa and the people, ushered in a new era which put an end to prehistoric religious beliefs such as worship of trees, mountains, stars, gods and various spirits known as Nagas and Yakshas. In fact Buddhism brought people throughout Sri Lanka in to one cultural entity believing in common ideals and practicing common rituals. This unity also paved the way for the popularization of the Pali canon, Brahmi script and art of writing, brick and stone architecture and common sculptural forms all over the island.

In the course of time, Mihintale mountain evolved to be an extensive religious complex with a large number of chaityas or dagobas and other religious buildings covering an area of 460 acres. The most important dagobas are Kanthaka Chetiya, Mahasaya, Ambasthala Dagoba and Indikatu Saya. But there are several smaller ones spread all over the place. This is one reason why the locality came to be known as Chetiyagiri: the mountain of dagobas. The other reason is that Thera Mahinda was born in a place called Chetiyagiri in Vidisa in India.

The dagobas did not exist in isolation. Devotees flocked to them to perform rituals. To attend to their religious needs a substantial number of bhikkhus were required. The mountain was also an ideal place for meditating bhikkhus who sought salvation. They lived in caves at the initial stages of introduction of Buddhism. But later shifted to comfortable monasteries in the vicinity. According to the Chinese traveller Fa-Hsien who studied Buddhist scriptures at Anuradhapura for two years between 411-413 A D, there were 2,000 Buddhist monks living at Chetiyagiri during his time. The vestiges of extensive monasteries and the rice container or bath oruwa found at the 77 feet by 14 feet refectory are clear archaeological evidence which suggest the existence of a large number of bhikkhus in the complex.

The complex had grown in size with added new features until the end of the Anuradhapura period. For instance the (36 feet by 15 feet) elephant pond which is referred to as Nagasondi was built in the sixth century by Aggabodhi I (571-604). In the ninth century Sena II (853-887) constructed the hospital at the base of the mountain with amenities such as a dispensary, a waiting hall for patients, an area for examining patients, meditation centre for ailing monks, rooms for in-house patients and a medicinal trough for immersion therapy.

The Kaludiya Pokuna monastery to the West of the main monastic complex was a creation of Kashyapa IV (898-914) in the tenth century. This monastery which covers an area of 183 square metres is referred to as the Hadayunha monastery in the chronicle. The Kaludiya Pokuna or the Black Water Pond is 200 feet in length and 70 feet in breadth. Some of the buildings in this complex clearly indicate how early caves were gradually transformed in to brick and stone buildings with walls outside the cave.

A significant feature at Mihintale is that bhikkhus of various sects had lived in different monasteries in harmony as it was the case of Abhayagiri in Anuradhapura. For instance, the Kaludiya Pokuna monastery was the abode of monks of the Mahayana or Dhammaruchi sect. Ninety one copper plates with Sanskrit phrases from the Mahayana text Pragna Paramita have been discovered at IndikatuSaya in 1923. A Sanskrit inscription on a rock close to the Ambasthala Chaityaya refers to the Mahayana concept of Buddha’s Sambhogakaya, Dharmakaya and Nirmanakaya. 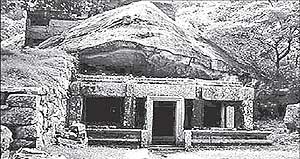 Mihintale also provides clues on the individuals who patronized some of its constructions. Of course, the royalty and the nobility were the main patrons but people belonging to various middle level social strata too had contributed to some constructions. Most of the earliest caves were donated by ordinary individuals who could afford to prepare them for habitation by cutting drip ledges. One of the inscriptions at Kaludiya Pokuna states that stairs leading to a building there was donated by a jeweller named Mulaguta.

The long slab inscription of Mahinda IV (956-972), situated closer to the refectory is particularly important in understanding monastic administration at Mihintale in particular and elsewhere in general. According to the inscription income from large extents of land endowed to the monastery was utilized to remunerate lay individuals who performed services at the monastery in cash and kind. In most cases plots of land were also allocated to them on service tenure.

It also states that officials of the monastery must not extract personal services from the people engaged in the monastery nor should they send such people out on other services in the neighbourhood.

Mihintale was partially neglected from the beginning of the 11th century and completely abandoned from the middle of the 13th century as a result of the collapse of the Rajarata civilization. Only in the beginning of the 20th century attention was again paid to this large monastic complex and the structures we see today have been restored by archaeological commissioners H. C. P. Bell, A. M. Hocart and S. Paranawithana.