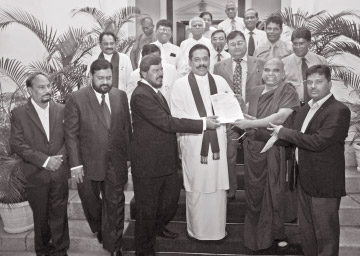 They also discussed the possibility of the installation of a statue in Colombo in honour of Dr Babasaheb Ambedkar, the Indian Buddhist savant who was instrumental in bringing a large number of Indians, especially down trodden people (Dalits) into the fold of Buddhism.

On October 14, 1956 at Deekshabhoomi, Nagpur Dr Ambedkar publicly converted to Buddhism. He took the three refuges and the Five Precepts from a Burmese Buddhist monk, Bhadant U Chandramani and in his turn administered them to the 600,000 of his followers who were present.

The Indian Buddhist team arrived in the country at the invitation of Dr Lilaknath Weerasinghe, President 'Success Sri Lanka' based in Kandy.

'Success Sri Lanka' hosted the delegation during their stay in Kandy and Colombo and accompanied them to Anuradhapura with the assistance of the All Ceylon Buddhist Congress and coordinated by the German Dharmaduta Society and the Indo - Sri Lanka Buddhist Network, all of which entities constitute Regional Centres of the World Fellowship of Buddhists (WFB).

Ven Banagala Upatissa Nayaka Thera made a public announcement that a suitable portion of land within the boundaries of the Maha Bodhi Society precincts at Maradana, Colombo 10 would be allocated for the installation of the first statue of Dr Babasaheb Ambedkar and close to the pre-existing statue of Angarika Dharmapala, founder of the Maha Bodhi Society. A proposal by Ven .Kirama Wimalajothi Thera to set up an institute to commemorating Dr Babasaheb Ambedkar was also discussed. This proposed centre will provide residential facilities and training opportunities for visiting Indian Buddhist monks and nuns.

It is proposed to set up a Board of Management to plan and administer the premises and the Dhamma teachings. The establishment of a corresponding centre in India is also discussed.

The convening of an International Conference on 'The Revival and Renaissance of Buddhism in India in the 20th Century' has also been mooted.