Lay community, Buddhism, and the role of virtuous monks in Sri Lanka

Boston, USA -- I threw the pot containing my father’s ash to the sea and watched how it drifted away in the current. I had already made up my mind. He was 81 years old, he did his best to serve the society as a teacher, and he saw the fruits of his dedication to raise us. But something started to kick in from within me. It grew and worsened at the departure terminal of the Katunayake airport. I was dipped in a deep sense of sorrow all along the long flight to Boston. 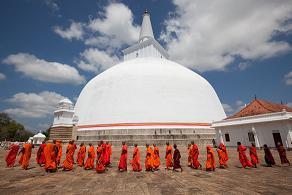 The first thing I did was to drive to the Boston Buddhist Vihara to see a monk. There was visitors around and it was a good opportunity for me to have a very personal chat with the monk. It just came out of me – “venerable sir, I think it is not worth coming back to this World.
Can you teach me how to start meditation?”. It was some kind of a shame for me to ask that question after being a Buddhist for 38 years. Yet, he kindly and patiently explained me what the four Brahma Viharas are (Metta, Karuna, Muditha, and Upekka) and why they are the bedrock of Buddhist meditation practice.

Then, at some later point, the monk moved back to Sri Lanka. I contacted him during a visit back home and asked if I could come to his temple to spend a weekend to practice meditation. Then, he advised me that he is in charge of several temples in the up-country, and the best place would be the Maliyadeva Len Vihara located on the way to Hunnas Falls hotel from Wattegama.

This Len Vihara that consisted of several rock caves is said to have been built in King Walagamba era, a Golden era for Buddhism in Sri Lanka. He took me to a cave where noble Arahat Maliyadeva had resided. I kept staring at where the noble Arahat Maliyadeva had sat in meditation for quite some time because it gave me so much inner strength. Then, we moved to another quiet place, discussed about some deep aspects of meditation, and sat in meditation for quite some time in that evening. What a blissful experience it was!

The next day, the monk had invited some school children to come to the Len Vihara to have a chat with me, because he thought the students would benefit by talking with me about science and the spiritual life. This encounter and subsequent meetings with other villagers and visits to other more “city temples” convinced me that the monk who was giving me meditation instructions was spending a complex life full of social commitments in Sri Lanka.

At some point, he himself told me that striking a balance between the meditation practice and social commitments is so hard in Sri Lanka. I could clearly see why. People, rather than coming to the temple to practice meditation, expected the monk to come to their places to practice rituals like “pirith chanting”, “bana”, “well wishing a new house or a car”, etc.

Ironically, some held such events as a matter of routine than arising out of spiritual necessity. In one such event, I took the monk in my car. The hosts of this event were very kind, and looked very devoted Buddhists. One of the ladies who hosted the ritual thought I too was from Kandy area, and started a discussion about monks from Down-South living in Kandy area.

She referred to them as monks from Dutugamunu’s area, and she had some resentment towards people from the Dutugamunu’s area due to some reason.  I was shocked to see this bigotry, but didn’t expose the fact that I was from the South (Galle) because I wanted to know more about her views about monks and people from the South. Then I noticed that she referred to monks from her area as “ape-hamuduruwo” (our monk), and other as just “hamuduruwo” (the monk).

Later, I had a casual chat with the venerable monk who gave me the opportunity to spend several days at the Len Vihara, about the social aspect of his life. He kindly told me that it is a huge challenge. He said that people are deeply entangled in “sakkayaditti” (the personality view where people cling onto social identities like race, up-country people, down-country people, etc, that solidifies the illusion that a “self” exists), and “Silabbataparamasa” (blind clinging to rituals), in addition to “vichikichcha” (having less confidence in the path of meditation as a cure for their sufferings). He said, one has to penetrate through all these three fetters out of a total of ten in order to go past the first milestone of the fruits of practicing the Eightfold path – known as Sotapanna (one who has entered the stream of healing).
Then, I asked him if he is doing anything to change the status quo in the society. He said, the best he could do was to renovate places like the Len Vihara so that those interested could spend a weekend meditating like I did. He said the Buddhist way is to prepare the conditions conducive to meditation and invite – “come and experience for yourselves” – than forcing those who do not wish to take that path to start practicing Buddhism.

The community in Boston made some contributions to uplift the Len Vihara, but I felt the massive need in Sri Lanka to renovate thousands of such ancient forest cave monasteries for the benefit of those interested to experience the bliss of meditation from time to time till it becomes an integral part of life.

Back in Colombo, I conveyed this need to a top politician in a political party claiming to be the Guardians of Buddhism (Bodu Bala Sena was not existing at that time), hoping some of their energy to protect Buddhism could be channeled to this cause. The straight answer was – “that type of things are not visible”! This was before the war came to an end, and I too was under some illusion about these parties. But I got a sense of respect for him for being honest with me, and helping to confirm to myself that a lot of people like me were sadly misguided.

Through my own experience, I honestly believe that the best the lay community in Sri Lanka could do to protect Buddhism in Sri Lanka is to support monastic monks to serve the lay community through their noble practice. It is like taking a medical advice from a doctor with a sound training, as opposed to somebody with a mere intellectual understanding of medical theories and a stethoscope round his neck (only the right looks).

By looking at the way politics work in Sri Lanka (confirmed by my above experience), it is unlikely that famous politicians claiming to be the Guardians of Buddhism will put their weight behind an honest attempt to renovate monasteries or to foster monastic practice of monks and lay community.

It is more likely that some groups are mere “Buddhist branches” of a political party lining up votes from different streams in the society. Therefore, this small note is for those interested groups in the lay community to think about volunteering or contributing funds to an organized cause to foster monastic practice in Sri Lanka.

This should not be done to show off, or to be a challenge to the more political Buddhist movements, but one that engages everybody. Experience with the right practice can change people. In fact it is not advisable to build a personality view around it. Human bodies are driven by their minds, and minds are occupied by conditioned thoughts. When the conditions change, thoughts change, and behavior changes. So, there is no need to hate any “body”. If a honest attempt is launched by those who are frustrated by the present political movements, a lot of people from within Sri Lanka and those living outside Sri Lanka will help in various ways. I would say, this would have ripple effects in the virtuous direction for the betterment of Sri Lanka.