A Compassionate Constitution for Sri Lanka based on Dasa Rajadhamma

Colombo, Sri Lanka -- Sri Lanka’s Constitution must be connected to its heritage and history. It is a national shame for a country that proudly boasts of a 2, 500 year old history and had won the acclaim of the wider world for preserving its Buddhist heritage in a pristine state, to turn its back on the wisdom of our ancestors on questions of governance and instead turn to the wisdom of somebody else’s grandfathers wholesale for new directions. 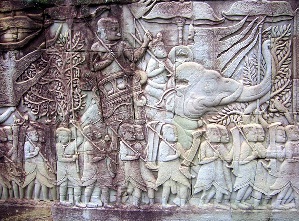 What profound principles shall inform the reform of Sri Lanka’s Constitution is an important question for both the law makers, law interpreters and the general public?

In a recent article published in the Bangkok Post ( March 28, 2015) and carried in the ‘Buddhist Channel’ website, Stephen B Young (global executive director of Caux Round Table), commenting on the preparations being made in Thailand to draw a new Constitution says that Thai Buddhist ideas on governance must be incorporated into the proposed new Constitution.

Some of his ideas are relevant to the public discussion now taking place in Sri Lanka on the reform of our Constitution. Stephen Young warns against relying heavily on borrowing from the Western tool kit of governing arrangements. He asks:

Is Thailand to be in perpetual tutelage to the West? Does the West have a permanent monopoly on truth and justice? Are Western experts and their Thai students to be like Anna Leonowens scolding the children of King Rama IV for not being sufficiently Victorian?”

He frowns on designing a new constitution merely to stop self-serving and corrupt wrongs and excesses of arbitrary power, which in the view of Young ‘is to look backward and not forward’.

He recommends that ‘A good constitution should be designed for the future as architecture, not as interior design for a particular temporary occupant’ .

Tastes in design change rapidly and often. Thailand ‘s many constitutions have suffered from taking this short-term approach. Architecture should be for the ages drawing on timeless principles of harmony and form to inspire and reassure over years to come”.

In the concluding paragraph of his inspiring article Stephen Young says:

In planning their own constitutional future, Thais should take a stand on the best of their traditions and values. Sufficiency economy principles and the related principles of good public trusteeship contained in the Dasa Rajadhamma principles are valuable intellectual resources for a good constitution for Thailand.”

The moral stature of Sri Lanka’s Constitution would be enhanced if it recognizes the claims of other living beings for compassion and appropriate consideration from human beings, and the protection of their legal rights. The philosophy underlying the Constitution must encompass the view that legal rights are not the exclusive preserve of human beings.  This standpoint is consistent with the philosophy underlying the Dasa Rajadhamma which was a basis of governance in the pre-colonial era.

The inclusion of these ideas would enable the Constitution to serve also as a basis for advocacy on behalf of these suffering and unrepresented interests.

There exists an international precedent. India, being conscious of its unique role in conceiving the concept of ‘Ahimsa’ over two and a half millennia ago, has enshrined it in its Constitution.

‘ to protect and improve the environment including forests, lakes, rivers and wild life, and to have compassion for living creatures’  Article 51A (g).

1)      A provision similar to Article 51A(g) in the Indian Constitution requires to be introduced into the Constitution of Sri Lanka, thereby imposing a Fundamental Duty on every Sri Lankan citizen to have ‘compassion for living creatures’, and

2)      The Chapter dealing with the Directives of State Policy in the Constitution of Sri Lanka should include among its objectives ‘the acceptance of State Responsibility for the protection, and the promotion of the welfare of other living creatures’.

The Supreme Court deleted the proposed Article 33 (1) in the 19th Amendment which states ‘that the President shall be the symbol of national unity’ in response to submissions made by lawyers that it was redundant because the national flag as set out in the Constitution already performed that role.

However the submissions made by other lawyers such as Mr. J. Chula Boange that the proposed Article 33 (2) (b) under the 19th Amendment that ‘ it was the duty of the President to ensure the preservation of religious and ethnic harmony’ was inconsistent with the pre- existing Article 9 of the Constitution which gives foremost place to Buddhism and imposes a mandatory duty on the State to protect and foster the Buddha Sasana, did not draw any comment or response from the Supreme Court.

” 9. The Republic of Sri Lanka shall give to Buddhism the foremost place and accordingly it shall be the duty of the State to protect and foster the Buddha Sasana, while assuring to all religions the rights granted by Articles 10 and 14(1)(e).

There is a latent possibility that the new Article 33 ( 2)( b) may lead to a submission to court by an imaginative lawyer that the duty imposed on the President to preserve religious and ethnic harmony qualifies the applicability of Article 9 which gives foremost place to Buddhism, because of the inconsistency that has arisen due to these two provisions.

It would be a disaster for the cause of Buddhism in Sri Lanka, if the Supreme Court were to say one fine day in the light of such a submission that the Judges  hands are tied down to declare and uphold the true aims of Article 9 because they clash with the content of Article 33 ( 2)( b).

To reduce Article 9 to a state of paralysis in a convoluted way through the introduction of new provisions seemingly benign and non – threatening, but yet menacing to the existence of a basic feature and core of the Constitution i.e. special place given to Buddhism in line with historical tradition, is to court disaster and endanger peaceful relations between religious and ethnic communities in Sri Lanka. The special place given to Buddhism is a historical fact and part of the national architecture of the country.

In order to ensure that the President’s duties as laid down in Article 33 (2) are in step and consistent with the provisions of Article 9, I would like to propose that Article 33 (2) be amended to include the following new provisions:

It shall be the duty of the President to:

a) protect the Buddha Sasana, facilitate its preservation and foster Buddhism;
b) invoke the ‘ dasa raja dharma’ as deemed fit in governance;

These are ideals but nevertheless valuable to prevent any mis – interpretation and undermining of the scope of Article 9.

The reading of Article 9 together with the proposed Article 33 (2) carrying the amendments proposed aforesaid would neutralize any mischief, if intended, to downgrade the scope of Article 9.