Kandy, Sri Lanka -- Sri Lanka President Sirisena said the Buddhist philosophy is the noblest gift the country can offer to the world as a Buddhist country. He also stated the new government will implement a well-planned program to propagate the message of Buddhist philosophy to the international community. 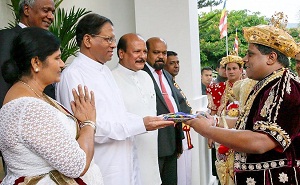 Sirisena pointed out that a good society cannot be built only through physical development of the country. He added he would be dedicated to make a better future generation through spiritual development.

Siresena made these remarks at the completion ceremony of the Kandy Esala Perahera held in Kandy on Sunday.

In keeping with tradition, Diyawadana Nilame of the Sri Dalada Maligawa, Nilanga Dela presented the Perahera Sannasa informing President Maithripala Sirisena of the successful completion of the Kandy Esala Perahera, at the President’s House in Kandy.

The President presented awards and certificates to artistes who participated in the Perahera in making the Perahera a success.