Colombo, Sri Lanka -- "It is with great shock and sorrow that we hear of the passing-away of Ven. Maduluwawe Sobitha Maha Thera on November 8", states the Sri Lanka-China Buddhist Friendship Association in a release. 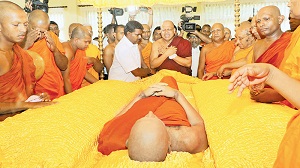 The State Administration for Religious Affairs of P.R.C. and the Buddhist Association of China expressed deep condolence on the passing away of Most. Ven. Sobitha Thera.

The release added: "Most Ven. Sobitha Thera is was committed to carrying forward the Dharma and promoting social justice in Sri Lanka, which earned the Thera great respect and love from the Sri Lankan people.

"Most Ven. Sobitha Thera is a good friend of the Chinese Buddhist community. He had done a lot of work for the Buddhist exchange and cooperation between China and Sri Lanka and he also enhanced the mutual understanding between the people of the two countries and further strengthen the traditional friendship between China and Sri Lanka. Ven. Sobitha Maha Thera's passing away is a great loss to the Buddhism in Sri Lanka and the Chinese Buddhist community also lose a good friend in the meanwhile!

The State Administration for Religious Affairs of P.R.C. and the Buddhist Association of China pay high attention to development of the Buddhist friendly relations between China and Sri Lanka.

"We would like to work with Sri Lankan Buddhist circle to promote the spread of Buddhism in the world. And we will continue to make efforts to enhance friendship between China and Sri Lanka."