From Barbaric Buddhism to Civilized Buddhism 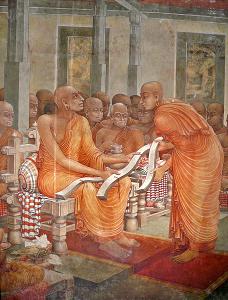 The Buddhists in these countries follow only the Buddhist scriptures Tripitaka (Viniya, Sutta, Abhidhamma), whereas in Sri Lanka the 'Mahavamsa,' which was written by one of the Mahavihara monks (Ven. Mahanama) more than 1000 years after the passing away of Lord Buddha is also considered as a part of the Buddhist scriptures, although it deals mostly with mythical or supernatural Buddhist history, some episodes of which are copied from the 'Mahabaratha' and 'Ramayana.'

Since the Buddhist scriptures (Tripitaka) and the mythical Buddhist history (Mahavamsa) were both written in the Pali language, a Buddhist layperson who does not understand Pali cannot understand the difference between the two and, therefore, he/she believes everything that the Buddhist monks preach, to be the true words of Buddha.

Due to ignorance, even the present day Sinhala-Buddhists still believe that they are blood relatives of Buddha because, according to the Mahavamsa, their forefather Pandu-Vasudeva belongs to the Sakya clan, and is a relative of the Buddha, not realizing the fact that the term Pandu in Pali means Pandyans.

According to Buddhism, a person ordained as a Bikkhu should practice Ahimsa, Karuna, Metta, and Maithriya towards fellow humans, (irrespective of race or religion), not only by words but also in his thoughts and action. Unfortunately in Sri Lanka, due to the influence of the Mahavamsa, a Buddhist Bikkhu is at liberty to engage in racist politics and promote Sinhala-Buddhist chauvinism and hatred, as we see today.

When Hindu/Brahmanical influence posed a serious challenge to Buddhism and when Buddhism started to lose popular support and the patronage from the rulers, the Buddhist institutions in India came under attack. The Mahavihara monks including Ven. Mahanama, the author of the Mahavamsa, witnessed the decline and disorientation of Buddhism in India during the fifth century AD.

The events that took place in India against Buddhism prompted the Mahavihara monks in Sri Lanka to come up with a plan/strategy to protect Buddhism. Due to their strong devotion to Buddhism and desire to consolidate and protect this religion in Sri Lanka they decided to write the Pali chronicles Deepavamsa/Mahavamsa making Sri Lanka a Dammadeepa (chosen land of Buddha where Buddhism will prevail for 5000 years) and creating the Sinhala race by assimilating all the Buddhists from different tribes/ethnic groups into one race and making them the sustainers of Buddhism (Gouthama Buddha’s chosen people) to protect Buddhism in Sri Lanka for 5000 years until the next Maithriya Buddha arrive.

It is the mahavihara monks who assimilated all the Buddhists from many different tribes together and called them Sihala (followers of Mythical Vijaya). There is NO historical evidence what so ever to prove Vijaya’s arrival with 700 men or to say there were Sinhalese during the Early Historic period. The term 'Sihala' itself first appeared ONLY in the 5th Century AD Pali chronicles Deepavamsa/Mahavamsa and that also ONLY twice in the beginning chapters.

To date, no archaeological evidence has been found to prove 'Sihala' existed before that or anything about Vijaya’s arrival. The terms 'Sinhale', 'Hela', 'Sinhaladvipa, etc appeared much later only in the 13th Century AD Chulavamsa and NOT in Deepavamsa/Mahavamsa.

It is said in MAHAVAMSA CHAPTER VII - THE CONSECRATING OF VIJAYA:

"But the king Sihabahu, since he had slain the lion (was called) Sihala and, by reason of the ties between him and them, all those (followers of VIJAYA) were also (called) Sihala."

Why they were not called Sihala? That itself proves that Vijaya and the Sinhala race was a creation of Ven. Mahanama and the Mahavihara monks.

Just around ten lines/verses in the Pali chronicle Deepavamsa about the Elara/Dutugemunu episode was blown up into 11 chapters in the Mahavamsa just to glorify Buddhism and the Buddhist kings against the Hindus. The Mahavamsa author being a Buddhist monk and justifying the killing of around sixty thousand Tamils/Hindus by Dutugemunu is one reason why others think that Sinhala-Buddhism is somewhat of a violent barbaric form of Buddhism where killing Tamils is justified. The killing of Tamils in Sri Lanka by the Sinhala-Buddhists even today is due to this uncivilized and Barbaric ehhno-religion known as Sinhala-Buddhism (or Mahavamsa-Buddhism).

There is a clear record of all the main events of Buddha, the places he visited, with whom he was, where and what he preached and to whom he preached, in the Buddhist scriptures, Tripitika. In order to protect Buddhism in Sri Lanka from those powerful South Indian Hindu kingdoms, Ven. Mahanama wrote the Mahavamsa, in which he has added his own imaginations and myths. He has introduced many events concerning Buddha which never took place, things that Buddha has never said or done, events which are not mentioned in any of the Buddhist scriptures (Theravada and Mahayana).

For example, according to the Mahavamsa, Buddha made three magical trips to Sri Lanka, each time colonizing another area of the island, in preparation for the formal introduction of Buddhism two centuries after his death. One of these trips was to settle a dispute between the Yakkhas and Nagas at Naga Divipa (Ninathivu) where the Buddha tamed the Yakkhas, the non-human inhabitants of the island.

There is no evidence whatsoever to support this claim, other than the three chaithiyas built in the recent past by the Sinhalese Buddhists at 3 different locations to say, 'This is where Buddha came.' Even the footprint of Buddha at Sri Pada (Adam's peak) is only a myth.

According to the Mahavamsa, just before passing away, Buddha has called the Sakka (King of Gods) and told him:

'My doctrine, O Sakka, will eventually be established in the Island of Lanka, and on this day, Vijay the eldest son of Singha Bahu king of sinhapura in the lata country lands there with 700 followers and will assume sovereignty there. Do thou, therefore guard well the prince and his train and the Island of Lanka. On receiving the blessed one's command, Sakka summoned God Vishnu and said, 'Do thou. O lotus-hued one, protect with zeal prince Vijay and his followers and the doctrine that is to endure in Lanka for a full five thousand years'."

It should be noted that in Buddhist scriptures, Buddha has never mentioned about any Hindu Gods, he only talks about Devas and Bramahas from different worlds who have no connection with any Hindu Gods.

Here, Ven. Mahanama has created an imaginary link between the three elements, Country-Race-Religion and made it into one unit similar to the Holy Trinity, whereby Sri Lanka (Dhamma Deepa), Buddha's chosen people (Sinhalese), and Buddhism (Buddha Sasana) should be protected for 5000 years. This is known as the Jathika chintanaya or the Mahavamsa mindset and one of its outcomes is the unitary state.

Therefore, for the next 2500 years, a Sinhala Buddhist will never allow a federal state in Sri Lanka.

From a very young age, the innocent Sinhala Buddhist children who attend the Daham Paasela (Sunday school) in the Buddhist temples are brainwashed by engraving the Mahavamsa Buddhism and Sinhala Buddhist racism into their sub-conscious minds.

They are taught to believe that the non-Sinhala Buddhists (Tamils) are invaders who do not belong to Sri Lanka. All the Tamils should be chased away to Tamil Nadu just the way their ancient Kings Dutugemunu did. The country (Sri Lanka), Sinhala race and Buddhism should be protected from the Tamils. Now, from recently, they have also included the Christians in those needing to be thrown out. Due to the above conditioning, the Sinhala-Buddhist majority believes that the entire Sri Lanka belongs to them and the minorities are aliens.

We cannot blame the Mahavamsa author Ven. Mahanama, because he had a genuine reason for the above mythology but unfortunately today due to ignorance and lack of rational thinking, the Sinhala Buddhists still believe the Mahavamsa as the gospel truth.

As long as the Sinhalese remain ignorant, as long as they cling on to the 2500 years old mysteries of the past as their guide, as long as they remain engrossed to the Mahavamsa mindset, whatever solution the GOSL brings in, the Sinhala-Buddhists are not going to accept.

As responsible leaders, not only the GOSL but the moderate Sinhala media personnel, educated and intelligent Sinhalese people and moderate religious leaders/Buddhist clergy should educate the Sinhala nation to think rationally and differentiate Buddhism from Sinhala-Buddhism, explaining the reason why the Pali chronicles were written during that period of extreme danger to Buddhism, which is not the case today.