Tibetan monks shield their eyes from the sun as they watch others dancing at the Kirti Monastery near the town of Langmusi, in southwestern China’s Sichuan province. 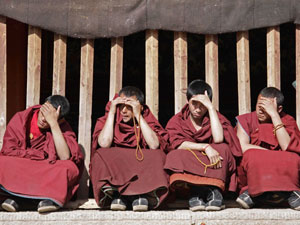 Rights groups and exiles say the officially atheist party tramples on Tibetans’ religious and cultural traditions and seeks to co-opt religious figures for its own ends.

China, which “peacefully liberated” Tibet in 1950, says it guarantees freedom of religion and its rule ended serfdom and brought development to a backward, poverty-stricken region.

Writing in the influential fortnightly party magazine Qiushi, Tibet’s Communist Party boss Chen Quanguo said the more than 1,700 temples and monasteries and 46,000 monks and nuns had to be seen by the government as “friends”.

“Let the monks and nuns in the temples and monasteries have a personal feeling of the party and government’s care and warmth; let them feel the party’s benevolence, listen to the party’s words and follow the party’s path,” Chen wrote in Qiushi, which means “seeking truth”.

He called for temples and monasteries in the region to be outfitted with radios and televisions, as well as newspapers and reading rooms.

“Monks and nuns should not have to go out of their temples or monasteries to understand the party and government’s policies and social progress, or Tibet’s peace, stability and good fortune, so as to be guided to follow a path of revering scientific culture.”

Subscribers received the latest issue of the magazine on Friday.

Chen has struck a similar line before, writing in late 2013 that Chinese officials in Tibet must build an “impenetrable defense” against separatism and befriend monks and nuns, who are generally revered by the devoutly Buddhist Tibetans.

The government has tried, with varying degrees of success, to prevent Tibetans from accessing information about exiled spiritual leader the Dalai Lama and the exiled government on the Internet or via satellite television.

But many Tibetans are still able to get such news, either via illegal satellite television or by skirting Chinese Internet restrictions.

Beijing calls the Nobel Peace Prize laureate a “wolf in sheep’s clothing” who seeks to use violent methods to establish an independent Tibet.

The Dalai Lama, who fled to India after a failed uprising in 1959, says he simply wants genuine autonomy for Tibet, and denies espousing violence.