Lhasa, Tibet (China) -- Tibetans in the Amdo area of Tibet have burned skins of endangered animals worth thousands of yuan in a bid to preserve wildlife, following strong statements by the Dalai Lama about the importance of wildlife conservation and compassion towards animals to a gathering of thousands of Tibetans in India last month. 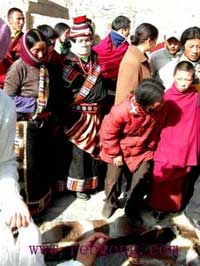 << On February 7, a group of Tibetans from Rebgong in the eastern Tibetan area of Amdo (Qinghai) burned pelts of otter, leopard, tiger and fox, and Radio Free Asia reported today that a man burnt his wildlife skin chuba (Tibetan robe) in Lhasa on February 2.

According to the Wildlife Protection Society of India, in the past few weeks in Lithang (Chinese: Litang), Sichuan province (the Tibetan area of Kham), Tibetans did not wear animal skins at several local festivals, and prices for wildlife skins have apparently since dropped in the area. The burning of the skins follows statements made by the Dalai Lama at the Kalachakra ceremony in south India last month, emphasizing environmental and wildlife protection and calling upon Tibetans from Tibet not to wear illegal animal furs and skins.

This new trend follows increasing concern among environmentalists against the illegal wildlife trade between India and Tibet and the lack of enforcement from the authorities in preventing wild animal pelts being sold in Tibetan areas.

Reports from Tibet indicate that Tseten Gyal, a Tibetan reportedly involved in the initiatives in Rebgong, Malho (Chinese: Huangnan) Tibetan Autonomous Prefecture, has been questioned by security personnel in the area. Tibetans taking part in the burning of skins have apparently argued that not only is the wearing of skins and furs against Buddhism, but it is also detrimental to the Tibetan economy, because of the high prices Tibetans pay to traders for the illegal skins. The Tibetans in Rebgong are reportedly planning a mass burning of wild animal skins in a few days time. China, which participates in the Convention on International Trade in Endangered Species of Wild Fauna and Flora (CITES), has spoken publicly about its concern regarding the extent of the illegal wildlife trade.

Images published on a Chinese-language website, http://www.rebgong.com/news/view.asp?id=372, depict animal skins being prepared for burning and Tibetans donating money to show their support. According to the website, the money will be used for holding prayers for the animals who were killed.

The actions in Tibet follow concern expressed by the Dalai Lama and Tibetan and Indian environmentalists about the illegal wildlife trade. A hard-hitting report released in August 2005 by the Environmental Investigation Agency (EIA) and the Wildlife Protection Society of India (WPSI), concluded that the new and burgeoning markets for Indian tiger, leopard and otter skins are in Tibetan areas of the PRC in Sichuan, Qinghai and Gansu, where they are coveted adornments for Tibetan chubas.

Environmentalists have showed that it is the trade in animal skins that is driving the poaching of tigers, leopards and other big cats in India, as well as the demand for tiger bones and other body parts valued in traditional Chinese medicine. "So great is the demand that the killings in India, and the illegal trade, are now spiraling out of control," said Belinda Wright of the Wildlife Protection Society of India, who led a research trip to Tibet to investigate the trade. "To our great distress, [in Tibet] we found tiger and leopard skins practically everywhere we went, and the dealers repeatedly and categorically told us that the skins had come from India." (Biblio, India: November-December 2005).

In recent years the Dalai Lama has frequently spoken about the importance of wildlife conservation and in April last year launched a campaign by Care for the Wild International and the Wildlife Trust of India to combat the illegal wildlife trade along Tibet's border with India and Nepal. But he gave a particularly strong message direct to Tibetans from Tibet during the Kalachakra religious ceremony at Amaravati, Andhra Pradesh, in January. On the final day of the empowerment, he told Tibetans from Tibet and exile communities: ‘When you go back to your respective places, remember what I had said earlier and never use, sell, or buy wild animals, their products or derivatives." The Dalai Lama said he was "ashamed" to see images of Tibetans decorating themselves with skins and furs.

At the Kalachakra, Tibetans held awareness-raising activities about the illegal wildlife trade. They showed a film produced by the Environmental Investigation Agency and the Wildlife Protection Society of India with the support of Global Tiger Patrol, containing footage obtained during the WPSI investigation of the trade across the Tibetan plateau. The coalition of activists, including the Tibetan-run Tesi Environmental Awareness Movement, displayed stark images tracing the story of the tiger from the jungles of India, to death at the hands of the poachers to the use of its skin as a fashionable ornament for Tibetan costumes.

Tibetan animal welfare activists, who were commended by the Dalai Lama during the Kalachakra, reinforced the Dalai Lama's message of compassion to animals by speaking to Tibetans from Tibet about the illegal trade. One Tibetan activist for the Tibetan NGO Tesi Environmental Awareness Movement said: "Many Tibetans were so moved by the Dalai Lama's statements and by the information that we gave them, that they said they would burn their animal skins when they returned to Tibet from the Kalachakra."

China has expressed its concern on the illegal wildlife trade, and in August 2005 participated in the first Convention on International Trade in Endangered Species of Wild Fauna and Flora (CITES) Implementation and Enforcement seminar held in a central Asian country. The Chinese news agency Xinhua quotes John M Sellar, a senior CITES enforcement official, as saying: "I had never thought that China is becoming so active in communicating with CITES and so open to any problems raised" (Xinhua, August 26 2005).

The Xinhua report stated: "By now, China has participated in almost all global multilateral environmental agreements. The country has also promulgated the forestry law, the Law on Protection of Wild Animals and the Regulations on the Protection of Wild Plants, laying a firm legal foundation for the management and conservation of wild fauna and flora." Zhang Li, the chief representative of the International Fund for Animal Welfare in China, was quoted as saying: "Since China is becoming a major consumer of some wild species, like its neighboring countries, these countries' joint efforts in controlling wildlife smuggling and enforcing related laws of their own will greatly affect the endangered species' fates."

Despite China's participation in international conventions including CITES, environmentalists have expressed increasing concern at the Chinese authorities' lack of enforcement over poaching and selling of endangering animal pelts in Tibetan areas.