Bangkok, Thailand -- If you think any Thai can pay respects to the late revered monarch, you will be in for an unpleasant surprise. 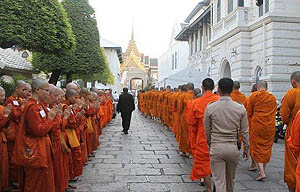 << A row of female monks (left), after being barred from paying respect to the late monarch, paid respect to the monks who are escorted into the Grand Palace to attend the royal ceremony. (Photo Courtesy Songdammakalyani Monastery)

In December last year, a group of bhikkhuni or female Buddhist monks from a monastery in Nakhon Pathom were blocked from paying respects to the late King. The bhikkhuni are illegal in the eyes of Thai law and were reprimanded for wearing the saffron robes of Theravada Buddhist monks.

Earlier in November, another group of bhikkhuni from Songkhla were also denied entrance to the royal funeral ceremony at the Grand Palace. They were similarly told that female monks are illegal and should they want to be allowed to pay respects to the late King, they should join the lay people's queues and wear black outfits instead of their monastic robes.

If this is not blatant religious and gender discrimination then what is?
"We were shocked and humiliated," recalled Dhammananda Bhikkhuni, who led a group of 70 female monks and novices to attend the royal funeral rites.

"We'd already received confirmation from the palace office that our turn to pay respects to the late monarch was set for 3.30pm. So we didn't expect this to happen at all," said the country's first and most senior bhikkhuni.

The National Office of Buddhism and Mahachulalongkornrajavidyalaya, a Buddhist university, are in charge of screening monastics at the Grand Palace. The person in charge of the screening is Asst Prof Teerapak Chaichana, a teacher at the monks' university.

"He said: 'Don't you know you're illegal?' He reprimanded us with contempt," recalled Dhammananda Bhikkhuni. "He also told us he just couldn't accept women wearing saffron robes."

"We explained to him that as Theravada bhikkhuni ordained in Sri Lanka, we are not part of the Thai clergy. So the rules prohibiting female ordination by the Thai clergy do not apply to us. Besides, we have already received the palace's permission to come. But he refused to listen," she said.

According to Mr Teerapak, it's not only female monks who are barred from paying respects to the late revered monarch at the Grand Palace. The monastics who are ostracised by the Ecclesiastic Council (read: the Santi Asoke sect) cannot do so either because they do not have the required certifications from the clergy. This rule applies to Thai nationals only, he said. Foreign monks and bhikkhuni with passports can attend the ceremony.
As for the white-robed nuns, they must pay respects through the lay people's channel. "Their ID cards still say they are Ms or Mrs, meaning they are lay women. To get in, they need certification that they are monastics from the clergy, but they don't have it.
"All this is a matter of rules and regulations, not discrimination," he insisted.

Mr Teerapak's explanation raises many questions. Isn't it discrimination from the clergy that deprives female monastics and white-robed nuns of legal status in the first place? The Council of State, the government's legal arm, has declared that white-robed nuns are monastics. Why does the clergy still refuse to recognise nuns as such?

And why are the nuns allowed to pay respect to the late revered monarch in their white robes in lay Buddhists' queues, while the bhikkhuni are told to discard their saffron robes first? Isn't discrimination the real issue here?

Strict screening is a matter of caution, said Mr Teerapak. "If we allow those barred by the clergy to enter, they might use it to back their claims to legitimise their status," he said.

Unless the group comes up with a letter of confirmation from the palace office, the clergy's rules prevail, he added. The Dhammananda group only had verbal confirmation.

While the white-robed nuns quietly accept the discrimination, Dhammananda Bhikkhuni is planning to sue the screening official for violating their religious and gender rights and for subjecting her group of bhikkhuni to public humiliation with his discrimination and false allegations.

Although the complaint is against an individual official, the discrimination and contempt which female monks face is systematic.

The clergy insists its opposition is out of monastic principle. The Buddha demanded double ordination for female monks, it stresses; female monks must be ordained by the bhikkhuni order first, then by the male preceptor.

Since the bhikkhuni order under the orthodox Theravada sect subscribed to by Thailand has long been extinct, reviving female ordination is subsequently against the Vinaya, or the monastic code of conduct.

But is this technical obstacle a camouflage for misogyny, an excuse for the patriarchal clergy to protect its power turf? The monks' "how dare you act and dress like us" scolding of bhikkhuni sounds like it.

Talking about the monastic code of conduct, the Buddha prohibits monks from touching money, telling them to stick to simplicity. Why are elders and countless monks living in luxury and why is the clergy ridden with corruption?

The Buddha set rules for the clergy to operate transparently and democratically. Why is the Thai Buddhist clergy deeply feudal and authoritarian?

The Buddha told monks to treat bhikkhuni kindly and helpfully as their "sisters". Why is the clergy full of hate for female monks?
When Dhammananda was ordained in Sri Lanka in 2001, she was fiercely attacked by the clergy for opening the floodgates of female ordination in Thailand -- and for her outspokenness.

A scholar in Buddhism before her ordination, Dhammananda fearlessly counters the clergy's claim that the bhikkhuni lineage is extinct. Historical evidence shows the bhikkhuni clergy in China actually originated from the Theravada sect, so the lineage still exists, she pointed out.

"The role of the bhikkhuni order in female ordination is only to screen the candidates," she said.

"Since the screening involves some sexuality questions, it posed an awkward situation for monks and the bhikkhuni candidates back in those days. The Buddha then assigned the bhikkhuni to do the screening. But the ordination must still be done by monks," she added.

This means that if the screening is no longer a problem, monks can perform female ordinations without breaking the monastic code of conduct.

Her explanation is in line with the views of many scholars of Buddhism around the world. But don't expect the patriarchal clergy to listen.

Despite the elders' frowns, the number of female monks and novices keeps growing. Deep panic hit the clergy in 2014 when full female ordination eventually took place right here in Thailand, in Songkhla, with the preceptor from Sri Lanka. It was also the same year that Ven Dhammananda -- after 12 years in the bhikkhunihood -- was able to become a preceptor herself.

In an angry response, the Supreme Sangha Council urgently re-issued a ban against bhikkhuni. In addition, it asked the Foreign Ministry not to give visas to Sri Lankan monks who are coming to Thailand to help ordain women here.

The ban and the no-visa request violate basic human rights and religious freedom. Besides, the clergy should never have any mandate over secular policies. Sadly, state authorities under the same patriarchal mindset obediently complied.

Blocking female monks from paying respects to the revered monarch is just the latest un-Buddhist act from the self-proclaimed guardians of Buddhism. Is there any hope that the judiciary, also deeply entrenched in patriarchy, can address the bhikkhuni cause?

Ven Dhammananda is undaunted. Despite resistance from the male-dominated clergy and its helpers in officialdom, the public generally welcome female monks, she said.

"Actually, we have received support from many broad-minded monks. Change is taking place in favour of female ordination, not only in Thailand but elsewhere in the world.

"Whatever challenges lie ahead, we will still practise as bhikkhuni. Whatever resistance from the establishment, more women will choose to pursue a spiritual path as female monastics," said Ven Dhammananda.