Hanoi, Vietnam -- The head of a banned Buddhist church in Vietnam on Thursday expressed gratitude to the international community for advocating for his release from house arrest and reaffirmed his commitment to democracy activism in the one party communist nation 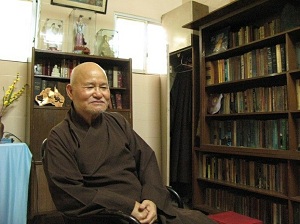 << A file photo of Thich Quang Do, patriarch of the Unified Buddhist Church of Vietnam, at the Thanh Minh Zen Monastery in Ho Chi Minh City.
AFP

Thich Quang Do, the 87-year-old leader of the Unified Buddhist Church of Vietnam (UBCV), said he was honored by recent calls for U.S. President Barack Obama to push for his freedom when he meets with Vietnamese leaders on the sidelines of two regional meetings in the Philippines and Malaysia this week.

“I would like [to] send my deep gratitude to all the Nobel peace laureates and scholars who have paid great attention [to my situation],” Do told RFA’s Vietnamese Service in an interview from the Thanh Minh Zen Monastery in Ho Chi Minh City, where he has been under effective house arrest since 2003.

“It is for the UBCV, which has been under [government] oppression, and myself that they raise their voices and advocate for [us] … as we demand freedom from the government, not only for our church, but for all the people of Vietnam.”

Do said that since the UBCV’s late patriarch Thich Huyen Quang’s death in 2008, he had taken up the call for Vietnam’s communist government to “transition from authoritarianism to democracy,” and would carry on with his mission, despite his continued house arrest.

“Only then will our church and I be able to cooperate with the government,” he said.

“That is our church’s policy. As long as they maintain authoritarianism, we will continue our demand until nobody is left ... we want to see the Vietnamese people have democracy and freedom like the Americans and other citizens of the democratic world.”

Do’s vow to continue his fight for democracy followed an open letter published Tuesday by the Paris-based Vietnam Committee on Human Rights (VCHR) and several other rights organizations calling on Obama to press Vietnam’s government for the Buddhist leader’s release.

Obama is scheduled to meet with Vietnamese leaders on the side of the Asia Pacific Economic Cooperation Summit and the U.S.-ASEAN and East Asia Summits in the Philippines and Malaysia this week.

The 90 signatories to the letter included Nobel Peace Prize laureates, religious figures, academics, journalists, legislators, and human rights defenders and democracy activists from around the world.

In an accompanying statement, VCHR noted that in Vietnam, religious leaders, activists and bloggers face harassment for peacefully expressing their views and lack a legal framework to protect them, at the same time the country seeks to strengthen economic and security ties with the U.S.

It said the signatories stressed that U.S.-Vietnam relations are only sustainable if they are “founded on the mutual respect of democratic freedoms and fundamental human rights,” including the freedoms of expression, association, religion or belief and movement.

The release of Thich Quang Do would be a “truly historic gesture” that would “give Vietnam the opportunity to demonstrate its willingness for progress, and reaffirm the United States’ determination to make human rights the cornerstone of this strengthened relationship,” they said.

Carl Gershman, president of the Washington-based National Endowment for Democracy (NED) and a signatory to the letter, told RFA Thursday that as “a great voice for religious liberty,” Do “stands for something not just for Vietnam, but for the whole world, and it's very important that we stand with him.”

He praised Do’s work on behalf of democracy, human rights and freedom of religions, adding that it is “absolutely urgent that the president use his visit to Asia to try to seek his release.”

“[This letter] helps put pressure on the [Vietnamese] government—if they want to be respected in the world, they cannot imprison people like Thich Quang Do—and it also gives hope to someone like him,” Gershman said.

“You cannot either develop economically or have a good relationship with democratic countries if you imprison people like Thich Quang Do—it's simply inconsistent with those objectives. So if they want to continue along these lines, I think they should not only release him, but they're also going to have to open up politically.”

Thich Quang Do, a 16-time Nobel Peace Prize nominee, has spent more than three decades in detention for his peaceful advocacy work.

He was sent into internal exile in northern Vietnam for 10 years in 1982 for protesting the creation of a state-sponsored Buddhist Church and in 1995 was sentenced to five years in prison for organizing a rescue mission for flood victims in the Mekong Delta.

Released in 1998 due to international pressure, Do was later placed under house arrest at the Thanh Minh Zen Monastery, where his communications are monitored and he is denied freedom of movement.

The State Department included Vietnam on its list of Countries of Particular Concern (CPC) in 2004 but removed it from the blacklist two years later amid improving diplomatic relations, and has since ignored repeated calls from the commission to reinstate the country’s designation.