The Wheel And The Crescent

Singapore -- Buddhism and Islam are two religions we do not hear mentioned in one breath very often. So it was with great anticipation that I went to attend the conference, Buddhism & Islam – Encounters, Histories, Dialogue and Representation held at McGill University, May 29 and 30, 2009. The conference indeed turned out to be eye-opening. 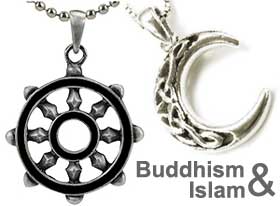 Not many know that the encounters and relationship between the two religions commenced almost at the very beginning of Islamic history. The first panellist, Xinru Liu, opened the conference with her research on Tukharistan (northern Afghanistan), Sogdiana (southern Uzbekistan) from 6th to 8th century, which was the junction on the Silk Route for routes going east and west and north and south. This region was Buddhist an[]d Zoroastrian before the Muslims came in as invaders and traders. There was not a sudden conversion because of the fear of the Muslim armies as is generally believed, but close collaboration and cooperation in the region.

The people there greatly appreciated the opportunities that came with joining the Islamic culture and civilization. For some, it was also convenient to be Muslim under the Muslim regime and pay no taxes, since in Umayyad times Muslims did not need to pay taxes. However, once Muslim, they continued to be so and the region produced many philosophers,
scientists and mathematicians who took Islamic civilization to new heights, while as Liu argues, also preserving their pre-Islamic local cultural traditions.

Equally interesting in this panel was Alexandre Papas’ paper in which he discussed the writings of two Ottoman travellers to China in the early twentieth century. The dialogue between the Muslim authors and Buddhist monks was discussed. It was interesting to see that they discussed the similarities and dissimilarities between the two religions as well as political issues with both their countries facing Western domination.

However, the highlight of the day was Georgios Halkias’ paper on
Muslim Queens of Buddhist Kingdoms, which was about the practice of bride exchange in Ladakh and Baltistan. According to Halkias, “the Muslim Queens of the Himalayas stand witness to a rich cultural fusion, an old blend of Arab, Persian, Mongol, Indian and Tibetan elements. Ever since the conversion of the Baltis to Islam in the 14th century, the Muslim princess-brides stood as promises of unity and peace and as a means of alleviating conflict between the warring houses of Baltistan and the Buddhist
kingdoms of Ladakh.”

Interestingly, these Muslim queens ruled the Buddhist kingdoms as well, longest rule having been of 13 years, and were patrons of both Buddhist monasteries and mosques. Muslim and Buddhist interactions in Tibet discussed by José Ignacio Cabezón, was also quite absorbing. According to him, “Muslims­both Muslims of Kashmiri origin and ethnic Chinese Muslims­have lived among Tibetans for centuries.” However, he argues that the “Chinese annexation of the Tibetan plateau has exacerbated the tensions between these two groups.”

The two papers presented on Buddhism in Muslim Indonesia by Karel Steenbrink and Hudaya Kandahjaya were complementary and explained a unique situation really well. Buddhism and Islam have lived together in the region since the arrival of Islam in 1200, Buddhism these days being mainly represented by the Chinese community. Indonesia, in spite of having the largest Muslim population in the world, does not call itself an Islamic state. Six religions are recognized by the state of Indonesia.

However, people of all religious communities have to accept the Pancasila ideology, one of its principles being, “belief in the one and high divinity.” This leads to the development of a unique situation for the Buddhists, since in their belief, the presence or absence of God is left undefined. Some Buddhists in compliance with Pancashila and also because of Muslim influence are using the concept of Adi Buddha, a form of divinity. This is seen as problematic by others who perceive it as forming a
new kind of theistic Buddhism.

The two papers on Thailand brought about two contrasting pictures of the region. Charles Keyes of University of Washington gave more of a historical perspective telling us that by the beginning of twentieth century, Muslims were a distinct minority in Thailand, they came from South Asia, China, Malaysia and some were also ethnic Thais. However, with the restructuring of the state in the late 19th century and growth of nationalist feelings, promotion of Buddhism became fundamental to Thailand. The result of this being that the Muslims then became the “others” or what is called khaek in Thailand.

This rhetoric of difference has led to “some Muslims, especially Malay-speaking Muslims, have embraced fundamentalist versions of Islam and some Thai politicians and Buddhist leaders have accentuated Buddhist nationalism.” On the other hand, Alexander Horstmann’s paper focused on the small village of Ban Tamot in Southern Thailand, where the Muslims are mainly concentrated. He talked about an ancestor-worshipping ritual held in the cemetery, in which local Imams as well as Buddhist monks participate. Very interestingly, “the basis of this ritual is the mutual bond of kinship relations that criss-cross through the religious communities and the local elites. Thus, the Imam of Ban Klong Nui is related to the old Buddhist abbot of Wat Tamot. Second, the village spirit is believed to be of Malay-Muslim origin ... Thus, while not explicitly announced, the participation of Muslims is crucial to the ritual.”

An interesting project on Islam in Tibet has just been finished by the Warburg Institute of the University of London. Two of the papers presented on Rashid al-Din’s (1247-1318) Life of the Buddha were part of the project. Rashid al-Din’s book is considered the oldest World History book, in which he dedicates a separate section on the life of the Buddha. Ronit Yoeli-Tlalim highlighted the aspects from Tibetan Buddhism that are present in the work and also attempted to give evidence of the presence of Buddhists in the Ilkhanid court.

Commenting on the same text, Anna Akasoy brought out the use of Islamic terminology by Muslims in trying to understand Buddhist concepts. This is what the two scholars called a 'cultural translation', where Buddhists concepts were Islamicized in order to be understood.

The conference ended with another interesting panel on Religion and Local/Global Identities, where an effort was made to understand how one community perceives another in various places, Japan, India, Thailand and Malaysia.

And how contemporary scenarios like the 9/11 affect relations, although needless to say, do not alter them completely. This conference gave a much needed comparative religious perspective. More such efforts are needed to bring out the fact that most religious people when left to themselves are able to live together in a collaborative and cooperative way, enriching all the cultures and religions involved.

This “cultural translation” is an ongoing process, in spite of the hoopla surrounding fundamentalisms of all sorts today. (The picture shows the mosque in Lhasa).