FOXBOROUGH, MA (USA) -- After a drizzly and overcast morning, the sun broke through the clouds over Gillette Stadium yesterday moments before the Dalai Lama stepped onto the turf, as if on cue. 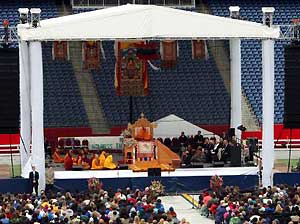 People rose from their seats, greeting the 73-year-old spiritual and political leader with a mix of reverent silence and cheers. "You rock, Lama!" someone shouted, the call rising from a corner of the stands.

Waving cheerfully, the Dalai Lama mounted a stage and settled into an armchair facing a troupe of young dancers. With a flourish, he produced something cherry red - a Patriots hat, projected onto the end-zone video scoreboards - and waved it in the air. Thousands cheered as he tugged the cap onto his famously shaved head.

The Dalai Lama's afternoon address was about the path to peace and happiness; in the morning, he gave a lesson about the teachings of Buddha and The Four Noble Truths. To each lesson, the reaction from the crowd was the same: sustained silence. Serenity, even.

"You know what the strange thing is? You've been to Gillette Stadium before? It's quiet in there," said Kim Hubert, 42, a nurse from Marshfield, as she made her way through the crowded concourse, where people waited in long but patient queues for concessions and restrooms. "It's surreal. Even the kids in there are quiet."

The crowd of 15,935 ticket-holders was diverse - Buddhist and non-Buddhist, young and old, clad in hemp and Oxford cloth, sweaters and sandals, flowing robes and fleece. But many cited the same reason for coming: the chance to be close to, and learn from, a singular figure.

"It's an honor and a privilege to be at the same place as the Dalai Lama," said Steve Walters, 53, a service engineer from Marlborough who identified himself as a "novice" Buddhist, after 12 years of study and practice.

His wife, Dayna, said she came to learn more about something her husband finds meaningful. Plus, "I don't know when I'd ever have a chance to do it again," she said. "I can't imagine he comes to Foxborough very often."

This was, in fact, the Dalai Lama's first trip to the stadium but sixth to the Boston area. Robert Kraft, who sat near the front, allowed the use of Gillette rent-free for the event, which raised an estimated $440,000 for construction of a Tibetan heritage center in Boston.

The Dalai Lama, who has led an exiled government in India for 50 years, spoke earlier in the week at Harvard and at the Massachusetts Institute of Technology, which dedicated a new ethics center named for him.

Displaying his trademark mix of gravity and whimsy, the Dalai Lama punctuated his talk on religion with self-deprecating humor. "When I previously come here my body as a human body complete," he said, chuckling as he noted the creakiness of age. "Last year gall bladder create some problems so finally is removed."

In the morning, he spoke from an elaborate throne - crafted by members of Boston's Tibetan community - on a stage that held seated dignitaries on one side and kneeling monks on the other. He alternated between English and Tibetan for the religious lesson, speaking through his regular translator, Thupten Jinpa.

In the afternoon, the Dalai Lama stuck with English for his secular address and an ensuing session in which he answered previously submitted questions.

He was playful and animated across the hours, drawing circles in the air with his hands. When a cold wind whipped through the stadium bowl in the morning, he pulled his saffron and maroon robes tight over his exposed right arm and head and encouraged the crowd to bundle up as well. In the afternoon, he wore sunglasses but mostly declined offers of an umbrella to protect him from the sun.

In far-ranging remarks, he touched on the environmental benefits of small cars, the campaign to win freedom from China - calling supporters not "pro-Tibetan" but "pro-justice" - and the importance of valuing all faiths in the "supermarket of religion."

"For example I am Buddhist. I studied Buddhism, I practiced Buddhism, and through practice I got some sort of little experience . . . Very low but still better than zero," he said. "Buddhism is best for my case. That doesn't mean Buddhism is best religion to everyone, certainly not."

During the extended intermission, a pair of Rhode Island retirees with field tickets said that comment spoke to them in particular.

"It's a wonderful thing to say. So many other religions say, 'I'm the one,' " said Ada Mogayzel, a former librarian from Providence, calling the Dalai Lama "an inspiration."

Up on the concourse, with clouds still cloaking the stadium, Tibet native Ngawang Norbu of Malden called it a "very auspicious day."

"Just the presence of his holiness is a blessing," said Norbu, 58, wearing a wool cloak his grandmother knit before the family left Tibet 50 years ago. "Even when it's bad weather, it just clears up."

By the end of halftime, it had.
TOP