Getting to know the Dalai Lama 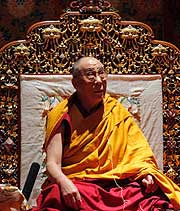 “I am just a simple Buddhist monk — no more, nor less,” he has said.

But likening the Dalai Lama to “a simple Buddhist monk” is akin to saying the Pope is just another priest.

The Dalai Lama is the political and spiritual leader of Tibet-in-exile, in Dharamsala, India — and a pop-culture icon whose cause is championed by U.S. celebrities such as Richard Gere.

Tenzin Gyatso (the name he assumed after he was installed as Tibet’s spiritual leader in 1940), has written best-selling books, and even appeared in an advertisement for Apple. This year marks the 50th year the Dalai Lama has lived in exile.

Many of us would recognize him on the street, and yet we know little about him.

“For the most part within American pop culture he stands for a symbol of this holy man above regular human existence, this extremely peaceful character,” said Bob Thompson, the founding director of the Bleier Center for Television and Popular Culture at Syracuse University. But, he said, most people would fail a pop quiz if you asked anything about the Dala Lama or his theology.

With that in mind, here’s a primer on the Dalai Lama.

His Holiness is considered to be reincarnations of each of the previous 13 Dalai Lamas (the first was born in 1351), who are regarded as manifestations of Avalokiteshvara (his Indian name), or Chenrezig, the Bodhisattva of Compassion.

HOW WAS HE IDENTIFIED?

It is said to have begun when the embalmed head of the 13th Dalai Lama, turned and pointed toward northeastern Tibet, foretelling the direction to search for the next Dalai Lama. A vision led the search party to the home of a peasant family in Taktser.
Without revealing their purpose, they conducted a few tests and they determined they had found the 14th Dalai Lama.

WHAT DOES HE TEACH?

Compassion and Buddhism. Buddhism, unlike other major religions, isn’t God-based. Buddhism focuses on training the mind and spirit, and meditation is an integral part of that training. One can practice Buddhism and belong to another faith.

In November 1950, one month after 80,000 Chinese soldiers invaded Tibet, 15-year-old Tenzin Gyatso assumed leadership of his country. From 1949-51, China “annexed Tibet after splitting it into 12 parts, destroyed its religion and culture, plundered its accumulated wealth, ravaged its natural resources, and killed or enslaved its population,” writes Columbia University professor Robert Thurman in his book Why the Dalai Lama Matters.

WHAT IS THE CHINA-TIBET CONFLICT ABOUT?

China’s official position is that it liberated Tibet from its feudal state, that it has never had independence and that the Dalai Lama monopolized power as its ruler. The Dalai Lama has accused China of committing cultural genocide.

Robert Barnett, also at Columbia, doesn’t consider China guilty of this. China is “doing terrible things to the religion and they are mangling the culture,” Barnett said, but he likens China’s efforts to modernize Tibet and invest billions of dollars there to England’s efforts to colonize India.

The Dalai Lama has championed a nonviolent approach to resolving Tibet’s conflict with China, and for his efforts in this quest, he was awarded the 1989 Nobel Peace Prize.  And he advocates autonomy for Tibet, but not secession from China.

HOW FREQUENTLY DOES HE VISIT THE U.S.?

In 1979, the Dalai Lama first visited the United States, where the demand for his appearances is great — and it’s not just Buddhists who desire to see him.

Some of his appearances are lucrative fundraising and political-capital opportunities in the West, Dalton said. (The Dalai Lama donates proceeds from speaking appearances to charity.)

“The support for him is very generous in the United States,” Dalton said. “And he needs the large amounts of money to run the Dharamsala campaign, but also to continue his efforts in Tibet. The political influence is enormous.”