Taking it to the streets: Urban Dharma brings Buddhist teachings to the heart of Asheville

Asheville, North Carolina (USA) -- Take one look at the “spirituality” section of our calendar, and it’s easy to see that the Asheville area aims for wellness of mind and heart in a variety of ways — meditation, mindfulness, earth medicine, prayer, peacefulness, the metaphysical and Zen listings abound. One of those gems is Urban Dharma, where Hun Lye welcomes those seeking to practice and learn more about Buddhism. (Pictured: Hun Lye; photo by Taylor Johnson) 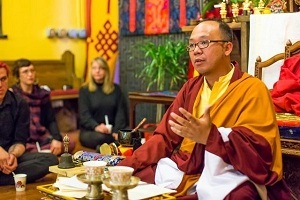 Lye practices the Drikung Kagyü tradition of Tibetan Buddhism, but says of his downtown-Asheville center, “When people come in and say ‘I’m looking for a Buddhist group,’ we don’t want to assume that this is where they belong; I want them to see all of the groups, what they are doing, where they are meeting — and find what works for them.”

He adds that Asheville is “much more yoga” in many ways, while Buddhism is “a different mode of spirituality that is kind of quiet rather than ecstatic.” So he aimed to “start a place that would be a resource for anyone who is interested.”

Last month, Lye received a new title — Dorjé Lopon — which made him the first non-monastic teacher in the West to receive the honor. Born in 1970, he grew up in Penang, Malaysia; studied under Buddhist teachers of many traditions; and earned his doctorate in Buddhist Studies from the University of Virginia. He also taught Buddhist studies at both Warren Wilson College and Davidson.

Soon after being named Dorjé Lopon, he spoke with Xpress.

Mountain Xpress: When did you first conceive of the idea for Urban Dharma? And how did you choose Asheville for the location?

Hun Lye: Somewhere around 2010, conversations started among a group of people that I had known for a while, many from … Warren Wilson. Ironically, from 2003 to 2008, I was not convinced that a Buddhist center would work in Asheville. I knew there were many groups around, and I did not think we needed another [one]. It was when we began to talk more seriously that I said, “There might be a need that is not being met yet, and that need is for a clear Buddhist presence in downtown, serving as a clearly dedicated Buddhist place.” …

I joke about how you can’t really go into any retail downtown, without seeing some sort of of Buddhist “thing” in there, even if the shop has nothing to do with anything Buddhist. So there is that pervasive sense and feeling of being open and interested in Buddhism or at least [its] material culture. [But] there is not a lot of excitement in Buddhist programs. It was one of the reasons that I had to think really hard about, Is there a need here?

[But] since we’ve opened, I’ve seen that there are a good number of people from all age groups coming to our events, from the very young to the very old, and that is encouraging.

What does being appointed Dorje Lopon mean within the Drikung Kagyu tradition?
The most common use of this title is actually in a ritual context in Tibetan Buddhism. [The Dorjé Lopon] is not the person that is doing the most things during the ritual; it is another person, who is just quietly sitting there, but at the same time is the center of attention, because it is believed that this person is doing the inner work necessary to ground everything.

So when the head of the Drikung Kagyu decided to use this title and to give it to specific individuals, it was a way of acknowledging that [this other spiritual leader] can play that role. Because I’m not part of the monastic system, and more conventional titles that are necessarily monastic cannot be given, he … applied it as a daily-use title. So it’s an innovation of sorts, [and] in this case, the title signifies that the person who holds it can pass on the transmissions and the traditions of the lineage.

How do you think Urban Dharma and what you stand for compares to other Buddhist centers in the area?

We are trying to appeal to a broader context. I joke about this, but every time people say, “I’m Buddhist,” the follow-up question from others would be, “Do you meditate?” and I’m like, “You know what? The majority of Buddhists don’t meditate. American Buddhists, maybe, but there’s more than one way to be Buddhist, and Urban Dharma is trying to communicate that.

We’re trying to create a community part that’s accessible to people, so that people don’t feel like in order to be a “real Buddhist,” “I need to spend x number of hours a day meditating; I need to spend x number of months a year attending retreats; I need to go into the mountains — all of that. There is a place for that and there [are] definitely traditions like that … but again, it’s about what is needed here. And I feel that what’s needed here is a way of being Buddhist … downtown.

You don’t have to go into the mountains to be sane. The name [Urban Dharma] is communicating, I think, an attitude, a state of mind, a way of understanding that spiritual practice is not only available and possible in the mountains. It’s in the midst of all of this.

Here, we encourage young families to bring their kids, and from my experience at other places in the past, we would have people who attend the program get very annoyed and say, “I came here to get some peace of mind, and these kids!” — which is an understandable reaction if they conceive of a Buddhist center as a form of spa. And that’s a particular conception of what the Buddhist community is, and I find it troublesome. Here, we have to remind everyone that you have to mind your own mind. You can’t say, “These are distractions.” We have to integrate this.

Urban Dharma’s motto is “Changing Minds, Transforming Cities,” and in one of your talks, you mentioned that practices such as prayer, meditation or special diets don’t cause transformation. How does transformation play into Urban Dharma’s mission and what place should practices such as prayer or meditation have in people’s lives?
[Those] are devices and methods that help us to change our minds. The real work and the real measure of how well we are doing as Buddhists should not be measured by how many hours in a day I’m spending on a cushion being quiet, but rather how much has the mind/heart changed? Is it still very quickly falling into habits of misery? Or is it becoming easier to notice when you are going down that particular circuit, and when you notice, to break it and move in the other direction?

When minds start to change, then we can begin to think about transforming our families and our communities. Any real change will have to come from changing the mind first. Otherwise, other activities become another way for us to act out our insanity. Even a meditation program can become a way to act out the insanity.

What does your new title and position mean to you and for Urban Dharma?

The recognition of a title is just the beginning of the hard work — if you do it right. I am taking very seriously the head of the lineage giving me this title, but at the same time, I am trying my best not to take myself seriously!

What does it mean for Urban Dharma? I hope, now that this is my main focus, it would say to someone who is interested that I’m not just doing this on my own, but that I am connected to a lineage and that the lineage has very publicly acknowledged that I can transmit and teach this lineage. What I say either makes sense or not. If it makes sense and helps you see and understand [Buddhist teachings] better, then come. It doesn’t matter what title I have. I happen to by playing the role of the leader in this community, but the sooner I make myself obsolete, then the sooner we have reached our goal.

Urban Dharma is located at 29 Page Ave. in Asheville. All programs and events are offered on a donation basis. The nonprofit is also supported by 100 percent of the profits from sister company Tibetan Spirit, an online Tibetan Buddhist store. 225-6422, www.urbandharmanc.com.