HIGH VIEW, W.Va. (USA) -- Deep in the woods of West Virginia, a small, Buddhist monastery uses the calm of nature to meditate. To the Bhavana Society, a monastery in High View, roughly 6 miles from Gore, the forest is an integral part of their religion. 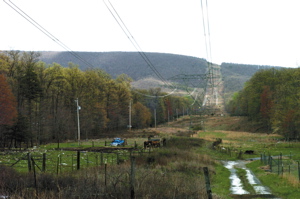 <<  This electric transmission line crossing Great North Mountain cuts through the forest a quarter-mile from the retreat. Alan Lehman/Daily

"The forest is considered like our temple," said Bhante Rahula, a monk and vice abbot at the monastery. "In being with nature ... it can have an effect on the mind. We tune our mind to the natural vibrations in the forest."

Yet the society fears that natural atmosphere will be shattered if a controversial high-voltage power line is built near the monastery. Rahula said the proposed line could impact the delicate meditation process and deter potential guests.

The Bhavana Society is just one group opposed to the proposed line, which would also go through portions of the Northern Shenandoah Valley.

Dominion Virginia Power and Allegheny Power are among the utilities looking to build the 240-mile, 500-kilovolt power line. Once built, it would take power generated in the Midwest to Northern Virginia.

A 65-mile stretch of the line would go from a Frederick County substation to a Loudoun County facility. It would go through parts of Warren, Fauquier, Rappahannock, Prince William and Culpeper counties.

The West Virginia segment would stretch for 114 miles and go through parts of Monongalia, Preston, Tucker, Grant, Hardy and Hampshire counties.

The utilities say the line is needed to address future energy shortages in Northern Virginia, which could suffer rolling blackouts by 2011 if it isn't built.

Opponents counter that the line isn't needed at all, and would unnecessarily scar the landscape.

Regulatory agencies in both states are still considering whether to approve their respective line segments.

The Bhavana Society argues that if the line is built, it would drastically affect the monastery's livelihood.

The monastery houses five monks, two nuns and three lay persons, and welcomes anyone who wishes to stay and meditate for periods of time. "We get people that come here from all over the world," Rahula said.

The monastery provides food and boarding for the guests, and relies on donations to survive. It has spent roughly $15,000 fighting the power line. 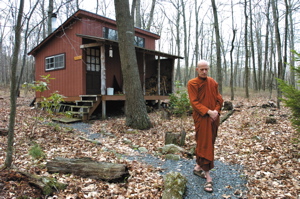 Bhante Rahula leaves his hut on the footpath to the dining hall at the Bhavana Society Forest Monastery Meditation Center on Back Creek Road in High View, W.Va. Alan Lehman/Daily  >>

"In [the] kutis, we don't have electricity or running water. It is very simple," Rahula said.

That simplicity helps in meditation, he added. For someone coming from a city atmosphere, it can take three to four days just to relax and be able to meditate.

The monastery practices Theravadan Buddhism, which derives from the oldest teachings of Buddha, Rahula said.

The mind must focus on one thing.

"Normally we take the breathing process ... [and] keep our mind in the present moment, not allowing it to think about the past or future," Rahula said. "I am just sitting here, just concentrating my breath."

But the mind can get distracted.

The key is to develop a kind of concentration where it isn't distracted by other things. Then the mind and body "attains a deeper kind of tranquility," Rahula said.

He added that an altered state of consciousness could arise out of meditation, and that many experience feelings of "extreme bliss."

"When [guests] come out, [meditation] helps them deal with their life better," Rahula said. "You don't get upset so much, because you realize it is just a mental reaction. You don't take things so seriously."

But to meditate properly, "it requires a long period of time and it requires the right kind of conditions. People can't do that when they are in the city," Rahula added.

The power line would not be built on the monastery's property, but would be roughly 100 to 200 feet away from the nearest cabin and a couple hundred feet away from other cabins. The close proximity could interfere with the meditation process through the crackling of the line and the construction, Rahula said.

He is also worried about the effects of radiation from electro-magnetic fields generated by the line.

The Bhavana Society asked the utilities to double-stack the line, which builds another line on top of an existing one. An existing power line is roughly a quarter of a mile away from the monastery.

The society rejected a proposal from the utilities to build the line further away from the monastery because it would go through the middle of a nearby junkyard and create complications.

Allegheny and other utilities reached an agreement last month with staff of the West Virginia Public Service Commission, which initially opposed the line.

The full commission will make a decision on the agreement and power line.

In the agreement, the utilities agreed to double-stacking. Yet they only agreed to use the method for a total of three miles over the 114-mile West Virginia segment.

Rahula said the three-mile limit is arbitrary, and the society will ask the commission to lengthen the limitation.

Allegheny spokesman Doug Colafella said he couldn't elaborate on any potential agreement with the Bhavana Society because the utility considers those discussions confidential.

"We've been working closely with them to address the concerns that they have and balance all interests related to this project," he said.

The Buddhists aren't afraid to stand up against the power line.

"Even though we are peaceful, we don't want to be taken advantage of in an unfair way," Rahula said. "The whole place is kind of sacred in that sense, and so [the utilities] shouldn't be infringing on sacred space by being so close."