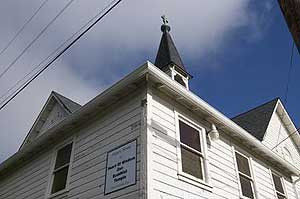 Scents of fresh paint and fine sawdust mingle in the air. The Douglas fir floor that has supported three congregations in the past 100 years is being refinished for its fourth -- the Zen Community of Oregon.

Buddhists believe in impermanence, the notion that nothing lasts forever, that a person must try to welcome change. On the surface, such thinking may seem at odds with the Christian understanding of the eternal God, but both concepts coexist on a corner not far from the Woodlawn Triangle in Northeast Portland.

A church that has been in continuous use for more than a century is being lovingly restored as a Zen refuge by a group who believe they probably won't be the last to hallow this space.

This story begins in about 1891, when the modest wooden church was built to house a Methodist Episcopal congregation. By 1959, the Methodists had moved on. Ukrainian Orthodox Christians had taken their place, installing a three-bar cross on the church steeple. By 1968, the building was home to the Church of the Living God, a historically African American congregation that thrived for a time.

But in recent years, membership dwindled. Last fall, unpaid debts meant the church property faced foreclosure and the prospect of being sold at auction in front of the Multnomah County Courthouse at 11 a.m. on Dec. 15.

Enter the Zen Community of Oregon. Founded in 1976, the small sangha, or spiritual community, began meditating in private homes and yoga studios. Later they rented space at Dharma Rain Zen Center and at St. David of Wales Episcopal Church, both in Southeast Portland. Along the way, the community bought a former elementary school in Clatskanie and transformed it into Great Vow Monastery. But a two-year search for their own space in Portland had stalled.

heart-of-wisdom-zendo.JPGView full sizeBenjamin Brink, The OregonianTony Mandella works restoring the old sanctuary floor in the zendo space, the Heart of Wisdom meditation hall.
"We were a little like a potted plant," says Patrick Green, president of the community's board. "We could only get so big. But as the community matured and more people were ready to teach, we didn't have the space to do it."

Then one evening in October, at the end of a meditation session, someone handed Hogen Bays, one of the spiritual leaders of the Zen Community of Oregon, a crumpled newspaper clipping. It was a public notice about the Church of the Living God property and the auction. Bays and members of the board met with the pastor of the congregation, the Rev. Roy Maxie, and visited the church.

"When we first came into the place, all those years of singing and praying had saturated the building," Bays remembers. "Everybody who walked into the chapel said, 'Ooh, this feels really good.' There were 120 years of spiritual practice soaking the walls."

Bays says he made Maxie an offer. The Buddhist community was willing to pay a fair price for the property, $205,000, so the pastor could pay off the church debts and have a little left over for his next ministry. It was an offer in keeping with the concept of karma -- that actions have consequences and good actions have good consequences. The Zen community could have waited for the auction and probably spent less to acquire the property, but Bays didn't want to benefit from another group's difficult circumstances.

"There's something to be said, especially with religion, about going in with a clean and healthy beginning," Bays says. "If we had taken advantage of somebody's bad luck, that would have set a certain tone."

The sale was final in December, just weeks before the auction date. The Zen community had already decided on what to call their new temple.

"We thought long and hard about names," Bays says. "Great Vow has 'Monastery' in its name so that we won't deviate and become a retreat center. 'Monastery' has a clear purpose." Ultimately, the community chose to combine two central Buddhist principles.

"Our tradition emphasizes wisdom as worthy of being cultivated," Bays says. "But wisdom can appear to be cool, removed. So we wanted to include the idea of warmth, compassion and outreach, the essence of real spiritual life. So, Heart of Wisdom."

The Zen Community of Oregon held a blessing of their new space on Jan. 1 and soon began work on the building. The roof was replaced with one meant to last 50 years. A new furnace was installed, walls were patched and painted. The wood floor of the sanctuary -- now a zendo, or meditation hall -- was taken up, the nails removed, the individual planks sanded and replaced so they could be refinished.

On a recent Wednesday morning, Evan Corcoran was among the volunteers working on the floor, checking each board for stubborn flakes of paint and pushing putty into the occasional crack. Corcoran has practiced Zen since 2000, consistently since 2005. He lived at the monastery in Clatskanie for more than three years before moving to Portland in February 2011.

"I owe a massive debt," he says quietly. "When I arrived at the monastery, I was borderline suicidal." The kindness and quiet that he experienced at Great Vow and the structure of monastic life soothed him, he says. "I needed time to not think."

Corcoran helped install the heated bamboo floor in the monastery dojo. Now he walks several blocks from his home to Heart of Wisdom to make what is, for him, a very personal contribution. "I work out of gratitude," he says. "I'll be tied to this place forever."

Nancy Kodo Conover, a member of the Zen community, coordinates the work on the temple. She says about 100 people have spent time on the project -- individually, in small groups and as larger work parties. Buddhist practice influences the way she and the others see their labor.

"Work is one of our practices," she says. "When we are mindfully doing the work, doing our best, taking care of our equipment and tools, we reflect on how the results of our work will be there for a long time, affecting the next people to come along. If we do a lousy job, someone will have to repair our mistakes.

"Someone built it for us. We are building it for the next generation to come."