New monastery on the path to change

OTTAWA, Canada -- The silence of the snowy fields, the stillness in the Sati Saraniya Hermitage: could such a peaceful place send a tremble through the world of Theravada Buddhism? 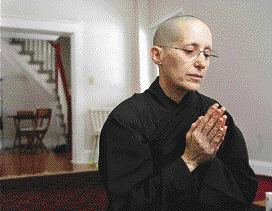 As a bhikkhuni, or nun ordained on an equal footing with Buddhist monks, she hopes to offer women the same full ordination she attained after decades of training. If she succeeds, it will be the first time a woman has been ordained in her order in Canada, says the diminutive 60-year-old. So far, she has had about six or seven inquiries.

There may be a catch, however. Buddhist law in some countries does not recognize full ordination for women, meaning they do not recognize Ayya's ordination or any she may confer on other women.

Some countries, like Sri Lanka, recognize Theravada bhikkhunis, but others don't. Burmese authorities arrested a woman who dared to undergo the higher ordination.

Sati Saraniya's brother monastery, Tisarana, is also near Perth, just a few kilometres away. However, it is tied directly to the international spiritual centre in Thailand, meaning it is now in the awkward position of having to be loyal to its parent, while also maintaining good relations with its fledgling sister hermitage. Tisarana's monks would be able to attend ordinations at Sati Saraniya, but they could not officiate.

Sitting on the floor of the hermitage's meditation room, Ayya said the Thai monks' recent decision against ordinations "would make anyone just cringe. It just smacks of misogyny."

"I've become a little bit radicalized, unwillingly. I didn't want to do this for politics or anything. I don't want the meaning of my life and my work here to get mixed up with this brouhaha."

An association of bhikkhunis across North America have said they would send sufficient nuns for any ordinations. "It's very heartening."

Last month, they expelled an Australian monk who tried to short-circuit this catch-22. He ordained four women and declared the lineage of nuns re-established.

Later, the monk, Ajahn Brahm, told The Bangkok Post: "It actually saddens me as a monk that women don't have the support to renounce (the worldly life). If they were given half the chance, many women would like to live the monastic life. They would flourish.

"The ones I've met who are seeking ordination are not demanding. They've come to me and said 'I'm not doing this for myself.' There's almost a sense of mission ... they're doing this out of high ideals, not out of personal gain."

Ayya Medhanandi (pronounced Made A NUN Dee) is one of just a handful of Theravada Buddhist nuns in Canada. She took her first-level ordination in 1988 in Burma, and her bhikkhuni ordination in Taiwan in 2007, where she was ordained under Buddhism's Mahayana branch instead of her tradition of Theravada.

She was born Mary Fiksel to a Montreal family of Holocaust survivors. "From a very young age, I would have conversations with God. He was my best friend."

In 1965, she began meditating. Not long after her marriage, she told her husband: "I have to go to India." Off they went, sailing across the Atlantic. It was, to put it mildly, "life-changing."

"We were escaping from a hurricane, and we lost some rigging. It was terrifying to be in such rough seas at night.

"I had this insight, that, if something were to happen to us, we'd be finished in a blink, so I was contemplating death.

"The only thing that had any meaning was the stars, and the ocean, and reaching land, any land, and having the sea grow calm.

"It was such a basic way of living, it made all the clatter and the obsessiveness of the world seem so foolish to me."

She eventually returned to North America, studying at Tufts University in Boston. With her masters of science in nutrition, she worked in Asia, Africa, and South America helping malnourished women and children.

Tufts' alumni website features her, smiling and bald-headed, talking about "spiritual nutrition." She laughs at the thought that "some of my professors must wonder if I've lost the plot."

With her final vows, she undertook to follow 346 rules or precepts for the rest of her life, wearing plain brown robes that she sews herself, keeping her head shaved, and eating only what she is given in her alms bowl. She cannot drive a car, work for money, or even handle money; her steward does that for her. The idea is that mendicants, or beggars, cannot retreat into their own spiritual world; to survive they must stay connected with the real world.

She began the Sati Saraniya Hermitage last year in downtown Ottawa and moved it this summer to 20 hectares of forest and field just west of Perth.

The sanctuary is already steeped in an austere serenity: no television, no radio, no newspapers. Not far from the 19th-century farmhouse, an impassive Buddha gazes out at a frozen pond.

Ayya (meaning venerable) and her fellow resident Nimmala, an aspiring nun and office steward, wake at 4 a.m., meditate at 5, do chores and then have breakfast at about 7 a.m. They work or study, and eat their last meal of the day at noon. At 7 p.m., they meditate and chant. By 9, they are in bed.

In January, Medhanandi will go into a three-month silent retreat, emerging from solitude only to eat and bathe.

In addition to the regular sittings at the hermitage, Ayya is often invited to teach in Toronto, Vancouver and Montreal.

She also instructed volunteers and staff in meditation and mindfulness at the May Court hospice on Cameron Avenue in Old Ottawa South, helping them face their own fears as they deal daily with pain, death and fraught family situations.

Staying at the Sati Saraniya Hermitage

The hermitage accepts as many as three female guests, but don't expect a Buddhist bed and breakfast.

There is no charge, but neither are there smoking, pets, laptops or BlackBerrys. Bring an alarm clock, however, as visitors are expected to follow the routine of rising early. Once there, guests are asked not to leave -- no popping into town for a beer and burger.

Finally, guests are asked to respect the eight precepts:

1. Harmlessness: not intentionally taking the life of any living creature.

2. Trustworthiness: not taking anything that has not been given.

3. Celibacy: refraining from any kind of sexual behaviour.

6. Renunciation: not eating after midday.

7. Modesty: dressing modestly, not beautifying the body nor seeking

distraction in music or entertainment.

8. Alertness: not indulging in sleep or laziness.