TAYLORSVILLE, Utah (USA) -- When the Parliament of the World’s Religions convenes Oct. 15-19 at the Salt Palace, bringing some 10,000 attendees from 80 countries and 50 religions together under one roof, among the workshop presenters will be Wijitha Bandara, a former Buddhist monk from Sri Lanka, who is currently a professor of religion at Salt Lake Community College. 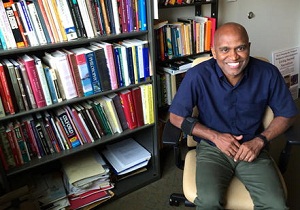 << Dr. Wijitha Bandara, a former Buddhist monk, now teaches religion at Salt Lake Community College. He will be a presenter at the Parliament of The World's Religions when it convenes in Salt Lake Oct. 15-19.

His topic: A Path Between Inclusivism and Exclusivism.

Layperson’s translation: How to teach religion to college students so they’ll actually pay attention, learn something and enjoy it.

Bandara, 47, who got his doctorate in the history of religions at the University of Virginia, is starting his fourth year of teaching at SLCC. Before that, he spent a year and a half at Utah State University.

And before that … well, let’s start at the beginning.

He grew up in Sri Lanka, the last boy among a family of 12. His mother died when he was 10. After that, his father took him aside and told him he’d like him to become a monk, thus fulfilling a tradition among faithful Buddhists of donating one of your family to the temple.

He said no at first, but “my father kept asking and out of respect I said 'yes.'”

Thus was the groundwork laid for the next 20 years. At the age of 11 the boy was enrolled in a monastery 13 miles away and never returned home to live again. His daily routine was up at 4:45 a.m., chores and chanting until breakfast at 6:30, followed by study until 11:30. Then came lunch — the last food, incidentally, of the day. School classes started at noon, lasting until 5, then it was more chores, chanting and meditation until a cup of tea at 7:30, followed by homework until lights out at 9:30 p.m.

The training was seven days a week, no days off.

At 27, he left Sri Lanka for an African monastery in Tanzania, and at 30 he moved to South Africa where he taught classes at a Buddhist university until he decided enough was enough. His father had passed away, and it was time to leave monkdom. By then he was fluent in five languages — Sinhala, Pali (the language of monastic rituals), Sanskrit, Tamil and English — and had studied Buddhism and other faith traditions for two straight decades. When he applied to graduate school at the University of Virginia, he was accepted with open arms.

He was teaching at Mary Washington University in Virginia when his wife Laura — an American from New Hampshire he met when she was traveling in Tanzania — saw a notice that a teaching fellowship was being offered at Utah State University.

“I think you’ll like the West,” she told her husband. “It’s sunny there.”

“We love it here, it’s so clean and beautiful,” says Wijitha. “People are so welcoming, and I love my students. We have very interesting dialogue.”

His classes typically contain a number of returned LDS missionaries, who think they had it rough until they hear what a Buddhist monk goes through.

The onetime monk relates to them in an important way.

“Through our experiences, we both learned rejection,” he says. “That is so valuable. Parents do not reject their children. When you get away from the protection of your parents and you get rejected for the first time, you go, ‘Ah, everyone doesn’t like us’ and you grow from that.”

The professor urges those who take his classes to not take sides.

“Everyone is so sensitive when it comes to this subject of religion,” he says. “I encourage my students to be observers, to neither include or exclude. If you do either one, you hate it or you go crazy.”

He likes to teach from the present, using current events to put the past into context.

“Rather than come at religion through its past, look at its past through what is happening today,” he explains. “I call it historical perspective.”

His sense of humor and perhaps the widest, brightest smile in the state of Utah complete the picture. He believes learning about religion ought to be a pleasant experience.

“Classes shouldn’t be a burden," he said. "If you’re relaxed you learn so much.”

That, in essence, is what Bandara will be presenting at 12:15 p.m. at the Salt Palace on Friday, Oct. 16. A Buddhist monk of 20 years telling everyone to lighten up. Or enlighten up, as the case may be.