Vanishing from public view to her discreet Irish hideaway, superstar Parker seems to be seeking tranquility down a path that many of her faith have trodden in the past

New York, NY (USA) -- Stressed by her latest challenge as producer of not one but two new cable shows, and dismayed by continuing rumors that her marriage is incontinent, superstar Sarah Jessica Parker seems to be finding tranquility down a path that many of her faith have trodden in the past: Becoming a Jew-Bu. 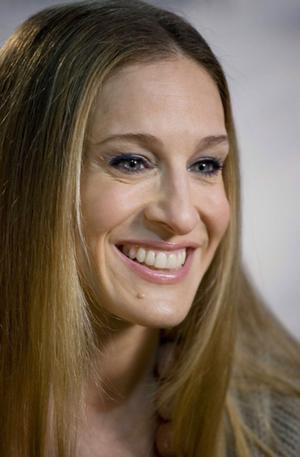 On a recent vacation to her family's vacation cottage in Ireland, Parker was spotted tucked away in a cozy corner of classy Nancy's bar in Muckros, reading a copy of the Sylvia Boorstein classic, 'Funny, You Don't Look Buddhist,' while sipping a glass of moderately chilled white wine and watching the world go by.

And at charming Kitty Kelly's, less than a mile from their Irish vacation home, the two were seen were seen wearing matching tops and avidly swapping intellectually challenging phrases from 'Words of Wisdom,' the latest book by best-selling Buddhist author Lama Surya Das, a childhood friend of CBS honcho Les Moonves when the two American boys were growing up Jewish on Long Island.

What's a Jew-Bu? 'It's a synthesis of Judaism and Buddhism intended to grasp the best of both religions,' explains one Hollywood power-player who has been a Jew-Bu for the past decade. 'It combines Buddhist thought with Jewish theology and structure, in effect incorporating Buddhist traditions such as meditation and chanting into traditional Judaism.'

'Buddhism fills a void left by her traditional Jewish faith,' confides a close friend of Parker's. 'It's a way for her to understand and diminish personal suffering, let go of fears, and to get pieces of mind. She still appreciates the strong community and traditions of Judaism, but wants to discover the wisdom of another religion without abandoning her born faith. She enjoys getting mail.'

Adds another close confidante: 'Sarah travels a lot, mostly by air. And in the Jewish mystical tradition -- where Judaism comes closest to Buddhism -- God exists on many planes.'

The first trickle of Jews began to convert to Jew-Bu practices about 50 years ago. The beat poet Allen Ginsberg was among them, and wrote, 'Born in this world/ you got to suffer/ everything changes/ you got no soul.' By the 1970s, there were enough Jewish Buddhists for Ginsberg's guru, Chogyan Trungpa, to talk about forming the Oy Vey school of Meditation. Now Jew-Bu's are the largest group of converts in the West, with all the hallmarks of an established movement. Armfuls of literature pay tribute to their conversion experiences: "The Jew in the Lotus," "One God Clapping," and, of course, "That's Funny, You Don't Look Buddhist!"

There is even a joke in the Jewish community about a typical Jewish mother who travels to a remote Buddhist temple in Nepal. Eventually granted an audience with the revered guru there, she says just three words: 'Sheldon, come home.'

'It is true that an enormous number of Jews are converting to Buddhism,' said one Rabbi who prefers to remain anonymous. 'I think they feel weighed down by the laws and rituals. Judaism is very good at camaraderie and community, but it doesn't leave a lot of space for the individual or for spirituality.'

'Sarah likes the fact that Buddhism, which she uses more as a philosophy than a religion since it doesn't have its own God, is packed with simple wisdom, including the notion that most human suffering is caused by our resistance to accepting our lives just as they are right now,' concludes one close friend of the vacationing couple. 'Sarah feels that we spend so much time scrutinizing the past and worrying about the future that the present evades us. Buddhism is all about letting go.'