From actor to philanthropist, Jet Li on TIME again 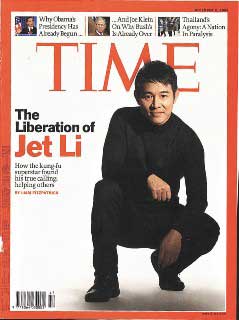 << Chinese movie star Jet Li appears on the cover of TIME's latest edition in Asia. He was invited as a distinguished guest by Former U.S. President Bill Clinton to attend the Clinton Global Initiative Meeting in Hong Kong on Tuesday, Dec. 2, 2008. [yule.sohu.com]

From martial arts star to philanthropist, the great action star expressed that it has taken him more than 20 years to learn that a smile is the best weapon while love, the greatest strength.

Earlier in 2002, Jet Li appeared on the cover as a superstar in Director Zhang Yimou's film "Hero", but this time he appears as the founder of his charity, the One Foundation.

Since the establishment of the foundation in April 2007, Jet Li has taken a year off filming, becoming a full-time charity worker and travelling tirelessly on foundation business. He has been publicizing the idea wherever he goes, calling for each person to donate one yuan (0.15 US dollar) per month to assist people in urgent need of help.

Till July this year, the foundation has collected 13.7 million US dollars with the majority of the money donated to help people affected in the Sichuan earthquake.

TIME magazine writes, "It is difficult to name any other A-list celebrity, not even Bono, who has made such a total commitment. There are plenty who touch down in Africa between albums or movies, but none has actually walked off the job as Li has done, at the top of his game."

It is reported the actor's family members live in Singapore while Jet Li, if not travelling abroad, stays at an ordinary flat with other staff from the One Foundation.

Jet Li said, in the past few years, he has learned from his Buddhist masters that people can reach their ultimate happiness only if they substantially lower their material desires.