An Interview with the Karmapa Lama 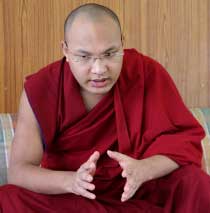 He is extremely popular among young Tibetans, partly because of his 1999 escape from Chinese hands, but also because he possesses rare charisma. The Karmapa passes much of his time in the protected top floor of Gyuto Monastery near Dharamsala, guarded by Indian policemen and intelligence officers who keep a constant watch on his activities. He has busied himself by becoming increasingly knowledgeable about environmentalism.

The Indian government, virtually since the Karmapa Lama arrived in Dharamsala, has been careful to not annoy the Chinese by allowing him unfettered movement, although he was allowed to visit the US in 2008. Revered as the third-highest spiritual leader in Tibetan Buddhism, the Karmapa escaped from Tibet and enraging the Chinese, who thought they were grooming him to be their docile face of the Tibetan religion.

Calling it Eco-Buddhism - Pure Aspiration, Bodhisattva Activity and a Safe-Climate Future, the 25-year-old Tibetan monk's efforts are regarded as a Buddhist response to global warming. Tibet is the third-largest store of ice on Earth -- nicknamed the "third pole," and it is an endangered one The Himalayan region's glaciers are the source of drinking water for much of Asia. He is reaching out to his followers to seek to revive the ecological consciousness of the Tibetan people.

"In order to save the Himalayas and Tibet from the threats of deforestation, climate change, and pollution, we have to be full of courage and believe whole heartedly that this endeavor is winnable" he says. "The alternative is unthinkable".

The Karmapa Lama sat down in late July at his temporal residence in Dharamsala to talk about his life, activities, recent restrictions imposed, and his need to travel overseas. Excerpts from the interview follow.

Saransh Sehgal: There has been great interest in your study of environmentalism, psychology and foreign languages. Is it because the restrictions on your overseas travel prompted you to spend energy on these subjects? What relations do you see between Buddhism and these subjects?

Therefore, I put my best efforts into having, at the least, formal conversations with them. Studying modern psychology and Tibetan Buddhism, with ancient and modern going hand in hand, is to deepen and brighten my knowledge. In the case of environmentalism, the environment has become an important issue and therefore it is important to understand it. I do all this voluntarily to fulfill my personal and social responsibilities of leading a society. It is not at all a new topic I had begun because of overseas travels.

Q: You have been handling an environment protection group. What has the group actually done- what are the findings?

Q: Will you try to help Tibet and China tackle pollution problems?

A: Our hope and request, which I think is important, is to consider environmental issues such as disruption to the natural flow of rivers, harm to river ecosystems, shortages of water and floods in numerous localities caused by construction of hydro-electric dams on the rivers of Tibet. The two nations, India and China, the most populous in the world, are facing the problems of water shortage and floods. This is becoming a very big issue.
It is not at all appropriate to treat the issues on which the very existence of humanity depends as political issues. As environmental issues should not be political issue, I urge everyone to deal with them sincerely and responsibly for the sake of humanity.

Q: Recently you have been denied permission to travel to the west where your teachings are being requested by your dharma centers and followers. Can you explain how this affects you personally and what would you say to those devoted to you who are feeling very disappointed due to your political restrictions?

A: In a recent development, I was to visit Europe and then the United States. There are people who have been waiting for this to happen for 20 years. But when it didn't happen, it broke their heart. Therefore, I both directly and indirectly tried to comfort them; with spiritual means I tried to bring peace and stability to their minds and expressed to them my hope for a visit to happen in the very near future. It appears that they are still harboring huge hopes.

Q: Were you given any particular reason for your trips to the west being canceled? If not - Is there a sense of frustration in you since most of your tours, well prepared by your followers, are being cancelled at the last minute without any reasons given by the Indian government?

A: I think you can ask government officers or other authorities about this. Maybe it's because the time allotted for the European trip is quite long; one month. Maybe this is a reason. This is a small reason, but perhaps for the main reason it would be best for you to ask them.

Q: Is it due to pressure from Beijing?

A: I don't know. The one reason we were given is that it is not possible. For details you should ask the concerned government authorities.

Q: Since your tour of Europe was refused in April, there has been a petition and campaign developed by some of your students in America to bring attention to your situation. How do you feel about your students taking an active role in bringing more awareness of your situation to the public?
A: As far as I understand, unlike we easterners, the westerners are strong-willed and have high hopes and expectations; with these characteristics they have undertaken such activities. Concerning the facts behind the cancellation, we have officially produced documents of clarification. Without clear knowledge of the situation and reasons given, and upon seeing me forbidden to make the trips, most of the westerners appear to have become worried.

Q: Can you explain why it is necessary for you to travel and teach the message of Buddhism and environmental studies to other centers outside India and Tibet?

Dharma centers are not the only ones inviting me; there are universities, societies working in the field of Tibetan culture and religion, groups promoting interfaith dialogue, and organizations advocating protection of the environment who have also invited me. Being looked upon as a leader of a society, I intend to use these invitations as a platform for the expression of my views and for reminding people of the importance of issues such as environmental protection.

In Tibet, in the past, we did not have the necessary conditions for making trips to faraway places such as the west, but the lineage of Karmapa with its long history of around 900 years have been following a rule of performing activities by visiting various places in Tibet; not staying in a monastery but always in constant movement with tents as accommodation.

This manner of performing activities is a unique characteristic of the successive reincarnation of Karmapas. Not living in a specific place, but rather moving about everywhere and having face to face communication with disciples, has become a rule followed by Karmapas.

Q: Would you play a role in finding the real successor of next Dalai Lama?

Q: What would you like to comment about the growing influence of China's picked Panchen Lama, Gyaincain Norbu?

A: I met him on many occasions when he was very young. After his maturity, I saw some videos of him; he is calm and humble. Quite recently, I saw a newspaper reporting His Holiness the Present Dalai Lama's hopes of him. For us, he is someone born as a Tibetan given the title of Panchen Renpoche by the Chinese government, and it is my hope that he will use the advantages he has to bring changes inside Tibet.

Q: What direction do you see the dharma taking in the 21st century? As spiritual teachings and holy texts are said to be 'Living Words,' do you see Buddhist teachings growing and evolving?

A: In my opinion, in the 21st century mental peace has become a necessity; it is pursued even more strongly than before. It appears that everyone of this century is aspiring for inner peace much more strongly than before; it is not a matter of different religious beliefs. Being very profound and extensive in the practices related to the mind, Buddhism is full of skills to bring about mental happiness.

However, being a religion, for some individuals it is bit hard for some individuals to derive benefits from Buddhism. On one hand, one can follow Buddhism sincerely as a dedicated devotee, and on the other hand, in the 21st century, I think it is important to bring about a change to Buddhism and turn it into a social education, and not just remain as a religion, so that even non-Buddhists can study Buddhist teachings on bringing about mental peace and the practice of compassion.

I think it is important not to impose restrictions for them in doing so. For example, as a religious matter, in ancient times yoga was kept secret, as something that not everybody could practice. But now it has become open and accessible as a method to bring about physical health. Some of the skills that we Buddhists have, such as finding inner peace, and developing love and compassion, can be taken as general education.

Q: The Dalai Lama has been in exile for more than 50 years, and we now see much less hope in seeing him return to Tibet. What about you? Do you see any hope for you to end your exile life?

Q: What advice would you give to young Buddhist practitioners who are concerned about the impact of recent environmental disasters?

Therefore, it is very important to be mindful of what we are using now and from where those resources come from. For example, sweet cheeps of birds and lush green forests are beauties; they are not something that we have created; rather those are naturally created beauties. However, if we cut down forests and harm animals, we are depriving ourselves of the natural beauties we enjoy; it is as if we are destroying the very sounds, smells and good tastes that we enjoy. Therefore, it is very important to be mindful.