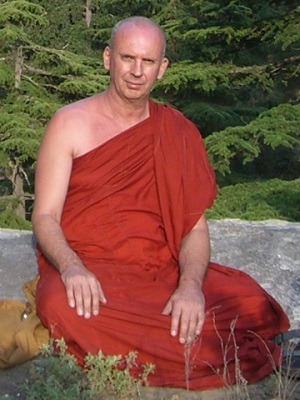 Bhante Shravasti Dhammika is a Australian born monk who has dedicated his life to teaching and studying Buddhism for the past 40 years. Born in Australia in 1951 into a Christian family and converted to Buddhism at the age of 18, Bhante Dhammika went to Thailand in 1973 with the intention of becoming a monk and from there to Laos, Burma and finally to India.

For the next three years, he traveled around India learning yoga and meditation and finally ordained under Venerable Matiwella Sangharatna, the last disciple of Anagarika Dharmapala. In 1976 he went to Sri Lanka where he studied Pali at Sri Lanka Vidyalaya and later became one of the co-founders of the Nilambe Meditation Centre and one of its teachers. He has spent most of his time in Sri Lanka and Singapore.

He currently resides in Australia where he is cherishing his time in solitude. During this time, he intends to commit to research and publication of new materials, one major work being the life of the Buddha as described in the Tipitaka.

For the last 40 years, Bhante Dhammika had written over 25 books and scores of articles on Buddhism and related subjects. His most popular books are "Middle Land, Middle Way" and "Good Questions, Good Answers".

As Bhante Dhammika is coming to 69 years old in 2020, he wishes to have his work preserved in posterity for the good of this and future generation of Buddhists. The Buddhist Channel has taken up his wish and will now invest to make it a reality.

The project requires upgrading and converting existing web based content into appbooks (Epub3) and database (MySQL).

Total project costs is US$ 4,500. The project will involve the development of 1 eBookshop and 2 Apps, as follows: