Single-handedly, the founder and curator takes visitors around Wat Ket Karam and the gallery it houses. Eighty-five years old, he could do with some assistance

Chiang Mai, Thailand -- The main lobby of Wat Ket Museum gives visitors a sense of serendipity. The area is adorned with Buddhist relics and statues dating back a century. 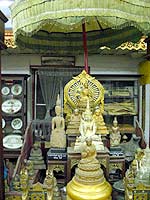 << Donated Buddha statues and those salvaged from the former residence of monks.

This century-old Thai flag is one of the museum's most prized possessions.
Music lovers will especially find this part of the museum enlightening.
The Wat Ket Museum is in dire need of cabinets such as these to store valuable artifacts.

Museums located around historically significant communities house a wealth of information that provide a better understanding of the way of life in the good old days and help educate the new generation about their cultural heritage.

Jarin Bain, curator and founder of the museum  >>

One such place is the Wat Ket Karam Museum in Chiang Mai that opened five years ago. The gallery is situated in a temple compound around the bustling Wat Ket community, once the commerce and transportation hub of the northern province.

Its founder, Jarin Bain or more affectionately Uncle Jack, single-handedly runs the museum that is open everyday from 8-11am and 1-4pm. There is no entrance fee, but he welcomes donations that go for the upkeep of the gallery.

Wat Ket Karam in itself is an integral part of Chiang Mai's cultural heritage. Its front part constitutes a school whose eye-catching recital hall features two Nagas (mythical serpents) along the steps and the Kiren (Chinese creature) at the entrance symbolising a blending of Thai and Chinese art.

According to Jarin, visitors can learn a lot about history of the community by taking a stroll around the neighbourhood. 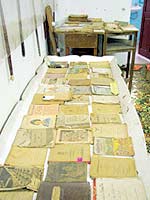 << The museum has a large collection of ancient Thai scripts and literature several decades old, but still in readable form.

The community goes back to the time when Chiang Mai's commercial hub was along the either banks of the River Ping. What made it special was its culturally diverse mix of residents - Chinese, Indians, Pakistanis and Burmese - who lived in harmony, he said.

The idea to start a museum didn't cross his mind until he heard that a century-old residence of monks in the temple compound was about to get demolished.

Jarin, who is 85 years old, explained that the wooden residence remained neglected for about a decade even after its occupants moved to new quarters. It was in such a dilapidated condition that senior monks decided to tear it down.

However, the younger monks felt otherwise. Being an elder, they brought the matter to Uncle Jack and broached the possibility of preserving the wooden structure so that it could remain a part of the community.

After inspecting the house, he found that there were many artifacts that could be salvaged and put on show in a museum so that the younger generation could learn about their cultural heritage. He also felt strongly that the lodge had to be saved from getting knocked down because it had been an integral part of Wat Ket community for a very long time. But a lot of work had to be done because the place was in shambles. 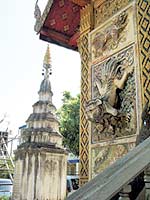 Spell-binding architecture in the compound of Wat Ket >>

Donated Buddha statues and those salvaged from the former residence of monks.
Jarin Bain, curator and founder of the museum.
The museum has a large collection of ancient Thai scripts and literature several decades old, but still in readable form.
Spell-binding architecture in the compund of Wat ket.

His daughter, who owns a ceramic factory, asked her friends to donate money for the renovation. A few months later Uncle Jack had 90,7000 baht at his disposal and a major uplift of the premises followed.

Parts of the house that were still in good condition were retained. Sifting through the piles of garbage Uncle Jack found old Thai flags, Buddha statues and amulets, houshold utensils, photos and books.

His close friend and antique dealer Anan Ritidate also pitched in by donating a number of artifacts from his personal collection. After hearing of Uncle Jack's resolve to establish a museum, Wat Ket residents began donating heirlooms and other objects of historical value to the museum's growing collection.

The variety of effects found in the museum are countless, he said, and there aren't enough cabinets to store them. This is a huge impediment because a number of pieces require to be kept in an enclosed space to prevent dust from settling on them.

<< The Wat Ket Museum is in dire need of cabinets such as these to store valuable artifacts.

Another drawback is the lack of bilingual captions to go with the articles on display. Initially, university students volunteered to compile the captions but sadly they haven't delivered.

"The money to run the museum comes from donations visitors leave in the till," explained Uncle Jack. "It is used to pay electricity bills and other maintenance costs. We get a lot of foreign guests. I don't have any assistant so I answer their questions in my broken English.

"Strangely enough, I started this museum with the conviction that it would help educate young-generation Thais about their roots and culture, but I must say that 70 percent of our visitors are overseas tourists."

There has been no form of assistance from Tourism Authority of Thailand (TAT) or any other government agency, laments Uncle Jack. Running the museum alone for somebody his age is not an easy task. The only help he gets is from a young novice who comes to sweep the floors daily. He doesn't have anyone to keep an inventory of items that are growing by the day. The museum also needs brochures to pass them on to visiting tourists.

He conceded that due to lack of proper security the museum is a sitting target for thieves and recalled an incident in which a person climbed the roof and stole a handful of old bank notes. An assistant, he said, would be welcome but then reliable and trustworthy people are hard to find. His biggest desire at the moment is to see TAT promote Wat Ket and the museum as a tourist attraction in its brochures.

Despite the obstacles, Uncle Jack is still able to offer visitors books on Dhamma teachings free of charge. Placards encouraging people to walk the path of righteousness adorn the lobby area. He complained that Buddhist beliefs have been supplanted by wrong beliefs that promote materialism and rituals that had no place in the original scriptures.

"Youngsters nowadays don't visit temples because they feel it is a drag," he bemoaned. "They don't even understand the prayers that are being chanted because it is not in Thai. How can you expect followers of Lord Buddha to practice his teachings when they don't understand what is going on in the first place?

"As an elder I also deplore the way some temples mishandle donations. Let's face it, there is so much corruption that people don't want to donate money any more. As a practicing Buddhist, I would like to urge the clergy to weed out the rotten apples and correct the wrongs that have infiltrated our faith before it is too late."

Asked if all his hard work and dedication had paid off, Uncle Jack broke into a smile, saying since the museum opened five years ago his health and English (spoken) have improved by leaps and bounds.

He is most busy on weekends when he personally guides visitors - that can number up to 50 - around the temple and museum, and while there are still a number of hurdles to be overcome, Uncle Jack finds solace in the fact that the museum is also doing its bit in helping spread the real teachings of Lord Buddha.