Colombo, Sri Lanka -- The 2012 issue of the World of Buddhism - identified as "the international Buddhist magazine" was released recently. The contributors discuss a variety of topics ranging from whether politics is a dirty game to the contribution made by learned Buddhist scholars and a few topics related to the teachings of the Buddha. 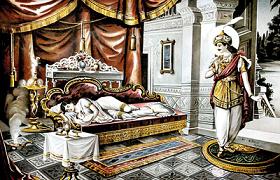 << A painting at the Gangaramaya Temple depicts the scene of Prince Siddhartha leaving behind his wife and child. Pic by Amila Prabodha

Describing politics as "a game of the many for the gain of the few", Dr. A. D.T. E. Perera is quite convinced that today's politicians in Sri Lanka are corrupt and are not concerned about their behaviour so long as they hold the authority through parliament. There is bound to be a debate on his line of argument in the article, in which he also refers to the Buddhist kings who were benevolent despots ruling the country, with a paternal feeling.

He concludes the article highlighting the need for everyone to "be aware of the cruel, cunning politician and make an effort to build up a new political culture where the cunning villain, the uncouth politician will have no say in moulding the nation."

In an interesting article titled 'On Detachment, Selflessness & Metta' , Urmila Bodinagoda observes that of late, criticism of the Buddha and His teachings, and even the Sinhala Buddhist has become insidious, better organized and increasingly frequent. The Mahavamsa and the Pali language have come under attack, she says. Arising from someone remarking that Prince Siddhartha abandoned his wife and child to go in search of glory, she takes great pains to provide a clear answer as to whether this was so.

The writer refers to the 'Naraseeha Gatha' - the verses sung by the mother to the son when Princess Yasodhara first sighted the Buddha - the then husband and father - coming to Kapilavastupura after seven years. "She and her son are still members of the royal family. He is now a mendicant monk. Their outlook necessarily is that of lay people. Even so, there is nothing but praise for the erstwhile husband and father in the 'gathas' - hardly the attitude of a wronged wife," Ms. Bodinagoda states.

After Prince Siddartha left, she was quite at home in the palace. Ms. Bodinagoda goes further and points out that the Princess did nothing to try and get Prince Siddhartha back when she knew about his renunciation. She also refused all the suitors who made a claim to take her hand when Prince Siddartha's renunciation became common knowledge.

She interprets Princess Yasodhara's refusal to come down from upstairs demanding that the Buddha who had come to the palace, should come and see her not as an attitude of a cowed down abandoned wife but as that of a cherished daughter and well loved wife. When her answer was "Let him come and see me", He goes to see her recognising her feelings after He left her. "Given all this surely they must have been sympathetic towards each other. Though undoubtedly grieved at her loss, surely did she understand and support her husband's renunciation," the writer says. She gives further examples of her behaviour to support this argument -like allowing Prince Rahula to follow the father. She also mentions Princess Yasodhara's psyche being sufficiently progressed as to become an 'arahant' is further proof of her being in possession of the qualities of detachment, selflessness and compassion to an appreciable degree.

After discussing the issue further, Ms. Bodinagoda concludes that as one stops being personal and becomes detached, doubt, pain and any other undesirable mental states will no longer prevail.

The journal pays tribute to Ven Balangoda Ananda Maitrya Thera through a well compiled appreciation by Bhikkhu Bodhi who describes the late Maha Nayaka Thera as one of the great personalities of Theravada Buddhism in the 20th century and states that it is testimony to his vast store of past merits that his life span stretched clear across the century. He describes his association with the late prelate in detail making the article an interesting and easy read.

An article by the late Ven Professor Walpola Rahula Maha Thera gives the reader a quick overview of development of Buddhism in its early stages.

The founding father of the Mitirigala Nissarana Vanaya - Asoka Weeraratna (later Mitirigala Dhammanisanthi Thera) has been recognised in the journal with the service he rendered in developing the much respected 'aranya'.

Senaka Weeraratna, Hony. Secretary - German Dharmaduta Society makes an interesting suggestion to commemorate the 2600th Sri Sambuddhatva Jayanthi - the formation of a League of Buddhist Nations. Of course, one can argue there are enough Buddhist organizations and what is needed today is action.

I wondered why the significance of the Sri Sambuddhatva Jayanthi has been totally ignored in the journal. In fact, most of the selected articles are ones written some time ago as some of the dates indicate. Also, there are so many contemporary writers who write eloquently and would have been willing to contribute to a journal that is distributed free. More international participation for a journal of this nature will lift up its image.