Buddhist wisdom and questions of science

Tokyo, Japan -- This book is a stirring attack on the hubris and blind spots of the scientific establishment, combined with an engaging presentation of Buddhist wisdom as the antidote. 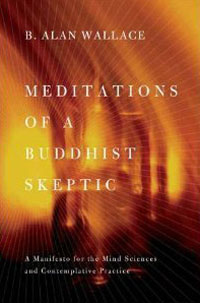 The author spent 14 years as a monk, ordained by the Dalai Lama, before acquiring degrees in physics and religious studies, so he is superbly equipped for his task. We sometimes hear that Buddhism — unlike Christianity — does not have a problem with the scientific worldview, since it is a radically empirical religion, skeptical about any claims that go beyond what can be experienced. But this science-friendly Buddhism often turns out to be a modernized version, shorn of traditional doctrines.

B. Alan Wallace upholds the full panoply of classical Buddhist teachings, as taught in Tibet, and does not shy away from a frontal conflict with the dogmatic presuppositions of contemporary science.

He shows that materialist dogma keeps scientists from any understanding of human consciousness and freedom, and leads them into absurdities such as the claim that "the precise condition of the universe shortly after the Big Bang necessitated the assassination of John F. Kennedy" (p. 113), or that Stephen Hawking's view that "the brain is essentially a computer and consciousness is like a computer program. It will cease to run when the computer it turned off" (p. 91).

Hawking tries to explain minds, which he cannot understand, by reducing them to computers, which he can. This erasure of spiritual phenomena is sustained by Orwellian "crimestop": "the faculty of stopping short, as if by instinct, at the threshold of any dangerous thought" (p. 9).

Coming to his positive proposals, Wallace first confronts us with the unpleasant doctrine of reincarnation: Death is not the end of our woes, but it consigns us to a new chapter in the endless round of painful rebirths, perhaps as animals — unless we are so privileged as to attain nirvana. This, he thinks, can be scientifically established: Young children remember their previous existence, and the Buddha had clear recall of all his past lives.

Just as Christian apologists find room for a "God of the gaps" in the evolutionary world picture, so scientists rely on "matter-of-the-gaps" thinking, when they assume that the "dark matter" and "dark energy" they postulate must be physical rather than spiritual. Here Wallace himself seems to fall into god-of-the-gaps thinking, too eager to secure a place in scientific cosmology for the spiritual substrate of reality.

Wallace makes the claim that Buddhism can found a new science of consciousness and of the physical universe. The International Shamatha Project, newly launched with the blessing of the Dalai Lama (www.shamatha.org), lays the basis for this scientific revolution by having people meditate in retreat centers for six hours a day, so as to attain the state of quiescence known as shamatha and thence proceed to clear insight into the fabric of existence. Discouragingly, Wallace tells us that, even in Sri Lanka, the number of people who had attained shamatha could be counted on the fingers of one hand and that things are not much better in Tibet (p. 148).

The meditator sees the ultimate emptiness of everything that claims to have stable, substantial identity, and discovers the role of subjective fabrication in the creation of what appears as an objective, physical world. Many scientists would agree that their discourse is a set of conventions, not a direct transcription of the way things really are. Quantum physics, which Wallace plays off against barren scientific materialism, shows that at the subatomic level it is impossible to separate the roles of observer and observed.

Extending this to the whole universe, he claims that "the past has no existence except as it is recorded in the present," and our decisions about what to observe determine "what kind of a universe emerges in our experience as being objectively real" (p. 85). Can Buddhist wisdom, even with the alleged support of quantum physics, shake the security of scientific fact and logic? Science, at its canniest, goes part of the way to meet Buddhist awareness of conventionality, relativism and mind-based interpretation of reality, but it cannot go the whole way.

Wallace might do well to differentiate more subtly between what is powerful and undeniable in the achievement of science and the blind spots he discerns. Likewise, he should expose his Buddhist orthodoxy to a more critical sifting between what is archaic and culture-bound and what could be developed into a viable mode of thinking for today. A mutually critical interaction between science and Buddhism would be a tremendous achievement, but as the present valiant effort shows, they are still talking past one another.

Meditations of a Buddhist Skeptic: A Manifesto for the Mind Sciences and Contemplative Practice, by B. Alan Wallace. Columbia University Press, 2011, 304 pp., $27.95 (hardcover)

-------------
Joseph S. O'Leary, professor of English literature at Sophia University, is an Irish theologian. His 2011 Etienne Gilson lectures on Western philosophy and Buddhist concepts have been published by Presses Universitaires de France.