Dedham, MA (USA) -- What started as a spiritual journey for Barbara Wilson Arboleda ended with a blog, a successful Facebook community and ultimately a book. 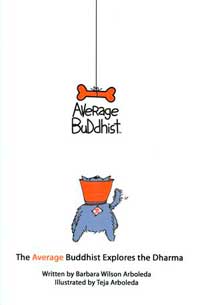 Arboleda, a Dedham resident and practicing Buddhist, recently self-published her first book “The Average Buddhist Explores the Dharma,” with a hope to create an authentic experience with Buddhism.

From her Voicewize studio in Dedham Square, Arboleda retold the story of her religious search that ultimately brought her to Buddhism.
In roughly 1998 she started searching for a group of people that she aligned with spiritually.

“I knew a lot of people who were of their own brands of spirituality,” she said. “I figured that there had to be some people out there that already had something set up. I had to go out and find that group of people.”

Ultimately what she did was interview a group of people in an attempt to get past the textbook approach to “whatever the religion was.”

“I wanted a [religion that was] more down to the day-to-day of what people who have this spiritual focus were doing,” she said.

It wasn’t until she read “The Tibetan Book of Living and Dying,” by Sogyal Rinpoche that something clicked.

“Where I ultimately ended up was in searching for what was Buddhism in America,” she said.

Buddhism has had a presence in the United States for decades, but with all things, the message was translated through the culture, she said.

Yet the truths remain the same – the core tenant of Buddhism is the four noble truths, Arboleda said.

“No. 1 is that there is suffering in the world. No. 2 is that, that suffering is caused by that clinging attachment to having things a certain way,” she explained. “No. 3 is that you can overcome that suffering. No. 4 is the way you overcome it is through the eightfold path.”

To put it simply, Arboleda said, “the core principal is that in our lives, we all have suffering. It is the nature of this world.”

Buddhism asks if we will make life worse or better for ourselves, and for others, she said.

Everything else outside of this core principal is commentary on it, she said. This is where her blog, (www.averagebuddhist.com), Facebook page (facebook.com/averagebuddhist) and new book come into play.

“The Average Buddhist” book is a compilation of her blog posts. It explores all facets of life, from emptiness, to cravings, to meditation, to ways to put it all into practice.

“(In this culture) we are sold on the idea that if we buy this thing we can reduce the suffering,” she said.

Her book asks readers to pause and ask, “do I really need this?”
“The Average Buddhist” is available on Amazon.com and Booklocker.com.