Critique on "The Decline of Buddhism in India"

The Decline of Buddhism in India: A Fresh Perspective
By KTS Sarao.
Munshiram Manoharlal. Pages 327 (with index and bibliography). Rs 895

New Delhi, India -- This book makes two assertions: One that there was a religion described as "Brahmanical-Hinduism" and two that Buddhism was essentially a religion of the urban elite with little support in the countryside even at its height. Further, the author argues that Buddhism was centred on monasticism which was always well removed from its lay supporters. 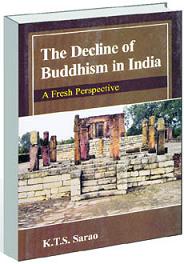 On this basis, it then goes on to argue that the seeds of its destruction were within Buddhism itself and that once India’s cities declined in the late-Gupta and post-Gupta age, and newer devotional forms of Buddhism such as Vajrayana, Mahayana and Tantricism emerged, support for Buddhism dwindled and its supporters gradually mingled with the ranks of those who believed in what he calls "Brahmanical-Hinduism" and Islam.

No evidence in support of any of these assertions is given. Rather, it ignores the considerable information it provides itself which undermines the very idea that there was anything called Brahmanical-Hinduism in India right upto medieval times. On page 209, the author points out that Chandragupta Maurya was a Jain, his son Bindusara a follower of the Ajivikas and grandson Asoka, a Buddhist. Asoka’s son Jalauka was a Saiva and his grandson Sampati, a Jaina. All that the author concludes from this piece of information is that "It is hard to find single-minded allegiance towards Buddhism either running through a family for several generations or for that matter all the members of a family owing allegiance to Buddhism collectively."

The broad religious history of India clearly indicate that Indian society in ancient times included a large number of sects of varied beliefs and persuasions who worshipped a variety of deities; these sects did share a common belief system in ideas such as karma, the theory of transmigration of the soul and rebirth and so on. But merely on such grounds to call them believers in "Brahmanical Hinduism" would be a very serious misreading.

On the little support that Buddhism enjoyed in its heyday, the book provides equally sketchy evidence. It contends that Buddhism had its supporters primarily among the ranks of the business community based in urban centres. As evidence, the author says that "A statistical study of the frequency of urban and rural settlements mentioned in the Vinaya and the Sutta Pitakas show that over 95 per cent of these were urban.

More than 84 per cent of the human Boddhisattas mentioned in the Jatakas were directly connected with urbanised elite families…" (page 215). To take religious texts of this variety as a literal representation of reality requires the "suspension of belief, associated with fiction, not history.

The Buddhists themselves did not take it like that. One scholar has pointed out a statement ascribed to the Buddha in the Ksudrakavastu section of the Mulasarvastivada Vinaya advocating the use of stock names and stock characters.

Certainly, donative inscriptions to Buddhism were largely sponsored by merchants and artisans but the very same social groups extended donations to Vishnu and Siva temples as well. If there are few if any donations recorded by peasant-landholders, this does not mean peasants were indifferent to Buddhism; merely that they were poor.

The author has ignored the enormous amount of archaeological, literary and epigraphic evidence of the considerable support commanded by the Buddha as a deity in India for over 1500 years and till the beginning of the second millennium AD. He acknowledges the argument that till the eighth century AD at least the Buddha was accorded the position of a universal deity and the ceremonies by which a king attained status were elaborate donative ceremonies entailing gifts to Buddhist monks and the setting up of a a symbolic Buddha in a stupa (page 183).

So strong was the position of the Buddha that at least four different Puranas cites him as an avatar of Vishnu. But such evidence finds little place in the body of this text. The author cites considerable information on how the Arab and Turk attacks destroyed major Buddhist monasteries and slaughtered hundreds of Buddhist monks, especially in Sind and in eastern India, but he dismisses these attacks as the usual suspects. These attacks led, he himself says, to the gradual and voluntary conversion of the Buddhist population of these areas to Islam where they figured that they might enjoy greater economic opportunities and escape the tax for non-Muslims.

What motivated such large numbers of Buddhists to voluntarily convert to Islam, we can never know. There is much evidence from contemporary sources of the times that they did so voluntarily. Where Buddhism had been strongest, turned into strongholds of Islam later.

The story of the rise and decline of Buddhism in India is a complex story with important bearings on the history of the peninsula. Unfortunately, this author seems to have been far too caught up with a variety of prejudices to have added much to the story.