New book explores the nexus of Buddhism and law

“The study of Buddhism itself is pretty much brand new ... There has been serious study only in the past 20 to 30 years. ” - Rebecca French, professor UB Law School

Buffalo, NY (USA) -- A rapidly growing field of study - the influence of Buddhist thought on legal systems worldwide - has its first book-length overview with a new compilation conceived by a UB Law School faculty member who is a pioneer in the field. 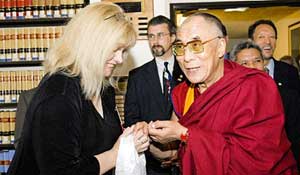 << Rebecca French with the Dalai Lama during his visit to UB in 2006. Photo: Mark Mulville

“Buddhism and Law: An Introduction” (Cambridge University Press) was co-edited by UB Law Professor Rebecca R. French and Mark A. Nathan, an assistant professor in UB’s history department and its Asian Studies Program. Interdisciplinary in nature and broad in scope, it challenges the idea that Buddhism is an apolitical religion without implications for law. In fact, the authors argue, Buddhism provided the architecture for some legal ideologies and secular law codes, and added a new layer of complexity to existing legal systems elsewhere.

“There are almost no books on Buddhist legal systems,” says French, who wrote one herself in 2002 with “The Golden Yoke: The Legal Cosmology of Buddhist Tibet” (Snow Lion Publications). “The study of Buddhism itself is pretty much brand new. Buddhist studies departments have existed in universities only in the last half century, and there has been serious study only in the past 20 to 30 years. But scholars are now working on the Vinaya and its influence on secular law.”

The Vinaya is the law code, written for the followers of the Buddha, that makes up the first one-third of the Buddhist canon. French says dabblers in the religion, especially the reductionist, commodified version familiar to many Americans, might be surprised at the vehemence - even the harshness - of the Buddha's words.

“The Vinaya is a series of encounters between the Buddha and a person who has committed some offense,” she says. “They have a conversation, they talk almost Socratically, then he states what the person has done wrong and what the punishment is.”

The book, almost a decade in the making, grows partly from a couple of conferences organized by French and Law School Professor David M. Engel, who has longtime ties to Thailand. It’s organized geographically, rather than thematically, with contributors taking up topics from India, where the religious tradition began; South and Southeast Asia, including Sri Lanka; East Asia, including China, Japan and Korea; and North Asia and the Himalayas region. French contributed one chapter, on Buddhism and law in Tibet.

“There’s a lot of diversity in how this plays out,” French says. “Many people thought Buddhism was so diverse and so scattered that there wouldn’t be central ideas. The variety has been interpreted as a lack of centralization, as a lack of coherence and as a lack of true law. I would argue that we just need to start looking. The relationship between Buddhism and law is completely different in different regions.”

For example, she says, in Burma (now Myanmar), scholars have shown that law codes were built from scratch based on Buddhist teachings. Contrast that with the situation in China, where, French says, Buddhism arrived after the nation already had a strongly established legal system.

As a field of study, Buddhism and law is fraught with complexities, from the voluminous extant writings on the Buddha’s teachings, to the problems of translating from the languages of heavily Buddhist countries and their long and complicated histories.

But, says French, “most people are thinking about the ethical and foundational issues of legal systems - how a culture gained those things and what they meant. The Judeo-Christian foundations of our own legal system are extremely important. Similarly, the Islamic influence on the legal system is very important in Islamic countries. Why wouldn’t we want to know about the basic religious foundations of an enormous segment of the world?”

“Buddhism and Law” is dedicated to Frank E. Reynolds, an emeritus professor of the University of Chicago Divinity School and an early proponent of Buddhist legal studies. French says Reynolds visited and spoke about Buddhist thought in Thailand at a book launch party held at the Law School.