Finding Buddha and getting a life

Title: Buddha or Bust: In Search of Truth, Meaning, Happiness, and the Man Who Found Them All
Author: Perry Garfinkel
Publisher: Random House, 336 pp., $24.95 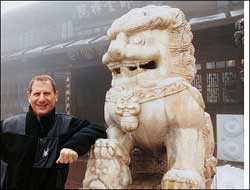 Boston, MA (USA) -- Perry Garfinkel's bon voyage in search of Buddha reads like a Seinfeld script. The fiftysomething Jewish guy from New Jersey lay on his back on his mother's parlor carpet. Plagued by a fast disintegrating spinal disk, and a similarly pinched bank account, Garfinkel's life infrastructure was collapsing. Even mom, it seemed, was a study in lack of support.

"You don't have a pot to pee in or a window to throw it out," she admonished him on the eve of his departure on a six-month circumnavigation of the globe to trace the footsteps of Buddha for National Geographic magazine.

If the central tenets of Buddhism remind followers that most of life is tedious, all hell breaks loose from time to time, and suffering is inevitable, Garfinkel was stalking nirvana before he even got to the airport.

A half year later, with his article on the cover of the December 2005 international edition, Garfinkel conceded that his wealth of material was too rich for only 22 pages. He went back to his desk, and the result is ``Buddha or Bust: In Search of Truth, Meaning, Happiness, and the Man Who Found Them All."

The book is largely defined by what it is not. Not self help. Not philosophy. Certainly not religion. Garfinkel, who lives on Martha's Vineyard, sins his way around the world. Fast enough for the beach yet dense enough for the scholar's library, ``Buddha or Bust" is an internal adventure story.

As John McPhee and Paul Theroux offer lush descriptions of physical landscapes in their works, Garfinkel surveys the internal world with equal scrutiny. The plot points of his itinerary play a supporting role to his -- and his subjects' -- spiritual reactions to the circumstances around them.

As Garfinkel explores the contemporary applications of Buddhism, which he describes as a ``2,500-year-old survival manual for a ridiculous world," these circumstances take him to disparate places. As expected, he literally traces the historical footsteps of the born prince Siddhartha Gautama -- who like a rock star became known by a single name, Buddha -- through Nepal, India, Sri Lanka, Thailand, China, and Tibet. But Garfinkel's mission to separate Buddhist fact from fiction also takes him to a retreat at Auschwitz, hospices in California, and a New Delhi prison where inmates are offered Buddhist-inspired seminars on the pleasures of peace. He even finds a taste of nirvana in the sushi served at a baseball game in Japan.

The book's greatest success is the gentle juggling of scholarly history and contemporary context. Just when the Buddha's time lines and travels get a little thick and dusty, Garfinkel ropes the reader into the present. He describes the Buddha as the ``original baby boomer, indulged by his parents' opulence and depressed by their empty materialism, a guy who was in need of a long road trip to clean out his head."

Were it not for his initial incomplete homework on Buddhism -- and the equal naivete of the editors at National Geographic who evaluated his pitch -- Garfinkel's journey of enlightenment may have remained stateside. Central to his proposal was the notion that Buddhism and its practitioners were averse to war. How wrong he was became clear when he arrived in Sri Lanka, where the minority Hindu and Muslim Tamils and the Buddhist majority Sinhalese have slaughtered each other for decades in the name of religion.

A book about Buddhism without the Dalai Lama would be akin to a baseball history absent Babe Ruth. Garfinkel scored the ultimate mano-a-mano with his holiness by a combination of perseverance and preparation.

``The whole idea of interviewing the Dalai Lama was intimidating," he writes . ``It's also quite impressive. Try saying it out loud in front of a mirror as though you were telling friends at a dinner party: `I'm going to do a one-on-one interview with the Dalai Lama. . . .' Right there alone in the bathroom, you will impress even yourself. I did. And then think about . . . conducting an interview that will keep him interested and a paralyzing intimidation quickly sets in. I did and it did."

Garfinkel's impressive legwork kept the Dalai Lama intrigued far beyond the scheduled hour. A month earlier, he had traveled to the Dalai Lama's native village in Tibet and had become friends with the leader's relatives, in hopes a few anecdotes from home would break the ice. In fact, according to Garfinkel, it rather melted the holy man's heart.

In ``Buddha or Bust," Garfinkel takes a prodigious 2,500 years of history, geopolitics, religion, love, and death, and manages to digest it all . No small accomplishment.