San Francisco, USA -- Contrary to existing dogma in the mental health field, this book posits, trauma survivors have an innate capacity to heal themselves without medical or formal psychological intervention. There is a "healing force hidden in all of us, even if depleted by violence, that is always striving for survival," writes Richard Mollica, professor of psychiatry at Harvard Medical School and director of the Harvard Program in Refugee Trauma. In "Healing Invisible Wounds," he charges that "superficial, sensational media reporting of tragedies and debriefing therapy by misguided mental health workers" cause more harm than good for victims of violence. 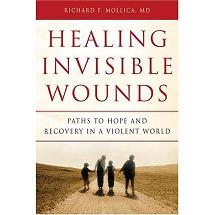 Mollica, who also holds an advanced degree in religion and philosophy, bases his theory of psychological self-healing on 25 years of interviewing and counseling war refugees, victims of torture and survivors of natural disasters. He uses personal, or "trauma," stories from Khmer Rouge survivors, Bosnian doctors and Rwandan genocide witnesses and applies them to survivors of more common crises, such as sexual abuse, life-threatening illness or death of a loved one by accident or violence.

The vignettes contain relatively few graphic details of deaths or torture, so readers need not fear being overwhelmed with gruesome images.

"Because of doctors' theoretical hubris and the grandiosity of their models ... [they] are unable to harness the therapeutic power of self-healing," he writes. He accuses doctors of throwing medicine at the problem and mental health practitioners of overemphasizing the brutal facts of the trauma story, told over and over, in their attempts at "debriefing."

According to Mollica, victims of violence must play an active role in their healing. Not only telling but interpreting one's trauma stories is crucial for healing. Understanding the cultural meaning of the trauma, taking a new perspective on it and realizing the motivations of the perpetrators, are necessary to reframe the trauma for the survivor. "Storytelling coaches" (e.g., doctors, social workers, therapists) can guide survivors in telling their stories without overwhelming listeners with horrifying details. The realization that by telling their story they will pass on valuable lessons in dealing with loss and tragedy also contributes to healing.

Mollica writes in straightforward language without an excess of psychological theory and jargon. He shares knowledge of Cambodian culture, rituals and values as well as the role of Buddhism in healing, and he stresses the need for practitioners to understand the cultures of the people they are attempting to help. He validates women's torture experiences worldwide, including sexual abuse and rape, and he recognizes that societal condemnation of women who are victimized in this way serves to retraumatize them, hindering healing. Although not contributing anything new to the debate in the medical and psychiatric fields, Mollica espouses spiritual and humanistic practices like prayer, meditation and religious rituals for improving a person's physical and psychological health. In interesting asides, he references works of art and literature to illustrate "metaphorical insights to mysteries that are beyond the abilities of science and medicine to explain."

His book presents a theoretical basis for treatment of adults, and could be improved by giving greater space to how to apply this information, particularly for mental health workers who treat victims of violence. He presents only one truncated case study of an individual therapy patient. Arguments occasionally remain vague, and the writing slips into the general, sometimes taking on an opinion page tone: "In the case of refugee assistance, humanitarian relief organizations must take up strong positions against situations that are clearly wrong." Also, some explanations are oversimplified, for example when he writes of suicidal people needing "courage" to make the decision to live another day, and some sections lack sufficient interpretation of the vignettes. Mollica touches on the neurobiology of memory and trauma and the concept of resilience, but doesn't examine how individual differences might affect recovery.

Mollica has identified several measures that encourage self-healing: engaging in altruistic acts, working to provide for oneself (rather than accepting long-term handouts), spirituality (but not necessarily formal religion), humor, physical exercise, relaxation techniques and good nutrition. Empathic communication between healer and patient also has restorative power, as does the creation of beauty, e.g., making art, tending a garden, keeping a journal, creating puppet theater. Recalling dreams, and understanding what they are trying to teach, can also help.

Mollica ends with a social call to arms, criticizing the media for its obsession with gore and devastation when news reporting could be used productively. "The media could play a critical role in supporting reconciliation [between warring countries] by sharing, through in-depth television documentaries and newspaper stories, the traumatic history of its citizens, instead of constantly repeating the emotionally charged accusations and denials of the violent events. ... The media need to be encouraged to present the full trauma story, not just the horrors."

Kathy Briccetti, a school psychologist in Oakland, is at work on a memoir about three generations of adoption and absent fathers in her family.

"Healing Invisible Wounds: Paths to Hope and Recovery in a Violent World