Kathmandu, Nepal -- Gandhara is a region in the north-west of the South Asian Sub-continent, comprising of the Peshawar valley, including the present day districts of Peshawar, Mardan, Swat and Dir, as well as Malakand and Bajaur agencies on the west bank of the Indus in the North-West Frontier province of Pakistan and Taxila beyond the Indus on the east. 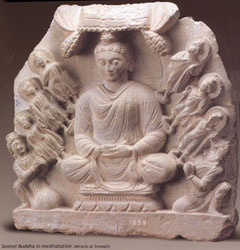 The Rigveda, an ancient sacred book of the Aryans includes a poem on Gandhara and the Atharvaveda has talked about the Gandharis, people of Gandhara. The name also appears in ancient inscriptions dating back to Achaemenian Persia. The Behistun inscription listing the 23 territories of King Darius I (522-486 BC) includes Gandhara along with Bactria and Sattagudi. An inscription found in the remains of the Persian Susa Palace lists the regions from which materials to build the palace were supplied - according to this inscription, the timber came from Gandhara. In the book of "Historica" by Herodotus, there is the name of Gandhara, as one of the region of territory where tax was collected by King Darius I.

Geographically, Gandhara is a triangular piece of land, about 100 kilometers across east to west and 70 kilometers north to south, on the west side of the Indus river which is surrounded on three sides by mountains. The earliest record of Gandhara dates to the sixth century BC in the days of the Buddha. Gandhara was a part of reigns of Cyrus II and Darius I. At the end of the 4 th century BC, Gandhara was invaded by Alexander the Great. He captured and held for a time the town of Ora in Swat (the Udegram ruins), Pushkalavati (Charsada), the capital at the time and the area around the Indus river basin Hund. Alexander is said to have stayed in Taxila for five days. He was succeeded there by Chandragupta, founder of the Maurya dynasty, who extended his control from northern India to the regions south of the Hindukush mountains.

King Asoka further expanded the imperial territory setting up monuments to mark his reign throughout Gandhara in Shahbaz Garhi, Mansehra and Taxila. At the beginning of the 2 nd century BC, Demetrius of Bactria invaded the Punjab region and established another Indo-Greek kingdom with Taxila as its capital. In the 1 st century BC, the Sakas of the north overran Punjab. Coins bearing the representation of the Saka kings Maues, Azes and Azilises testify to their control of the region at that time. The Parthian king Gondophares, reigned Gandhara in the beginning of the 1 st century AD.

The Kushan took over Gandhara under the reign of three kings Kujula kadphises, Vima I Takto and Vima II Kadphises. Later king Kanishka extended the dynasty's domain further to the east and established a great empire in north India and had his capital at Purushapura, present day Peshawar .

Buddhism flourished under his reign. Kanishka was succeeded by Vasishka, Kanishka II, Huvishka and, Vasu Deva. The history of the Gandhara region is given in ancient Chinese records as well.

Hiuen-Tsang mentions Purushapura, Pushkalavati, the Kanishka stupa and temple, King Asoka's stupa and other sites, but by the time he arrived in Gandhara kingdom was already in decline and subjugated to the Kapisa Kingdom. He notes with regret the deterioration of villages and roads and Buddhist temples. Buddhism was not to revive in Gandhara after this. Hindushahi flourished in the 9 th century AD and in the 11 th century AD the region was taken over by the Ghazna Kings.

The Buddhist art appeared in this region in the 1 st century BC and lingered on till the 8 th century AD. The earliest image of Buddha in human form appeared in the coins of Kanishka. Individual images were enshrined for worship in the chapels of the monasteries and sometime in the niches of the stupas. His hands were shown in the gestures of reassurance, meditation, preaching and earth-touching. He is always shown in a simple monastic robe with a halo around his head. Images of Maitreya were also carved in very large numbers. He can be recognized by his hair style and water-flask.

As Buddhism spread from one country to another in the course of history, Buddhist art assimilated the local styles of different Asian countries and has thus bequeathed an artistic legacy whose great beauty lies partly in its rich diversity. One important characteristic of Gandhara art is its passionate love for art showing the life of Buddha. If we put in order the extremely numerous Gandhara relief of Buddha stories which have been unearthed piecemeal, the number of scenes portrayed actually exceeds hundred. Starting with the story of events surrounding the birth of Buddha, the legends of boyhood and youth, the renunciation seeking the truth, then the enlightenment and the first preaching. Then he proselytizes for the spread of Buddhism in various ways including stories of miracles. Finally, there are scenes of Parinirvana, placement in the coffin, the burning of the body, disposal of relics, and the raising of the stupas.

Gandhara sculptures decorate the base of the stupas or stand in niches within the monasteries. The base has different panels, each separated by pilasters, with square corner pillars having elaborate bracket capitals of different orders. The pillars support the entablature, marked by architrave frieze and cornice of different designs. One such stupa of the Parthian period is called double-head eagle shrine at Sirkap because its base shows three different types of arches from three transitions, the central arch having such a bird on its crown. It is from the stupas of the Scythian period at Sirkap that some architectural pieces have been recovered and they speak of the Scythian style of Gandhara art. The pieces are decorated in their front with human figures, male or female, in an outlandish manner, with tight fitting clothes on muscular rigid body, curly hair, roundish face, open eyes, loosely ornamented, sometimes having slovenly worn garment in rigid folds.