The popular New Age guru and author reimagines the spiritual leader's life in a new novel.

Torrance, CA (USA) -- For years, Deepak Chopra has been writing how-to books revealing the path to physical well-being through spiritual awareness. In his latest book, he takes a novel approach to that goal -- literally. 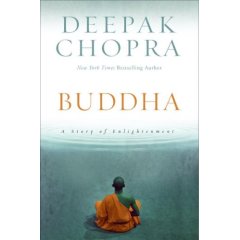 In his fictionalized Buddha: A Story of Enlightenment, released in February by Harper Collins, America's go-to guru has written an account of the life and times of Buddhism's great spiritual leader.

Chopra, whose books have been translated into 35 languages and have sold more than 20 million copies worldwide, will be at Borders Books & Music in Torrance tonight to read from his new work, which is being billed as a "reimagining of Buddha's life."

Although fiction is a departure from the bulk of Chopra's work, this isn't his first attempt at the genre.

He has written previous novels and even a few screenplays. The latter includes a story of India's Prince Siddhartha, the young heir to his father's throne who gives up worldly riches to seek wisdom and spiritual perfection, eventually becoming the first Buddha. Chopra's new book is largely based on that screenplay, which has yet to be made into a film.

Chopra said he knew fiction would be an effective approach to telling the spiritual leader's story.

"Fiction is a much better way for telling the truth than fact," Chopra said. "We know the historical story, so I wanted to look at what [Buddha] was struggling with inside, his inner demons, his own shadows. In a sense this is everyone's struggle. In order to find your own awakening you have to confront your dark side."

Chopra's book, organized into three parts, spans the spiritual leader's journey, beginning with young Prince Siddhartha's early years as a motherless child and heir to the throne, through his days as the wandering ascetic monk known as Gautama. The book concludes with a section covering his enlightenment, the point at which the one-time prince becomes the all-knowing Buddha.

Although generally recognized as the founder of Buddhism, Gautama shares the title of Buddha with others throughout history who also reached enlightenment. Gautama did not consider himself a deity, a messenger of God or an anointed prophet. He was, as Chopra said, more of a practical philosopher.

"When he was asked at the end of his life, 'Who are you?' [Buddha's] response was 'I am awake, I am alert, I am aware,' " Chopra said. "His whole message is to expand our consciousness and our awareness so then we have more love, compassion, understanding, creativity, insight, intuition, imagination and inspiration, and we are also able to harness all of our intentions."

Though Chopra's novel is set in the time that Buddha is said to have lived, sometime around 500 B.C., it takes a contemporary approach to storytelling and dialogue, so as to engage modern audiences.

But, Chopra said, the spiritual message at the heart of the story is one that resonates across time and culture.

"Originally I was going to call this book I: Buddha, the author said, "because the name Buddha simply means 'the enlightened one.' Every one of us, if we are spiritually inclined, goes through the same dilemmas: What is the meaning of suffering? What is the meaning of life? Why do we grow old and sick and die? What happens to us after we die? Do we have a soul? Does God exist?

"Buddha went through an experience and ultimately moved into the answers, and I wanted to share what I imagined that experience was."

Although deeply spiritual himself, Chopra shuns any direct connection with established, traditional religions.

"I've been influenced by Hindu, Buddhist, Christian and Judaic teachings," he said. "I'm as familiar with the Kabbalah as I am with the Torah and with Christian teachings.

"I draw on the useful, practical and insightful teachings of the great religions, only that which helps us to heal our emotions and our spirit," he said. "I think spirituality is a domain of awareness where we experience universal truths. As soon as you make it a dogma, or an ideology or a belief system you lose essential truths of those teachings."

Raised in New Delhi, Chopra said he was brought up on stories of the Buddha and often imagined what the enlightened one's inner experience must have been during his spiritual struggles.

A medical doctor who came to the United States in 1970, Chopra's reliance on Buddhist teaching has guided him, in part, through dozens of best-selling books, a world-famous health and wellness center with locations in New York and Southern California and his latest endeavor, the Alliance for a New Humanity, a foundation that aims to create global communities for what he calls "peace consciousness."

His writing, along with his work on the foundation and his 20-city book tour, keeps the 60-year-old busy. But he said his schedule never tires him out.

The author and motivational speaker attributes his great success and tenacity not to Buddha or any of the world's other great spiritual leaders but to his upbringing by his parents.

"My mother used to tell me to pursue excellence and ignore success," he said. "I've tried to always keep that in mind."

• Reading/signing: Deepak Chopra will be reading from and signing copies of Buddha: A Story of Enlightenment from 7 to 8 tonight at Borders Books & Music, 3700 Torrance Blvd., Torrance. For more information, call 310-540-7000.