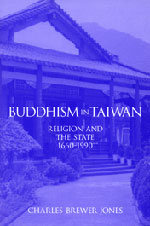 Taipei, Taiwan -- While Taiwan is well-known as a high-tech powerhouse, it is also one of the world's great bastions of Buddhism. Organizations like the Buddhist Compassion Relief Tzu Chi Foundation have won international acclaim for its volunteer efforts in disaster-ravaged countries. A book explains how Buddhism in Taiwan has developed under the various governments that ruled the country through the years. Taiwan Journal regular contributor Philip Courtenay reviews the book.

In his introduction to "Buddhism in Taiwan: Religion and the State, 1660-1990," published in 1999 by the University of Hawaii Press, Charles Brewer Jones states that the study originated within the growth of Taiwan studies as a field of inquiry in its own right. He sets out the primary focus of the book as the history of Chinese Buddhism as an organized religion in Taiwan.

To this end, the study is divided into three parts on a chronological basis, dealing in turn with the Ming and Ching dynasties (1660-1895) in one chapter, the Japanese colonial period (1895-1945) in two chapters, and what is titled "From Retrocession to the Modern Period" (1945-1990).

The single chapter in the first part, titled simply "The Ching-Dynasty Period," begins with a brief review of the arrival and development of Buddhism in Taiwan. Jones cites the 1971 Gazetteer as recording the presence of Buddhist monks among the earliest Chinese inhabitants of Taiwan before the Dutch colonization in 1624. He describes these as maintaining only the most minimal forms of Buddhism, however, and a more substantial level of its presence awaited the arrival of larger numbers of Chinese immigrants with Jheng Cheng-gong, also known as Koxinga in the West, in 1661. He notes, nevertheless, that Chinese and Japanese scholars unanimously provide negative assessments of the state of Buddhism in the island between the Jheng years and the Japanese occupation in 1895.

Following a very lengthy two-page quotation from the 1971 Gazetteer, which is described as based on a "source of questionable reliability," most of the remainder of the chapter consists of a description of jhaijiao, Buddhist sects also known as the vegetarian religion, or Lay Buddism. Fifteen pages are devoted to this form of Buddhism that exists outside the traditional and orthodox Chinese version. There is a general overview of its doctrine followed by rather detailed accounts of its three main sects, their various sub-sects and the complex histories of their internal governance.

Part II of Jones' book--the Japanese colonial period--consists of two chapters of equal length that deal respectively with the early period, up to about 1915, and the later period until Retrocession when Japanese rule of Taiwan officially ended on Oct. 25, 1945.

The first of these chapters, "The Early Japanese Period," describes the introduction of Japanese Buddhism to Taiwan and its adoption mainly by those who needed good relations with the government, but it concentrates mainly on what are described as the four great lineages of Taiwan Buddhism. These are seen as representing the arrival in Taiwan of the lineages that would predominate during the Japanese occupation as well as being the beginning of full monastic ordinations in the island. Their significance is identified as providing a formal network for temples, the means for a more widespread dissemination of Chinese ordination lineages, and an increased attention paid to Buddhist education for nuns.

The second chapter of Part II, titled "Buddhist Associations and Political Fortunes During the Late Japanese Period," examines both the attempts to create national Buddhist organizations and a greater degree of interaction and cooperation between the Chinese Buddhist groups and the Japanese authorities and schools of Buddhism. It relates how a number of major anti-Japanese insurrections and minor revolts between 1895 and 1915, of which one of the more serious had associations with Buddhist meeting places, led to efforts to establish island-wide associations and improve relations with the occupying power. The greater part of this chapter provides descriptions of four such associations, reviews the impact of the Japanization policy on religious restructuring and examines the consequent erosion of jhaijiao Buddhism.

In his conclusion to Part II, Jones accepts the general belief of most Chinese scholars working in Taiwan that the Japanese occupation had little influence on the island's religion, at least on the uneducated and working classes, though the author believes that the Japanese administration had an "enormous impact on those whose occupations and aspirations brought them into contact with the government."

The four chapters of Part III of "Buddhism in Taiwan" deal with the experiences of Buddhism in the post-Japanese period up to 1990. The first, "Retrocession and the Arrival of the Mainland Monks," reviews the developments in the period between Retrocession--the term used to describe the return of the island to Chinese rule--and the arrival of the retreating Nationalist government in 1949. It recounts the reorganization of Taiwanese Buddhism following the expulsion of the Japanese and the efforts to create a Taiwanese Provincial Buddhist Association that, however, submitted itself to the Buddhist Association of the Republic of China newly reconstituted in Nanjing. Jones sees this submission as related to the preceding "February 28 Incident" of 1947 and its ruthless aftermath, and the need to cooperate with the government.

The book next looks at the operations of the Buddhist Association of the Republic of China because reforming the island's monastic ordination system was listed as one of its missions when the association accompanied the Nationalist government in its retreat to Taiwan. Of interest in relation to the social and economic changes that were occurring in Taiwan in the 1950s is Jones' examination of the viability of the nuns' order after 1952. He notes that since the first ordinations in that year, nuns came increasingly to outnumber monks. He observes that there are no scholarly studies that investigate this phenomenon but offers various hypotheses, such as the opinion most commonly voiced in Taiwan--that women are simply more religiously inclined than men. The chapter reviews the involvement of that specific Buddhist association in various international contexts but concludes that it failed to become a unifying force for Taiwan Buddhism.

The final substantive chapter of "Buddhism in Taiwan" is titled "The Period of Pluralization" and will be of particular relevance to readers whose primary interest is in the contemporary situation. It refers to the proliferation of Buddhist organizations and groups in Taiwan; other than BAROC, after Retrocession, some of which, in Jones' words, "articulate a new vision of Buddhist life and practice that has been explicitly adapted for Taiwan's current social and religious needs." The factors behind the pluralization are considered both internal and external to the Buddhist Association of the ROC itself. The latter include the lifting of martial law and the 1989 Revised Law on the Organization of Civic Groups that made possible the formation of other Buddhist groups to compete with the Buddhist Association of the ROC.

Among those groups, the chapter gives prominence to the Fo Guang Shan, an order that promotes humanistic Buddhism and is one of the major charity organizations in Taiwan, as well as the larger Buddhist Compassion Relief Tzu Chi Foundation that has similarly adopted "Buddhism in the Human Realm" as a guiding principle and is also very active in humanitarian activities worldwide.

In a short six-page final chapter, Jones lays out his conclusions to his presentations made in the book. These include the opinion that, at least in terms of the institutional development of Buddhism in Taiwan and its relationships with the various governments under which it has lived, it holds a unique place in the overall history and development of Chinese Buddhism.

Particularly striking elements of its characteristics are noted as the response to the economic boom of the 1960s and 1970s, which meant that vastly increased donations were forthcoming, and the Nationalist government's separation of church and state, whereby Buddhist clergy are now treated as ordinary citizens with all the rights and responsibilities entailed by that status. A final comment observes that Buddhist attitudes toward social issues and social actions are changing and that, from a sociological point of view, Buddhism in Taiwan is struggling with issues of identity and status. Perhaps in this way, it may be seen as no different from the position of other major religions in an increasingly industrialized and secular world.

There is no doubt that this is a scholarly work based on fieldwork in Taiwan and making use of a number of original and secondary sources. "Buddhism in Taiwan" is, however, a blend of very detailed descriptions of individuals and temple lineages. The more broadly based trends shown in the volume, however, has made it a difficult book for general lay readers whose interest in the topic is likely to focus more on its political, economic and social aspects than on the minutiae of the contributions of individuals.

There is a substantial bibliography with many entries in Chinese and a number in Japanese, though one source quoted, often at length, on many occasions--the 1971 Gazetteer--is apparently nowhere fully referenced. There is a glossary of Chinese characters for proper names for the benefit of those readers whose prime knowledge of Chinese is based on a romanized system but may require reference to the traditional ideograms. The index, however, is very brief--barely two pages in length.

Given the theme of the book, there is one surprising omission; that is, an indication of the number of Taiwan's population professing adherence to Buddhism. Admittedly, it is difficult to obtain accurate data for such a purpose since the Taiwanese authorities do not collect or independently verify statistics on religious affiliation, but maintain registration statistics voluntarily reported by religious organizations. These data, however, may well be inflated since they are liable to include many people who regularly contribute funds to these organizations without any real interest in their Buddhist teaching.

Nevertheless, on this basis the Ministry of the Interior indicated in a April 2006 report that 35 percent of the people of Taiwan, about 8 million, considered themselves Buddhist, a figure that has apparently grown substantially since a government claim of 4.8 million, or about 20 percent of the population, in 1990. It would be interesting to know something of the relationship between the changes in the status of Buddhism, especially during the period of pluralization, and the number of adherents, despite doubts about the reliability of the statistics.