Colombo, Sri Lanka -- On the occasion of the 25th Anniversary of its existence, the Buddhist and Pali University of Sri Lanka has published in 2007 a commemoration volume appropriately titled Buddhist and Pali Studies. The volume consists of 34 articles by erudite scholars on Buddhism and related subjects, 13 in English and the balance in Sinhala. This review is confined to the English articles. 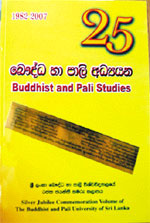 A note from the Editors is published in Sinhala as an introduction but an English translation is not provided and would have been useful to the English readers.

This University was established by an Act of Parliament and was ceremonially inaugurated on 22nd August, 1982. In an article on the scope and focus of the syllabuses of the Buddhist and Pali University, its Senior Prof. of Buddhist Philosophy, Oliver Abeynayake, states that among the objectives of this University, the generation of Buddhist scholars who are capable of propagating Buddhism and fostering Buddhist missionary activities both in Sri Lanka and overseas is emphasised. The Development of the study of Pali, Buddhist culture and Buddhist philosophy is entrusted to this University to elevate such studies to suit the contemporary conditions.

There are two faculties in the University, one for Buddhist studies and the other for language studies. In the Faculty of Buddhist Studies there are facilities for the study of Buddhist Philosophy, Buddhist Culture, Buddhist Art and Architecture, Comparative Religion and Philosophy. Facilities to learn Pali, Sanskrit, Sinhala, English and Korean are provided in the Faculty of Languages.

In an article on "A Critical Analysis of the Pali Dathavamsa", the Vice-Chancellor of the University, Ven. Prof. Wegama Piyaratna Thera refers to the origin and development of the concept of relic worship and its expansion in India during the Asokan period and subsequently in Sri Lanka. In fact it is stated that after the arrival of Arahat Mahinda the practice of Relic worship was firmly established in the island.

In his article on "System of Monastic Management as depicted in the Vinnaya Pitaka," Ven. Prof Gallelle Sumanasiri Thera refers to the management in earning the four basic requisites by monks, namely, food, clothing, shelter and medicine. According to the Vinaya the right time to eat solid food for monks is from sunrise to sunset and that they should be content with little food, enough to sustain their body in a healthy condition. In collecting the food they should follow the bee theory (taking honey from the flower without causing harm) and should not be a burden on the community on which they depend.

Much information on the development of Bodhisatva ideal and eight prominent Bodhisatvas in Mahayana are given by Ven. Dr. Ittademaliya Indrasara Thera in his article by the same title. The word Bodhisatva in Buddhist text refers to the being aspiring to be the fully Englightened One i.e. Samma Sambuddha. He quotes from many Suttas where reference is made to Bodhisatvas. The Acariya Abbhuta Dhamma Sutta discloses the Buddha’s previous life in the Tusita heaven and how the Boddhisatvas acquired extraordinary characteristics when they were born in the human world.

In his article on "The Suttanipada and the Life of pre-monastic Buddhist Cenobites", Ven. Dr. Pategama Gnanarama Thera examines the place of the Suttanipada in the Pali Canon with reference to its subject matter and refers to the historical evidence to ascertain its antiquity.

Senior Prof. Asanga Tilakaratne in his article "Huan Zang and Fa Hsien on the History and Religion of Sri Lanka" examines the contribution of their accounts for the understanding of the history of Buddhism in the island in particular and the region in general. Fa Hsien had been in India and Sri Lanka for 15 years from 399 to 414 and the last two years was in Sri Lanka to find the vinaya texts of early Buddhist scholars. Among many other things Fa Hsien had mentioned that at the Maha Vihara 3,000 monks had resided at that time and at the monastery called Chatiya, identified as the Mihintale of today, housed 2,000 monks. He says that both these travellers describe the festivities associated with the worship of the Tooth Relic, the religious life of the people, both monks and layman, which was not devoid of popular aspects such as relic worship. There is also much information on the nature of the Sangha.

"Motivation from a Buddhist Perspective" is the title of the contribution of Ven. Bhikkuni Dhammananda, a Ph.D student. She mentions some of the common motivations such as cetena-volition; manasikara-reflection; chanda-wish, saddha-faith; tanha-craving etc. The subject is discussed under three areas, namely, motivations as a complex psychological force, Buddhist ethical view on motivation and the Buddhist way of transforming motivation. She concludes that the Noble Eight Fold Path is the means to cultivate motivation not only for virtue but for deliverance from subjective and psychological suffering.

Prof. Daya Edirisinghe deals with the development of Buddhist thought in the Korean peninsula. Buddhism was introduced into this region in the 4th century and he discusses its progress and development concluding his presentation with its contribution to the Buddhist world. Among them is the spread of Buddhism to Japan through Korea.

The late Dr. Padmal de Silva discuses culture and obsessive compulsive disorders, a major anxiety disorder characterised by unwanted, intrusive cognitions which are recurrent and persistent, their diagnosis and treatment.

In her contribution Ms. Dilma Thusari Koggalage deals with mural paintings as a historical source with special reference to temple paintings of the Kandyan tradition. She quotes Dr. Ananda Coomaraswamy who has said in his "Medieval Singhalese Art" that the murals at the Degaldoruwa Rajamaha Viharaya are priceless historical documents. The theme of the mural was Jataka stories and events in the life of the Buddha and she deals with a number of murals of the Kandyan era.

Mrs. Sasni Amarasekera’s article is on "The difference between Site based and Landscape based Approaches to Cultural Heritage Management" while the contribution of R. K. A. N. Rathnasiri is on "Post Colonial Voice in Sri Lankan Poetry in English".

The 13 English articles in this publication covers a wide range of Buddhist subjects such as its philosophy, discipline, culture, historical developments as well as art and architecture. They encapsulate a wealth of information on the Dhamma and is presented in a manner that an ordinary reader is able to comprehend. The print is satisfactory, printers being Tharanji Printers of Nawinna, Maharagama.

A serious deficiency is in the proof reading with many errors mostly of a typing nature in several pages of the publication. Those responsible should have paid much more attention to this important aspect.

The volume is priced at Rs. 1,000/- per copy. Considering the material in the English articles, especially information not usually available in normal Buddhist literature, one could say it is not too high a price. However, to enable more readers to benefit from this publication it would have been good to have made an effort to price it a little lower.

All in all it is an excellent publication to commemorate the 25th anniversary of the Buddhist and Pali University of Sri Lanka, which has played a leading role in the revival and internationalisation of higher Buddhist education.